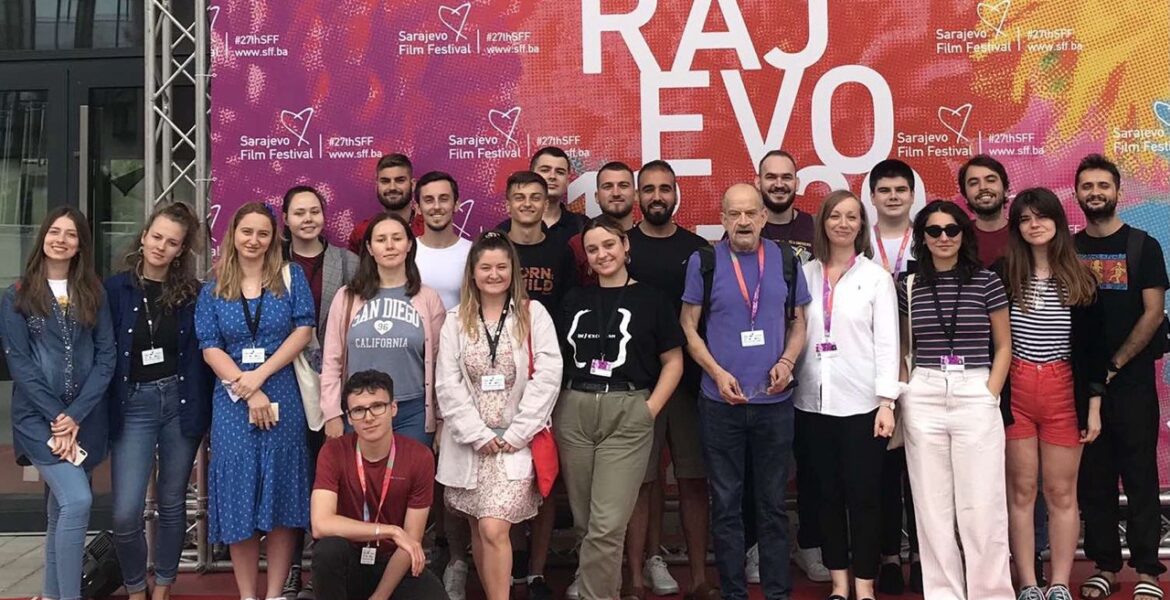 A Norman in Sarajevo

I find myself in a strange place, on one hand, I have paragraph after paragraph that begs to be written, and on the other, I feel that all words, in all languages would do no justice, would not capture the true essence of the wonderful experience I had in Sarajevo; as one of the selected few, to be part of this year’s In Youth Eyes Project, namely the Dealing with the Past Program, organized by the Sarajevo Film Festival (SFF) and the Regional Youth Cooperation Office (RYCO), in cooperation with the Forum Civil Peace Service-forumZFD and the USAID project PRO-Future. I’ll give it my best, and try in some way or form, to freeze here a bit of the magic.

During the Film Festival’s week, here and there around the city, you can notice signs which translate to: “My Sarajevo, My Story” and by some strange coincidence or whatever it may be, that’s the only way I can talk about my experience. Giving you just a rundown of what we did, discussed and saw, it would take all the jewels from the crown and simply wouldn’t work for me. So what made this story tick? After all, great stories have a few distinguishable elements that separate them from the rest.

Much was discussed in the workshops we attended, led by colorful and remarkable panelists, each of them adding their signature to the Dealing with the Past Program, but for me at least, a few and crucial common themes emerged; and for good reasons.

Truth… I worship and continuously search for it, and what the mosaic of all our inputs throughout the workshops presented, was that it is the foundation of the cities, the civilizations, and the lives that we build. And if we try to cover, hide, alter, or destroy these foundations, all our cities, our civilizations, and our lives will come to crash. The only way to support them, healthy cities, healthy civilizations, healthy lives, is to accept the truth, whatever it may be, however hard it may be.

The Balkans, as all know too well, especially we from the region, has a tendency to produce maybe too much history, or not properly digest it. I don’t have the solutions and neither will claim to have them, but as I look around the world, I see that only those societies, those cultures that have dealt with their past, naturally in their own fashion, but always accepting it, are the ones we admire and try to emulate. Let me give you an example, I have had the pleasure and honor to visit Japan, in particular, the city that all the world knows, Hiroshima. I was stunned by its beauty, but more so enthralled by its people, and in one conversation we once had, with a lovely Japanese lady that was talking to us about the consequences of the atomic bombing of Hiroshima, she mentioned that we too know our war crimes. To me, that is applaudable and courageous and a true mark of wisdom. The past is the past, we have only the now and how we choose to shape tomorrow.

In one of the films that we had the pleasure to see, a character says that “There’s nothing new under the sun.” Maybe that is true, and we are doomed to repeat the mistakes of the past, but I refuse to believe so, and not because it is my idealistic wish, but because I have seen what programs such as these, organized by teams of incredible people can do.

Above all, they foster and celebrate individuality. And to me at least, Individuality is the Antidote to the Chaos and Madness of All Ages. Yes, we are human and deeply flawed, but we, through our choices alone, individual choices, can make better decisions, and equipped with the truth, can build the future we want.

Forgive my enthusiasm and idealism, I know I will make mistakes in the future, but I will not make the mistakes of the past, and I believe my new friends won’t do the same as well.

And talking about them, if the excellent discussions and thought-provoking movies we watched were a fine quality dinner, they were a divine dessert ????????. I met artists and scientists, some lost brothers ????, potential business partners ???? and simply unique and great individuals. If you are reading this, you know who you are, I miss you guys, I had the absolute pleasure to talk with all of you, with some more, with some less, but I equally can’t wait to meet all of you again.

An amusing remark was mentioned, two or three times throughout the week, that I was quite the extroverted individual. The wisdom of the internet always defines me as an introvert, and I wouldn’t disagree. So, for lack of words, if I played my part well, it was because of the wonderful team of participants and organizers. Their good energies and vibes fed my soul with such positivity, that now, after the program is all done, I consider myself “reborn”, thank you, faleminderit, fala, vala, hvala, ti blagodaram!

(Note that if any of the above is wrong ????, Martina, Monika and Haris are to be contacted.)

The Western Balkans has talents and I say not just to my new friends, but to all young people from the region, best captured in RYCO’s motto: “A better Region starts with youth.”

I see that maybe I have gone on for too long, and you my dear readers deserve some rest, but before I let you go, I would like to mention just one last thing. This thought sparked as a result of a scene in one of the movies we saw, where an old man stopped a fight between two “different” groups by saying to his people, that those on the other side are our brothers; that stuck with me. We’re more similar than we think we are, 5 minutes, no more, maybe while eating a meal or last-minute shopping, and we’ll rediscover our bonds. Whatever fate and history throw our way, we’ll always find a way to be back with each other.

My name is Klajdi (or Pigeon/Meme Master to some ????) and this was My Story of being part of SFF’s In Youth Eyes Project.