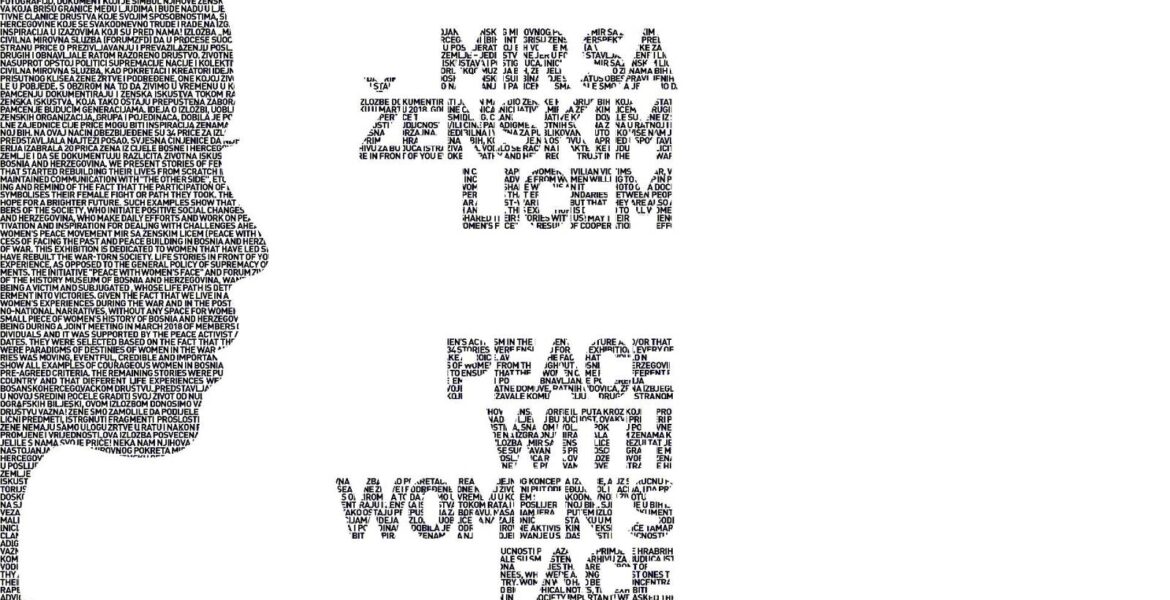 ABOUT THE EXHIBITION “PEACE WITH WOMEN’S FACE”

The exhibition entitled “Peace with Women’s Face” is a result of cooperation and efforts of the women’s peace movement Mir sa ženskim licem (Peace with Women’s Face) and Forum Ziviler Friedensdienst (forumZFD) to integrate a female perspective in the process of facing the past and peace building in Bosnia and Herzegovina and present the women’s side of the story about the survival and overcoming the consequences of war. This exhibition is dedicated to women that have led small (and big) fights for their rights and rights of others in the post-war Bosnia and Herzegovina and have rebuilt the war-torn society. Life stories in front of you are new pages of history of this country and are unique, because they focus on women and personal experience, as opposed to the general policy of supremacy of nation and collectivity over individuals and marginalisation of women’s experiences and accomplishments.

The initiative “Peace with Women’s Face” and Forum Ziviler Friedensdienst, as initiators and authors of the concept of the exhibition, supported by the experts of the History Museum of Bosnia and Herzegovina, wanted to free the discourse about women in Bosnia and Herzegovina from the omnipresent cliché of woman as being a victim and subjugated, whose life path is determined by her sex and nation, and to show the kaleidoscope of destinies of women, who turned their disempowerment into victories. Given the fact that we live in a time where we always refer to memories and remembrance, we believed that it was important to also document women’s experiences during the war and the post-war Bosnia and Herzegovina. The remembrance in Bosnia and Herzegovina is exclusively tied to the three ethno-national narratives, without any space for women’s experiences, which are left to oblivion. Our intention was to organise the exhibition in order to document a small piece of women’s history of Bosnia and Herzegovina, which will be permanently remembered by the coming generations.

The idea about the exhibition came into being during a joint meeting in March 2018 of members of the initiative “Peace with Women’s Face” and other peace building and women’s organisations, groups and individuals and it was supported by the peace activist and expert Tamara Šmidling. Members of the initiative proposed women from their local community as candidates. They were selected based on the fact that their stories might be an inspiration for other women’s activism in the present or future and/or that their lives were paradigms of destinies of women in the war and post-war Bosnia and Herzegovina. In such a way, 34 stories were for the exhibition. Each of these stories was moving, eventful, credible and important for the publication. The more difficult it was to make a choice. Aware of the fact that it would not be possible to show all examples of courageous women in Bosnia and Herzegovina, the committee selected 20 stories of women from throughout Bosnia and Herzegovina based on pre-agreed criteria. The remaining stories were put in an archive for future research. Care was taken to ensure that these women came from different parts of the country and that different life experiences were documented.

Personal histories that are in front of you evoke empathy and help regain trust in the post-war society of Bosnia and Herzegovina. We present stories of female returnees, who were among the first ones to return to their pre-war homes, war widows, women refugees that started rebuilding their lives from scratch in a new country, women who had been at concentration camps, raped women, civilian victims of war, women that maintained communication with “the other side”, etc. In addition to biographical notes, this exhibition also includes advice from women willing to help in peace building and remind of the fact that the participation of every woman in our society is important! We asked the women to share with us an item, a photo or a document that symbolizes their female fight or path they took. Their personal items and torn fragments remind of experiences that erase boundaries between people and give hope for a brighter future.

Such examples show that women do not only have the role of a victim in the war and post-war period, but that they are also active members of the society, who initiate positive social changes and values as a result of their abilities, strength and will. This exhibition is devoted to all women of Bosnia and Herzegovina, who make daily efforts and work on peace building. We kindly thank those women, who shared their stories with us! May their experiences be a motivation and inspiration for dealing with challenges ahead of us!

Link for the catalogue: http://www.dwp-balkan.org/cms_dwp/userfiles/file/20190307_KATALOG_MSZL_web.pdf