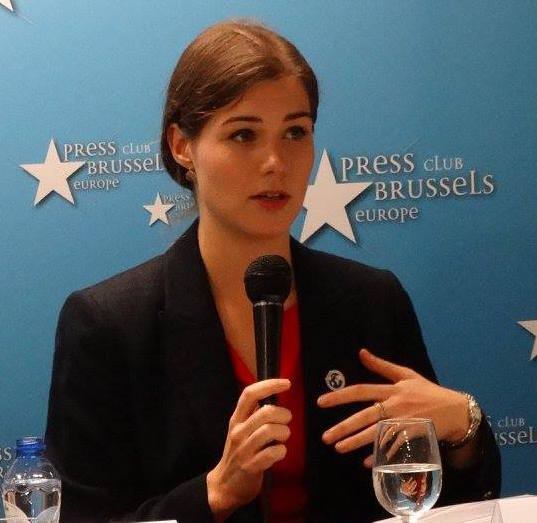 In 1999, I was nine years old. I don’t remember seeing U.S. news coverage on the war in Kosovo. In fact, I wouldn’t learn about Kosovo or the war until nearly a decade later.

I first visited Kosovo in 2010. A shopkeeper asked me where I come from.

I wasn’t sure how to respond. How odd, I thought, for someone to thank me for a decision made by a U.S. president long before I could vote, pay taxes, or comprehend a world beyond America’s borders.

After moving to Pristina for work in 2011, I encountered similar reactions. Upon learning that I’m from the United States, baristas, taxi drivers, friends’ parents would thank me for America’s role in ending the conflict in Kosovo.

When I lived in the United States, my nationality was a small piece of my identity, rarely felt. It did not distinguish me from, nor connect me to, friends and colleagues. I perceived no domestic ‘other.’ Although, in Trump’s America, nationalist and anti-immigrant rhetoric appears to be redefining and narrowing the scope of ‘Americanness,’ for some, while also attracting domestic and international criticism of our leadership and political blunders.

During my time living in Frankfurt and Brussels, my nationality differentiated me only slightly from my European classmates, colleagues, and friends. This usually manifested as quips about guns or fast food.

In Armenia, my inability to communicate in Russian or Armenian was isolating. Many of my peers in Yerevan were more socially conservative than young professionals in European capitals (including Pristina), which also made socializing a challenge. A large Armenian-American diaspora in the United States contributes to relatively warm relations between our two countries. Nevertheless, Armenians with whom I engaged seemed to hold few preconceived notions about Americans.

In Kosovo, on the other hand, my Americanness takes on unique significance, inextricably tied to the past, to the war, to the United States’ and Bill Clinton’s legacy in Kosovo and in the Balkans. While not old enough to have contributed to the United States’ wartime legacy in Kosovo, two decades later it continues to shape both my personal and professional identity as an American living in Pristina.

As a foreigner working in Kosovo, I’ve played witness to the wartime narratives that continue to dominate domestic and regional socio-political discourse. I’ve studied ethno-nationalist and territorial conflicts from an academic perspective and focused professionally on Kosovo’s democratic development, power-sharing structures, and regional relations. Yet, as an outsider, it is difficult to fully understand, internalize, or empathize with the collective memory of violent conflict, the lasting and generational trauma, and the ethnic divisions which persist in Kosovo and in the region.

However, my inclusion in a group narrative tied to the United States’ 1999 intervention in Kosovo, despite not being a direct participant, provides a keyhole through which I can personally relate and begin to understand the persistence of wartime narratives and the rigidity of ethno-nationalist group belonging in Kosovo.

It appears that wartime narratives not only apply to conflict parties but also to external parties who intervened during and after the war.

The positive narrative of U.S. involvement in Kosovo has proven to be robust, persistent, and resilient. There is likely no other country in which U.S. influence and intervention are more applauded. Despite a sharp downturn in global opinion of the United States in recent years, Kosovo is perhaps the only European state whose acclaim for the United States has not dimmed. In January 2018, 75 percent of Kosovars approved of the current U.S. administration, the highest approval rating in the world.[1]

Even as American officials and corporations have faced public accusations of corruption and misconduct in post-war Kosovo, it is the narrative of U.S. intervention which persists most readily in defining relations with the United States and perceptions of Americanness in Kosovo.[2] The bond between Kosovo and the United States, one forged and solidified through war and conflict resolution, remains seemingly unshakeable.

It is important to note that pro-American sentiment is not shared by all groups in the Western Balkans nor is it universally held amongst Kosovo’s population. For some in the Balkans, specifically the Serbian government and many Kosovo Serbs, the 1999 NATO bombing campaign and U.S. intervention in Kosovo were considered acts of aggression, casting the United States into a role of instigator or perpetrator rather than that of peacemaker.

Amongst Kosovo’s majority-Albanian population, pockets of political society have questioned what is considered to be an American-imposed ‘neo-liberal model’ for development in Kosovo. In a 2012 interview, Vetëvendosje leader Albin Kurti critiqued the ‘micro-management’ and ‘neo-liberal policies’ of former U.S. Ambassador Chris Dell – deemed by Kurti as one of two ‘unofficial kings’ in Kosovo, alongside Pieter Feith, the former head of the (now departed) International Civilian Office.[3]

However, notions of ‘American exceptionalism’ appear to be far more prevalent in Kosovo than notions of American imperialism. American flags line the streets of Pristina on public holidays and wave in front of government buildings; a shiny new poster celebrating the friendship between Kosovo and the United States recently debuted behind the Bill Clinton statue on Bill Clinton Boulevard, the main street into the capital.

The vast majority of Kosovo’s population continues to regard the U.S. presence here in a positive light. Differing from my experiences in other countries, my Americanness is more often venerated than condemned in Kosovo. (While I’ve benefited from this, I do not personally subscribe to an ideology of traditional American exceptionalism and support a more critical approach towards externally-imposed reform and the strengthening of local ownership for domestic development processes in Kosovo.)

In Kosovo – touted as the most pro-America country in the world – I have found myself part of a generational narrative that has been passed down to me as a result of my nationality. The narrative surrounding U.S. influence in Kosovo shapes how I am perceived, on the surface, and the role that I am able to play professionally. It seems that, in one way or another, past and group associations forged and rigidified through conflict (and peacemaking) define each of us, and our political circumstances, regardless of our direct involvement.

My national group belonging is not as intimately tied to a narrative of collective or generational trauma or of group victimhood or perpetratorhood as many identity groups in the Balkans are. Yet, I have found that it is a public element of my identity which ties me to a collective past – America’s but also Kosovo’s.

Aubrey Hamilton first came to Kosovo in 2011, when she began working as a Key Researcher with the Group for Legal and Political Studies in Pristina, focusing on the Kosovo-Serbia dialogue and implementation of EU-facilitated agreements. She then went on to work with think tanks and NGOs in the United States, Germany, Belgium, and Armenia, focusing on conflict resolution, post-conflict development, and democratic transitions. Aubrey returned to Kosovo in 2017 as a Fulbright Public Policy Fellow in the Office of the General Secretary at the Ministry of Local Government Administration in Kosovo (2017-2018). She holds an M.A. in International Conflict & Security with Human Rights Law from the University of Kent’s Brussels School of International Studies