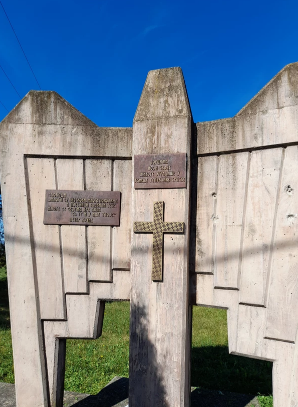 My adventure begins with my application to participate in Most Mira (Bridge of Peace) programme.

​ I came in Prijedor thinking that I know what has happened here, but I couldn’t be more wrong. As much as I didn’t know about the crimes committed in Prijedor, I also didn’t know much about “coexistence” in other places mostly because I came from a predominantly Bosniak background.  ​

On top of that I had no awareness about the existence of “two schools under one roof”, or how important the monuments are. I would like to shed some light on the monuments themselves and the non-existence of the same, which led me to think about how we allow ourselves to diminish the crimes that happened because we do not fight enough for memoralisation. Incredibly, on site of the former concentration camp there in Trnopolje, there is a monument engraved with the words “To the fighters who built their lives into the foundations of the Serb Republic”, although these same people have possibly committed crimes against Bosniaks and other smaller ethnic groups. You will not find a single monument or any landmark in Trnopolje that could indicate what was happening there in 1992, but you will find a school which was part of the concentration camp.

Children who attend that school today don’t know what happened there because they don’t learn in school about their history. Sadly, they only know the things that their parents have told them. This is not the case just in Trnopolje. In Omarska, where there was another concentration camp, there is not a single visible monument that would raise awareness of the crimes committed there and of their innocent victims. Those who lost their lives and those who survived but still carry the trauma of those events don’t deserve such treatment.

Authorities nowadays are just pushing these issues under the carpet. They don’t want to bring up this topic for a discussion. Sadly, the whole situation feels like tilting at windmills. In addition to the monuments that are very important for new generations, and which would serve as a constant reminder of the past events, it is very important to invest in the education of returnee children and those who are yet to return; to invest in infrastructure, economy and programmes where young people would be brought in and become familiar with these stories .Then, it would be possible for them to exchange ideas and opinion about how to help communities move forward, because only in this way can we show that there is still life here and that there will be hope for the future.

“One did not live here to die, one died here to live.”

In spite of those who committed these horrible crimes, we will fight so we never forget and never experience something like this ever again. All the people of this world deserve beautiful memories, not trauma.