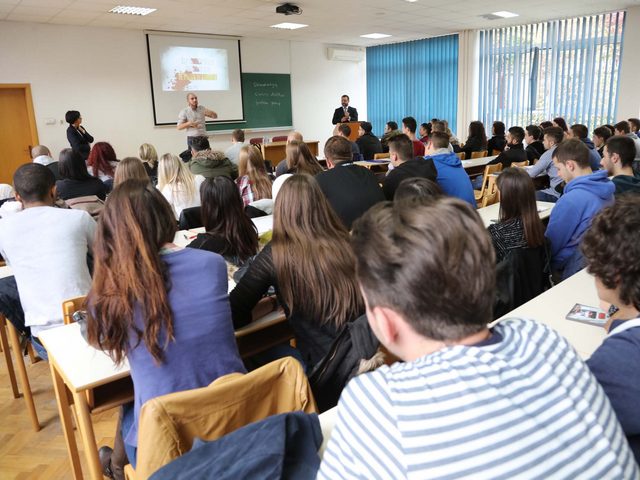 Sarajevo University’s law and political sciences faculties screened BIRN’s documentary ‘The Unidentified’, about the Serbian fighters responsible for some of the worst atrocities of the Kosovo war in 1999.

‘The Unidentified’, which investigates attacks on Kosovo villages in 1999 and names those involved in an attempted cover-up operation to conceal the crimes, was screened for students of communications, security, journalism and law at Sarajevo University on Tuesday and Wednesday.

“My idea was to make sure that, when people hear and watch this film, be it in Belgrade, Novi Sad or Kragujevac, they will not be able to say that no crimes happened in Kosovo,” the film’s director Marija Ristic said in a video message to the students.

‘The Unidentified’ was made as a result of two years of research, and takes viewers back to the villages of Ljubenic, Cuska, Pavljan and Zahac, near Pec/Peja in Kosovo, in the spring of 1999, when Serbian forces killed more than 118 Albanian civilians.

The victims’ bodies were burned or removed, and some of them were subsequently found in a mass grave at a police raining centre in Batajnica, near Belgrade, in 2001.

Eleven former members of Serbian forces are on trial in Belgrade for committing those crimes.

In February 2014, nine men were sentenced to a total of 106 years in prison, but the appeals court quashed the verdict in March last year, saying it was “incomprehensible and contradictory”, and ordered a retrial.

Midhat Izmirlija, a professor at the Faculty of Law, said after the screening that ‘The Unidentified’ was a great example of socially-engaged journalism.

“This is an excellent way for the media to work with the aim of determining the truth about certain events and presenting the truth to the victims and the public,” Izmirlija said.

Lejla Turcilo, a professor at the Faculty of Political Sciences, said it was very important for young journalists to be exposed to such works of research works during their studies.

“Our students do not come across these type of stories while studying theory. Our goal is to offer them practical experiences, which they lack during their education, but it is important not to always engage in daily journalism, but in investigative journalism, which is scarce,” she added.

She said such projects could motivate students by “showing them there is a possibility for making changes in society”.

Following the screening of the documentary, the Law Faculty students had a lecture and held a discussion on the legal challenges involved in monitoring war crime trials, while the students at the Faculty of Political Sciences had a discussion on journalism and transitional justice with BIRN Bosnia and Herzegovina editor Denis Dzidic.