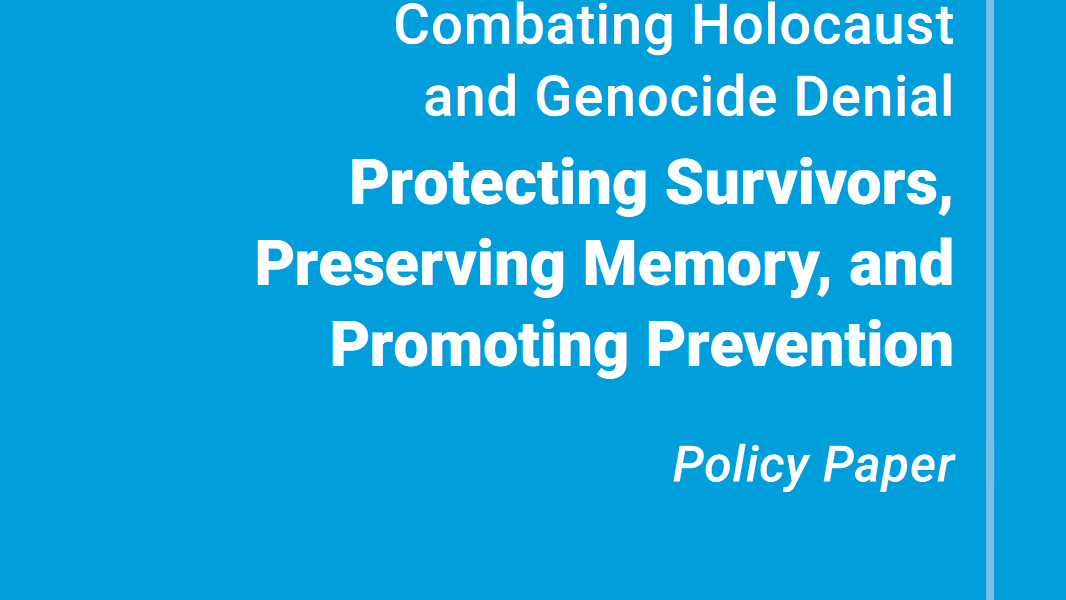 Hate speech has been known to stigmatize, marginalize, enable discrimination as well as incite hate crimes and large-scale violence. Genocide and Holocaust denial is often tied to hate speech, specifically when the aim is to target individuals or groups based on specific identity factors. The most serious cases of genocide and Holocaust denial can constitute incitement to discrimination, hostility, or violence, and to genocide.
Historical experience has shown us that such violence often includes denial of past violations and is almost always preceded by online and offline hate speech – or any kind of communication in speech, writing or behaviour that attacks individuals or groups based on their identity. In our world, such dynamics continue to spread like a wildfire, contributing to the perpetration of genocide and other atrocity crimes.
Despite our pledge to “Never Again,” our world continues to be afflicted by violence of genocidal nature. We remain very concerned about persistent distortions of the historical reality of past genocides,including in Rwanda and Srebrenica, and of the glorification of perpetrators that often accompanies them, including with hate speech. We are also extremely worried about the increasingly frequent distortions of the Holocaust’s scope and intentionality. Holocaust denial is rooted in Antisemitism. We have seen for instance how antisemitic conspiracy theories concerning COVID-19 became prevalent in mainstream discourse following the emergence of the pandemic. We have also seen the Holocaust and its symbols being trivialized in anti-vaccine protests. Genocide and Holocaust denial constitutes a warning sign of societal fragility and of the enduring presence of the conditions that have allowed large-scale hatred and violence to erupt in the past. The impact of denial in generating fear among victims of past atrocity crimes is also unquestionable, as it can inspire and fuel hatred of, or even incite violence against, communities that previously experienced atrocity crimes. This sense of vulnerability is particularly enhanced when denial comes from government officials and is manifested through state-sponsored media. In the same vein, glorification of perpetrators of genocide and atrocity crimes can constitute an insurmountable obstacle for accountability and can enhance their ability to fuel further hatred and violence. Glorification equalizes criminals and victims, emboldens the former to consider their past actions as positive and commendable and raises the risk of potential commission of such crimes in the future.
Genocide and Holocaust denial turns perpetrators and war criminals into heroes and heroines.
It sows fear, mistrust, and hate. It divides people, communities, and states. It does not allow for
healing and empathy. It also undermines the judicial decisions that have been made and therefore undermines justice. This is to the contrary of what societies which have experienced conflict and have a legacy of atrocity crimes require. It is unacceptable and must be condemned.
We therefore need to address genocide and Holocaust denial urgently and firmly, and this must be done in full respect of international human rights standards and of freedom of opinion and expression. Addressing this phenomenon through legislation should only be used for the most serious instances where genocide and Holocaust denial reaches the threshold of incitement speech, for which the Rabat Plan of Action on the prohibition of advocacy of national, racial, or religious hatred that constitutes incitement to discrimination, hostility or violence provides clear guidance.
Moreover, we need to look beyond legislative measures and use comprehensive policy measures encompassing the overall short, medium, and long-term dimensions of denial, for which sustained action in the fields of awareness raising, and education is also essential.
This Policy Guidance on Combating Genocide and Holocaust Denial includes a rich and broad range of suggestions for national governments, the United Nations system, and other relevant actors, including social media, to address this phenomenon. I urge the widest possible dissemination and implementation of this Policy Guidance so that we can collectively work to tackle genocide and Holocaust denial and help increase collaboration on these issues among relevant stakeholders to build more peaceful, inclusive, and just societies.

Alice Wairimu Nderitu,
Under-Secretary General,
Special Adviser to the Secretary-General
on the Prevention of Genocide