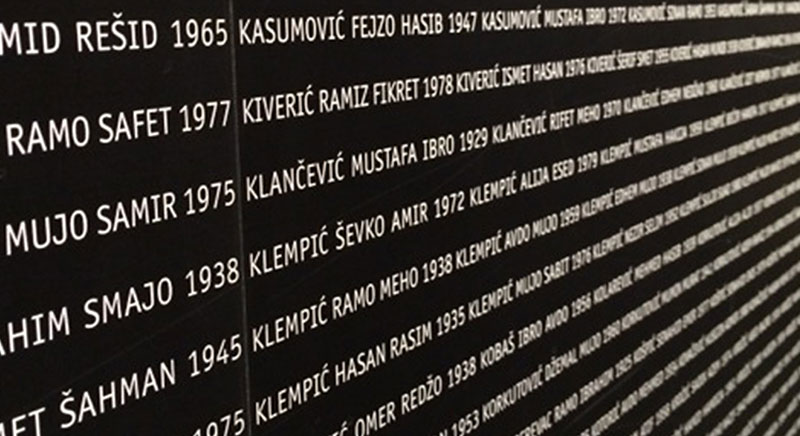 Denying wartime horrors is now a criminal offence in BIH

Denial of genocide and other war crimes, that is likely to incite violence or hatred, is now prohibited by law in Bosnia-Herzegovina. Since last 23 July, the Bosnian criminal code provides for sanctions against those who glorify war criminals or deny genocide, crimes against humanity or war crimes. This is an important step forward especially since such hate speech was on the rise in the country.

On 23 July 2021, High Representative for Bosnia and Herzegovina (BiH) Valentin Inzko imposed amendments to the Criminal Code of Bosnia-Herzegovina. From now on, glorification of war criminals convicted by final and binding judgments, as well as denial of genocide, crimes against humanity and war crimes, can be punished.

“To provide a fuller sense of justice to survivors in particular, and to society as a whole, the prosecution of perpetrators only will not be enough“, said Selma Korjenić, Head of the BiH Program at TRIAL International in her speech before the United Nations Security Council regarding the situation in BiH in 2019. “In order to normalize relationships between individuals, as well as between communities, we also now need to fight the denial that such crimes were even committed.“

More than a quarter century after the end of the war, many victims and their relatives believe that this recognition of past crimes is an essential ingredient for a peaceful and prosperous future. “No one can bring my parents back”, said Slobodanka Macanovic, who is still searching for the remains of her close ones. “This law would give us the respect we deserve and a promise that no one, nowhere would ever deny the war crimes that took place. It is a pledge to future generations.”

forumZFD and TRIAL International welcome the adoption of this law, especially since it comes at a time when acts of negationism are becoming increasingly commonplace in Bosnian society. Examples of these ideologies are numerous: renamed public spaces, murals glorifying war criminals, activities of fascism-related associations, rewriting of school textbooks… TRIAL International has taken up the issue since 2019,  including by partnering with forumZFD to advocate for a regulation that would prohibit this kind of discourse in the public sphere, as well as organizing public discussions to open the debate in the public arena and raise awareness among Bosnians.

The amendments imposed by the High Representative should contribute to BiH’s effort to deal with its past. The institutions will now have a solid basis for punishing genocide or war crimes denial, as well as those who glorify convicted criminals.