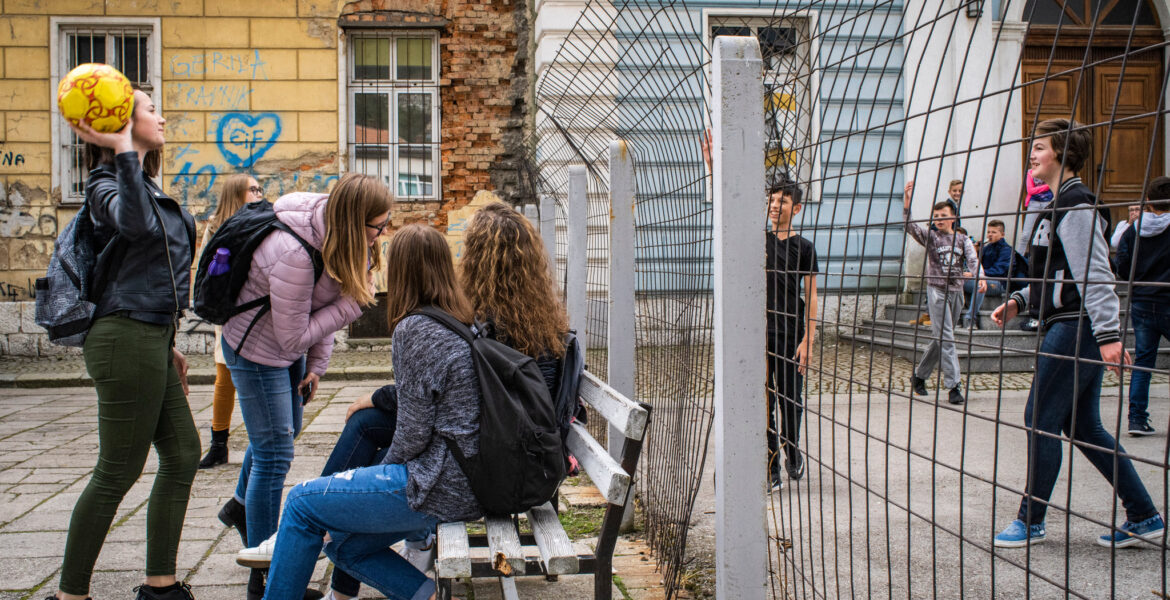 TRAVNIK, Bosnia and Herzegovina — The school in this medieval town is divided by a flimsy metal fence and the legacy of war.

Each day, children stream into the same school building, only to study separately, using separate textbooks, while learning in different languages. The ethnic Croatians from the suburbs are taught in the right side of the building. They are mostly Roman Catholics. The Bosnian Muslim students who live mostly in the city are taught in the left side.

For many of the students, the split is an unwanted relic of Bosnia’s ethnic wars of the 1990s among Serbs, Croats and Muslims.

“They don’t want us to socialize in school,” said Iman Maslic, 18, a Muslim student, ”so we go to cafes after class and hang out together there.”

But unwanted or not, the divide is deepening in a Bosnia where nationalist politicians are again stoking ethnic rivalries.

The school in Travnik, an ancient capital of the Ottoman province in the Balkans, is emblematic of a part of the country’s education system known as “Two Schools Under One Roof.” It was built in the late 19th century, when Bosnia was an outpost of the Austro-Hungarian empire.

The Roman Catholic Church owns the building today and operates the school and seminary on the right side. On the left is the state-run high school that controlled the building during the Communist era in the former Yugoslavia.

The church wants to evict the state school, but the two sides — the Croats and predominantly Muslim Bosniaks — remain entwined by the legacy of the Dayton Accords, the American-led treaty that ended the war.

The treaty brought peace but, in doing so, effectively engraved ethnic and religious divisions by carving out turf for the Serbs, Croats and Bosnian Muslims. And these divisions are often most evident in the segregated schools, a system that critics warn risks perpetuating the ingrained animosities in the broader society.

In recent years, the Organization for Security and Co-operation in Europe that oversees education in Bosnia has pushed to discard the system of segregated education, warning that “ethnically oriented curricula” impede reconciliation, perpetuate divisions, “limit economic development and jeopardize the long-term stability and security.”

In one school in the central city of Jajce, students successfully rebelled, demanding to be allowed to study together after a local minister wanted to separate Muslim students from their Croatian classmates.

But the system remains.

There are at least 50 schools around Bosnia in which students of different ethnicities are separated within the same building and studying on different floors, in different shifts or on different sides of the same building. An entire generation is growing up learning history, literature, art, music, math and science from textbooks designed by law especially for ethnic groups.

In Bosnian politics, nationalist figures silently condone segregated education, but some young politicians — including many who graduated from the segregated system — are calling to abolish the system.

“We do not want to send our kids to Two Schools Under One Roof,” Lana Prlic, 25, a member of Bosnia’s Social Democrat Party, said on her Twitter account during a recent election campaign. “That’s why we are fighting for a COUNTRY FOR ALL OF US.” Born during the war to a Croat father and a Bosniak mother, she graduated from the segregated high school in the city of Mostar.

Disunion is codified in Bosnia, which since the war’s end has been divided between a Serbian autonomous region and a Muslim-Croat federation. Governance structures are immensely complicated, with the office of the presidency divided into three elected positions, one each for Bosnian Serbs, Croats and Bosniaks. National elections in October saw angry appeals for ethnic loyalty.

Croat nationalists are especially resistant to changing this divided system, largely because establishing multiethnic, state-run schools would be an obstacle to carving out a Croat-only autonomous region in Bosnia, akin to what the Serbs have achieved in the war through brutal campaigns of expulsions and mass killings of non-Serb population. The Croats did not achieve that in the war, but nationalists have been pursuing it ever since peace took hold.

“Since the end of the war, the hard-line nationalists — fighting for a Croat ethnic identity and its own mini state in Bosnia — have turned the school into a battlefield,” said Adisa Busuladzic, a political analyst and a writer in Mostar.

The school in Travnik, a town 56 miles west of the capital, Sarajevo, embodies the divided country.

The right side for Croat students has been newly refurbished and painted blue by the Catholic Church. The left side for all other students has been left with chipped bricks and peeling yellow paint. Classes are staggered, with a half-hour gap between the two sides, to prevent students from socializing during breaks.

Then there’s the sprawling, indoor gym that only the Croat students use, while all those in the state school attend gym classes in the nearby park, including during hot summers and cold winters.

As the president of Bosnia’s Association of High School Students, Ms. Maslic regularly talks with students from all over the country about how to overcome institutionalized segregation, short of quitting school. To get an education, she said, many students have developed lives parallel to the ethnically divided reality.

“We are separated on paper, not in real life,” Ms. Maslic said.

Language is also a barrier, if a seemingly artificial one.

Like the territory of Bosnia, its common tongue — a Slavic language that was once known as Serbo-Croatian — was divided into three in the Dayton accords. Serbian stands apart because of the Cyrillic alphabet. But when spoken, Bosnia’s three official languages sound similar, if largely distinguished by regional dialects.

“Honestly, there’s really not much difference in how we speak,” said Gabriela Zlatunic, an 18-year-old student who identified herself as an ethnic Croat during an interview at the segregated school in Travnik.

“We understand each other, and there are no differences between us outside of the school,” Ms. Zlatunic said.

Segregated schools first sprung up after the fighting ceased in 1995 in Mostar, a divided town on the Neretva River that Croats want as the capital of their own region. During the war, Croats drove Muslims from their homes on the west bank of the Neretva and blew up bridges behind them.

Today, Mostar’s elite high school sits on the former front line. Students from both sides of the town attend classes on the first two floors, sharing some classrooms and the chemistry and biology labs — although they never attend classes with members of the other ethnic group.

The third floor is occupied by an integrated international school with students from across Bosnia.

“It’s segregated schooling in the floors below us,” said Mark Feltham, the head teacher of the United World College, during a recent interview in Mostar. “It’s obviously not ideal,” Mr. Feltham said, but cautioned against legislating against it entirely because Mostar, Bosnia’s fourth-largest city, is still reeling from the war.

“It is happening in the context in which we are still sifting through the considerable emotional debris of the war that finished 20 years plus ago,” Mr. Feltham said.

Back in Travnik, students said they were exhausted by the burdens of a war they neither fought nor lived. They want to move on, “remove the metal fences and the obstacles erected in our own heads,” said Arsam Gasi, an ethnic Albanian, who attends the state side of school. He plays soccer with Croats and celebrates Ramadan with Muslims and Christmas, twice, with Christian Orthodox and Catholics.

“Nobody ever asks which side your family was on in that war,” Mr. Gasi said. “We can share the town; why can’t we be in the same school?”

The director of the state side of the school, Aida Loncar, has asked her Croatian counterparts on the right side of the building to tear down the metal fence dividing the schoolyard.

“We can replace it with flower pots,” Ms. Loncar said. “It’s still a barrier they want, but at least it’s alive, and like all living beings, it needs tending. We could work on it together.”

Ivana Curic, the director of the Catholic School Center, said the fence was needed to ensure the security of small children and because the two schools were “two entirely different institutions.”

“It does not look pretty, we are aware of that,” Ms. Curic said. “But it’s there, and that’s just that.”

During a recent visit to the school, students on the Croatian side of the yard were playing football. At some point, one kicked the ball over the fence to the students on a break from the state school.

A student there picked it up and threw it back over the fence. They both smiled, but said nothing.