Home Contact About
Home Instead of women’s history, there is a gap in Bosnia and Herzegovina 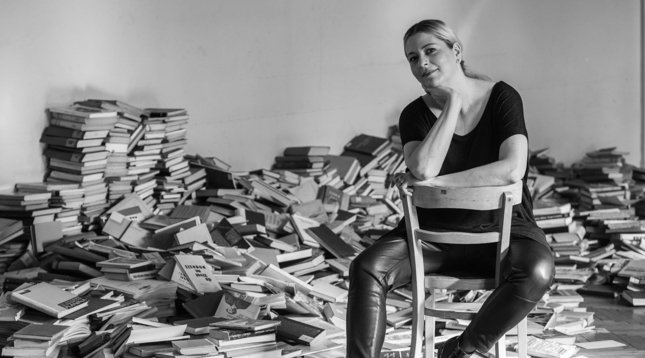 Instead of women’s history, there is a gap in Bosnia and Herzegovina

It is difficult to assess how many young women from Bosnia and Herzegovina are completing their doctoral studies at the most prestigious universities around the world, successfully defending their doctoral theses or doing post-doctoral studies, thereby specialising in a series of specific scientific fields, thanks to which their work will have a much more comprehensive meaning than mere meeting of form and potentially faster employment in the languid public sector of their home country. I know several of them and it is mostly only their wider families who know about their success. Their success is usually not discussed in our public space and we can meet them only during events of international organisations in Bosnia and Herzegovina.

I always recount my discussion with Borka Pavićević about the renowned Belgrade manager and one of the co-founders of Atelier 212, the director Mira Trailović. When they were preparing an exhibition about her rich professional life, Borka mentioned the numerous covers of Yugoslav newspapers that Mira Trailović adorned during her marvellous, multi-decade career, whether these were female magazines or ”serious” newspapers. When I asked her, how it came that we lost such front pages, why they were taken over by female entrepreneurs, Borka Pavićević said that the reason was the fact that we gradually lost the right to employment.

One of the ill-fated continuities that accompany women’s history in this and numerous other regions is the loss of the right to employment and continuously repeated fight for rights that had been obtained a long time ago.

Let me just remind you of the success of the female basketball player, Razija Mujanović, who is far above any man in Bosnia and Herzegovina in terms of the number of trophies she won. When she was about to enter the Hall of Fame, there was no representative of Bosnia and Herzegovina to support her in such a solemn moment and in a place that is accessible only to the chosen. On the other hand, every goal Džeko misses will be of a life-changing importance for us (without any wish to downplay the results of that man and football player). Razija Mujanović has been part of the professional representation team only since 2019, after the basketball players of Bosnia and Herzegovina reached the finals of the World Basketball Cup for the first time ever.

At the beginning of my work as a TV journalist, I was so lucky to work with Ismeta Dervoz. The former successful Yugoslavian music star was an equally successful TV producer, and some other skills became also obvious during her short, but fruitful political engagement. I remember the broadcasting of the opening of the reconstructed Old Bridge in Mostar as the most important post-war TV event and also the most important experience for all of us personally from the post-war period.

The team she managed, which also included me, was also supposed to prepare a live programme under the Old Bridge on the second day. The technical part is always carried out by men, and female camera operators are a thing of recent times. I watched her impart instructions to the numerous men in the team in a fluttery dress at an impossibly high temperature, under the typical glaring sun of Mostar. And nobody had any comments. Which does not really happen often in TV environment.

It is extremely important to see how much a woman can do and knows based on examples. Not to listen about some mythical women, and then see middle-aged or even older men who make decisions, whether they relate to the distribution of TV cameras or any other duties.

Since I am already mentioning the example of television, it should be pointed out that women are more present in media professions. Not only because of the fact that the system that acknowledges female entrepreneurs also insists on the promotion of attractive female TV presenters, but also because of the fact that this is an underpaid profession. One can find women in managerial positions at cultural institutions for the same reason. They act as saviours when nobody else wishes to deal with an institution that has been left in the lurch by the state, an institution with a leaking roof or no heating, which are conditions under which any programme-based activity becomes impossible.

Then they start resolving issues through careful spending, enthusiasm and dedication. ”Luckily”, in such a country it is impossible to regulate things completely, so that it cannot happen that once they clean up, some elderly man can claim the benefits. Women have been erased from our school curricula and literature, but also from other fields. They have been reduced to the level of a statistical error. Only few rise to the fore. Today, when Bosnian and Herzegovinian and South Slavic writers thoroughly dominate the literary scene thanks to works that, among other things, are a testimony to the authentic female experience and tackle fully marginalised topics, men are the exclusive decision makers when it comes to their publication and awards. And this might be one of the fields in which patriarchy has built the strongest walls, although it might seem differently, specifically due to the number of female authors and the quality of their works.

The last selection of new members of the Academy of Sciences and Arts of the Republic of Serbia included around thirty scholars, but there were no women among them. According to the opinion of Academy representatives, no women deserved to be put on the list of the thirty new members. In Croatia, there were ”even” two women among new members. I have no doubts that the Academy of Sciences and Arts of Bosnia and Herzegovina will follow the example of the neighbouring countries.

Women that have achieved and continue to achieve significant results first had to justify themselves for their ”courage” to depart from the established gender roles. Many of them first met the expectations of the society in order to even find the courage to dedicate themselves to their profession, eternally answering the question as to how they achieved the balance between motherhood and career. A question that has never been posed to any man.

They frequently had to apologise for their success, trying to temper the wrath caused by their successful breaking down of prejudices.

Results achieved by women have always been achieved in spite of everything, and not thanks to something. Although they are assessed based on the length of their skirt and the number of former partners. For this reason, we are immensely indebted with our female ancestors, and a way to reciprocate may also be the advocacy of the topic of marking the public space by women as a particularly important one, especially given the fact that, if we analyse the public space in Bosnia and Herzegovina, one might assume that women have never contributed to the building of this society. In case of Bosnia and Herzegovina, there is largely a gap instead of women’s history.

Due to the low awareness of the underrepresentation of women in our culture of memorialisation, a lexicon entitled ”100 Women – 100 Streets Named after Women” was compiled as a female activists’ answer to the disregard for the contributions women have made to the society of Bosnia and Herzegovina for the purpose of contributing to the study of women’s history in Bosnia and Herzegovina. It is part of the engagement in the framework of the initiative ”Peace with a Woman’s Face” launched by the organisation Forum Ziviler Friedensdienst e.V. (forum ZFD), the foundation ”Lara” Bijeljina and the association ”Horizonti” Tuzla. The lexicon about women that have pushed the limits in their communities in Bosnia and Herzegovina has been edited by Gorica Ivić, Jasmina Čaušević and Selma Hadžihalilović. Members of the initiative ”Peace with a Woman’s Face” will advocate naming of streets in Bosnia and Herzegovina after women whose biographies and achievements were compiled in the lexicon.

By way of illustration, out of 1081 streets in Sarajevo, only 16 were named after women. It is a city in which we also have streets such as Nova (new street) and Niže banje (lower baths) and probably there would be a huge uproar, if someone recommended to name one of these streets after Riki Levi or Nada Đurevska, who are two of 77 women presented in the lexicon. This number may be expanded up to hundred. And, as the authors state, it is supposed to be a symbol of the multitude that they strive to achieve, and not just a number.

The first argument against streets named after the two above named women or any other women would be a list of male priorities, great men that have left us and still do not have a street named after them, and another argument raised would also be the suitability from the perspective of their ethnicity, depending on the proposal and entity in which such a proposal is made.

The lexicon includes women that have given an immeasurable contribution to education, women that preserved anti-fascist traditions by joining the Anti-Fascist Front of Women and fought for a more equitable society, female artists, peacebuilders, women who were socially and politically active, female humanitarians and benefactors, irrespective of whether they spent their whole life in a distant place in which they were born or frequently changed their place of living, improving the place to which they went.

This book is also a testimony to experiences women had in order to obtain rights, such as the right to education in 1887, and their will and persistence is also a reminder for us that we should not give up on the path towards achieving our own wishes, whether they are personal or professional, and anything else that the patriarchal society deprived women of simply because of the fact that they are women.

You will hear about some women for the first time thanks to the lexicon, other women you may already have heard of, but what they have in common is their dedication, be it a case of sacrifying their own life to save the cultural heritage of Bosnia and Herzegovina, as in case of the librarian of the National Library, Aida Buturović, or dedicating it in an extraordinary manner to publishing and authors, as in case of Farah Tahirbegović.

Every story from the lexicon, although not long and adapted to research methodology, may be used as a film scenario. Whether it is Marija Bergman Kon, who, together with her sister, was the first girl that attended the grammar school in Mostar, and who later on obtained her doctoral diploma in Vienna, was an anti-fascist and survived the Holocaust, or Hiba Ramadanović, née Šerbić, who was the first Muslim girl to graduate in Tuzla, and then the first to enrol at the Faculty of Medicine in Belgrade, and she later on was the head of the first internal medicine clinic in Sarajevo.

Women’s experiences include obstacles the size of mountain ranges and success stories that are a testimony to the steadfast will to make it in a man-centered world. We owe it to the women of our past to also not accept patriarchal and capitalist imperatives according to which success is valued exclusively through money. If the most talented Yugoslavian female ballet dancer, Riki Levi, could be a ballet dancer at the beginning of the 20th century, when this was courageous and undesirable, then we can take more decisive steps forward or spread our wings in the 21st century.