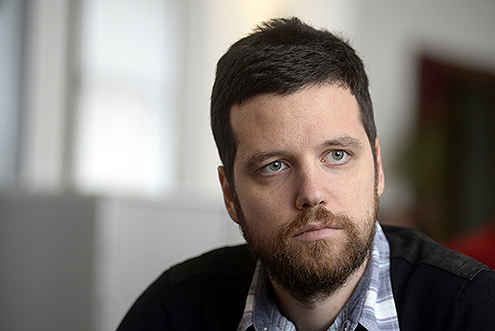 One of the most important struggles in ”games of power” is the struggle for meaning. Those who are in a position of power have managed to convince the people keeping them there with their consent that the world is the way the high and mighty see it. In our region, they frequently admit that the present is difficult, but that the future is bright and certain in many ways. It seems that the control over the meaning that is contributed to the present and the monopoly to the projection of future are the most important things for keeping the power. However, it is clear for everyone that a time reference is missing here – the one referring to the past. The struggle for meaning we attach to the past is actually a pre-requisite for the control over interpreting the present and projections of the future. Milan Kundera wrote that the only reason why persons wish to control the future is to be able to change the past. ”They are fighting for access to laboratories in which they will be able to ”retouch” photos and rewrite biographies and histories”, says Kundera.

The control over the meaning of the present was thus ensured by those who control the past. In the former Yugoslavia, those, who in the 1990s had ”retouched” the past regarding the fight against fascism in World War II, have installed themselves in positions of power after the dissolution of the country. All of a sudden, tchetniks, ustashas and other collaborators and fascists got out of control and started talking about the ”revenge against the Turks” or ”being ready for the homeland” and committing genocide and persecutions. It is therefore important to stress that the wars in the former Yugoslavia cannot be understood without understanding the power that narratives about the past confer on criminal policies. Today, there is a similar situation. The control over the past, including the near past of the 1990s, has become the basis and key legitimation and means of power in the present moment. The foundations of today’s republics contain ”retouched” photos, rewritten histories and biographies that have been washed with the hose of revisionism to eliminate lies and bloodstains.

However, what is the catch with facing the past from the 1990s? The catch lies specifically in the fact that it is only part of a more comprehensive mosaic of retouching the past, photos and biographies. This is the reason why facing the past from the 1990s cannot be successful, if we analyse the period separately from the more distant past. And the reason for this is not because it is important to go back to ”the seventh century” or ”Kulin ban” in order to understand anything about the present, but rather because of the fact that the criminal policies from the 1990s are directly related to the fact that pro-fascist actors turned into raving maniacs and that rewriting of more distant history takes place in order to motivate persons to commit crimes and to legitimize crimes from the recent history. The line that divided fascism and anti-fascism in the 1940s is the same line that became relevant in the 1990s and has remained relevant until today. This means that the initiatives for facing the past (from the 1990s) can be effective and fruitful only in the context of understanding the wider political and historical context in which the 1990s happened as well as narratives that turned out to be effective for the commission and later denial and justification of crimes.

More specifically, facing the past is possible almost exclusively from the perspective of anti-fascism, and in this region, there was only one such perspective – the perspective of partisans. The efforts of the civil society sector and the ideological centre that have lasted for decades have been ineffective, since they are trying to condemn the 1990s and relativise or fully deny the importance of the Yugoslavian experience and the national liberation fight. This, at the very least, leads to a logical paradox in which criminal policies from the 1990s are condemned, while at the same time there is a partial or full collision with anti-communist narratives that have been part of criminal policies of the 1990s.

Facing the past in the former Yugoslavia can thus be either common, partisan and therefore anti-fascist, or there may be no facing the past. The background for the international confrontation with criminal policies, primarily those from Serbia and Croatia, and then all others that found their legitimation in the aggression of these two main ”brutes”, must be based on the very same foundations of the national liberation army eighty years ago. Only such a background can ensure a fundamental confrontation with the bloody foundations of statehood of today’s republics, which is a pre-requisite for the confrontation with the crimes woven into the statehood of these republics. And there is certainly no shortcut for this.

And to be clear – this is not an invitation to ”go back”. This is an invitation to, just as Boris Buden wrote once, to go forward and remember. For this reason, invitations to ”look towards the future” and ”not look back” are a complete failure, since walking towards the future based on such a distorted past is nothing else but accepting the government of those that, by controlling the past ensured their positions in the future, too.

Sometimes one needs to stop, both in life and in politics, maybe in the same way as Emir Hodžić did in Prijedor, when he put on a white armband around his arm and stood on the square in order to draw attention to non-Serbs killed in that city. Maybe we truly have to say that there is no way forward until we all stop and look back. However, it is necessary to climb up to the shoulders of Sutjeska and Kozara mountains to be able to see the background of all war tragedies, such as Oluja, Srebrenica, Batajnica and Vukovar.

Filip Balunović received his PhD degree in Sociology and Political Science from Scuola Normale Superiore in Florence. He graduated from the Faculty of Political Sciences of Belgrade and received his master degree in International Relations and European Studies at the European Institute in Nice and University of Bilgi in Istanbul. He received a second master’s degree in Human Rights and Democracy at the University of Sarajevo and the University of Bologna. He worked at the University of Copenhagen and the University of Liverpool as a guest researcher. He is the author of the study entitled ”About the Phenomena of the Privatisation Process in Serbia” (Centre for Emancipation Policies 2015). He is also the author of the monography “Beleške sa slobode” (Mediteran 2014). He is the executive editor of Le Monde Diplomatique Serbia. He teaches at the Department for Policy Studies at the Faculty of Media and Communication. He is currently a researcher at the Centre for Advanced Studies – South East Europe at the University of Rijeka and the Institute of Philosophy and Social Theory in Belgrade.