Home Contact About
Home Memories As a Form of Wounds 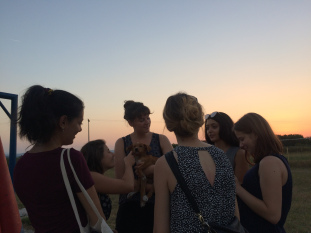 Memories As a Form of Wounds

As a local from the Prijedor region, I hear a lot of stories of how things were before the conflict of the 1990s, what happened during the war, and how things should be in the distant future. People rarely say what can be done today, tomorrow, and the day after tomorrow. We are caught in a never-ending circle of arguments and quarrels over sometimes unimportant things.

During the Project on Peacebuilding, there were many eye-opening moments. One important moment was when Sari Wastell said that trauma and memory are managed, but it is never in the public discourse in Bosnia and Herzegovina, especially in the Prijedor region. This is something that should have been discussed and managed a long time ago. Maybe our community would get the proper closure and will to move on.

By managing memory, we mean the process of learning how to cope with the memories emerging after a conflict, or an event that might have affected us in a negative way.

This is a component of peacebuilding often neglected but necessary in order for societies to get back to status quo ante bellum, or to further develop in a more positive direction different from the one before the conflict.

Memories are often associated with history, and—if it is true that history is said to be written by the victors—then our history will have a problem. Since there were no victors, only those who lost someone, lost something, or lost the battle, who will write our history and manage our memories?

We are still waiting for the answer, but this project made me believe it is possible to take today into our hands. We can build a future where we will not need to manage memories or trauma. A handful of evil people will not be able to kill a spirit as strong as the spirit of my compatriots.

** Project on Peacebuilding (POP) is a program run by Most Mira and the EU Studies Center at the City University of New York. The project focuses on the history, context, and changing politics of peacebuilding in Bosnia and Herzegovina. This is the fourth year of the project.