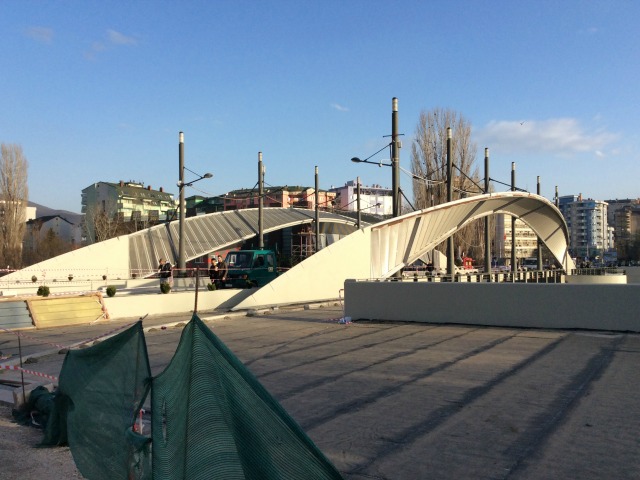 The bridge across the river dividing the Kosovo town of Mitrovica into ethnic Albanian and Serb areas is being reopened, but its history as a focus for tensions means locals are wary about expecting progress.

Since the war ended in Kosovo in 1999, the bridge over the river Ibar in the town of Mitrovica has become a symbol of the divisions between Albanians on the south side and Serbs on the north.

The newly-renovated bridge is due to be opened by EU foreign policy chief Federica Mogherini at a ceremony on Friday, but even the European-funded refurbishment project has been marred by disputes between the two sides.

The bridge is “a symbol that reminds us everyday about what happened in Mitrovica before, during and after the war”, Sanja Sovrlic, a local Serb journalist, told BIRN.

“From both sides of the river Ibar, we have people who lost a family member or a friend, we have people who left their houses [due to violence] and had to start life from the beginning. Because of these frustrations, there is a lot of mistrust between people from different communities,” Sovrlic explained.

The bridge’s role as a potential flashpoint was immediately highlighted just after the war when peacekeeping troops from NATO’s Kosovo force, KFOR, were deployed there in case of incidents in the town after Belgrade’s forces pulled out.

“The bridge was open only for one week. KFOR soldiers, under French command, were positioned on the bridge, where they started checking people,” another Mitrovica-based journalist, Musa Mustafa, who has been following the developments around the bridgesince 1999, told BIRN.

“From that moment on, it was clear that this part [of Mitrovica] was being divided,” added Mustafa.

Tensions between Albanians and Serbs continued, and the following year, on the night between February 3-4, a group of Serb vigilantes known as the ‘Bridge Watchers’ killed 10 Albanians in north Mitrovica, while around 12,000 more had to leave their houses in the southern part of the town.

Witnesses alleged that the February 2000 violence was incited by Oliver Ivanovic, a karate champion who became the de facto political leader of the local Serbs. But Ivanovic was cleared of the charges.

He was convicted of ordering the murder of ethnic Albanians in Mitrovica in April 1999 during the NATO bombing, when he was allegedly the leader of a paramilitary police unit, but that verdict was later quashed and he is now being retried.

Ivanovic’s arrest and trial caused yet more discontent in Mitrovica, where local Serbs took to the streets in angry protests.

In 2001, the French government paid some 1.5 million euros to rebuild the bridge. The contract’s terms stipulated that a multi-ethnic, Albanian and Serb construction team had to be hired to do the work.

“The question is how do you make people who fought each other work together? But they did. We had to rely on people of strong character, both Serb and Albanian, to get the work done. And we did it. We started it together and we finished it together. This has been much more than just a construction project,”he added.

Tensions erupted again in March 2004 when riots broke out after three Albanian children were reported to have been drowned in the Ibar river in Mitrovica after allegedly being attacked by Serbs, although they denied any involvement

The next day, thousands of Albanians staged protests on the south side of the river. KFOR peacekeepers blocked the bridge but gunmen opened fire and clashes broke out, with Albanian protesters attacking Serb properties.

The violence spread across Kosovo and 19 people – 11 Albanians and eight Serbs – died in the violent unrest. As well as assaults and killings, many Serbian Orthodox Churches were burned down.

“This was the worst time for Kosovo since the war was over,” said Mustafa.

After the unrest, which was later condemned by the Kosovo government as “one of the darkest episodes of our recent history”, the bridge was closed. People who needed to cross had to stop in a KFOR checkpoint to have their identities verified.

An Albanian local who never left his house in Serb-majority North Mitrovica told BIRN that Albanians who crossed the bridge were regularly assaulted by Serbs who waited on the northern side of the river.

“We were often been beaten up by the Serbs. And all this happened in view of the KFOR soldiers, only 20 metres from them, and they did not do anything to stop it,” said the man, who asked to remain anonymous.

There was a further outbreak of violence between Albanians and Serbs in 2011, three years after Kosovo declared independence.

In July 2011, Kosovo Police seized control of the two Kosovo-Serbia border crossings in the north, at Jarinje and Brnjak, causing anger in the local Serb community.

As tensions spiked, a police convoy was attacked and an officer called officerwas killed. Two of the Serb suspects in the killing were later acquitted.

Some 16 barricades manned by local Serbs were also erected in a protest against a decision by the Kosovo government to deploy customs staff on border crossings with Serbia.

The so-called ‘Bridge Watchers’builta large barricade made of stone and sand on the Ibar bridge, preventing the free flow of vehicles.

The barricade was finallydismantled on June 2014, but it was immediately replaced with a so-called Peace Park, made largely of conifers planted in concrete pots.

The Serbs’ new obstruction sparked renewed protests among Kosovo Albanians, some of which turned violent, with several people injured and numerous vehicles burned.

The so-called Peace Park was removed on August 2016, when the current renovation of the bridge began, after it was agreed as part of the EU-facilitated talks between Pristina and Belgrade aimed at normalizing relations.

The renovation is being funded by the EU at a cost of more than 1.2 million. Euros, and is intended to facilitate contact between people in the north and south of the town.

The bridge was intended to open to both pedestrians and vehicles by January 20, but this was postponed due to a new upsurge of tension after the local Serb authorities started building a two-metre-high concrete wall near the bridge.

Although the Serb authorities said it was a supporting wall for a riverside promenade, Pristina officials saw it as an attempt to prevent free movement and ordered building work to stop.

After a lengthy meeting between local Kosovo Serb leaders and Pristina officials which was intended to defuse the tensions caused by the dispute, the Serbs demolished the wall last month.

Now the renovated bridge is due to reopen on Friday at a ceremony attended by officials including Mogherini – another sign of the structure’s powerful symbolic status.

But some locals are pessimistic about the possibility of progress. “Mitrovica will be divided, at least for some more years. I hope it will get better,” Hamdi Sejdiu, a 70-year-old Albanian who was watching the work on the bridge, told BIRN.

“I hope that it will end up well, but I don’t think so. It can open now, but it only needs a very small problem to spark tensions again,” said Behxhet Mehmeti.

When the reconstruction work started on August 2016, both local Serbs and Albanians viewed it with optimism – as a sign that normal relations between the city’s residents could be restored.

But after the latest in a long series of disputes and mutual recriminations, they hope that one day the bridge will fulfill its primary function and no other – to enable people to move to and fro across the Ibar.

“In order that this bridge becomes a place to bring people together, there needs to be political will from both sides of the river,” said Sovrlic.

“And to build trust, we obviously need more time, because  in the last 18 years, we didn’t heal all the wounds.”