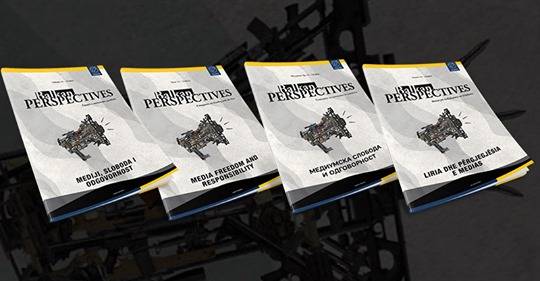 The transparency of institutions in Bitola is improving. Some even have spokespersons that hold press conferences, and most of the authorities answer reporters’ phone calls now. However, local journalists still struggle to obtain needed information quickly. As we are living in the age of electronic media, journalists should be able to obtain information quickly and, most importantly, official responses to media inquiries should be complete. In this respect, the institutions and journalists still have a lot of work to do.

This is the opinion of most journalists from Bitola, a town in the south of the Republic of North Macedonia, which is considered one of the most important strongholds of journalism in the country. Despite difficult times for the media in this country, one television station, one radio station, five newspapers, three online portals and seven individual correspondents still operate out of Bitola. In the past, Bitola had more than 250 media workers, and currently has around fifty.

“For us, it is important to make institutional authorities, regardless of their political affiliations, understand that journalists should not be used as tools for achieving political ends or manipulation. Journalists “should be open, transparent and accountable”, said Aneta Blazhevska, who has been working as a journalist for 22 years.

Five experienced journalists from Bitola who have each worked in journalism for more than two decades revealed through interviews conducted for this article that they perceive the government institutions led by the SDSM party (in the past three years) to be more transparent than those that were operating under the VMRO-DPMNE party government (2006-2016). But, there is still work to be done.

“I don’t know if there have been other examples of this in our municipality or surrounding area in the 21st century, but under the previous local government in Bitola, when Vladimir Taleski was Mayor, I was not invited to a single press conference in the municipality nor to any of his other activities. I suppose it was because I had previously asked the Mayor difficult questions, which he had directly dismissed, and because I then questioned this behaviour, he responded with awkward remarks”, said Emilia Misirlievska, journalist and correspondent for TV Telma.

Blazhevska’s experience with the previous local government is similar. “I was excluded from all municipal events for more than three years, due to my objective and critical approach to issues and events”, she said. With respect to the current government, she adds that, despite communicating with certain spokespersons, she sometimes does not get an answer to her question for weeks or months on end. “They do not respond, because it does not benefit them”, she added. Stevche Mitrevski, a long-time correspondent for MTV regards the public enterprise “Niskogradba” (Civil Engineering) from the previous government as a classic example of the lack of transparency. The responsible authorities of this public enterprise avoided answering questions about their operations, even though they are financed by the taxpayers. Martin Nikolovski from Bitola, a journalism student in Ankara, Turkey who has already worked for several media outlets in North Macedonia, asked the Agency for Audio and Audiovisual Services several years ago for public information and did not receive a reply. This year, he received a reply to his request for information after two days.

TV “Tera” received responses from all the current government institutions that they contacted. But, Stevo Bashurovski, the editor and an experienced journalist, says that the comprehensiveness of these responses is a different issue.

“The current government is trying to improve its transparency. The question that remains is to what extent the information acquired will be used at a time when media outlets are mostly concerned with the amount of pistachios someone ate at the state’s expense and turning these stories into soap operas. The media’s ability to obtain answers is improving, but the public impression is that the media is focused on exposing petty political tricks rather than on substantive reporting”, said Bashurovski.

All governments react in the same way to awkward questions – awkwardly

Regardless of the political party they come from, politicians tend to react to awkward questions in the same way – awkwardly. Some are more restrained, while others are more explosive. Blazhevska says that “they are either angry or respond with arrogance”. Misirlievska says that all officials take awkward questions personally, and Mitrevski finds that “if they do not react instantly, they instead make sure to learn what media outlet the journalist is affiliated with after the event is over”, while Bashurovski states that “if something does not go in their favour, they try to draw water to their own mill (twist it to their own advantage)”. With a slightly different take on the situation, Nikolovski says that journalists can indeed be a nightmare for holders of public office; however, unlike in the past when journalists were publicly downgraded for asking awkward questions, today’s officials tend to answer questions from the media.

Journalists from Bitola find it more difficult to receive information from the public institutions based in Skopje than their colleagues who work in the capital. Over thirty public institutions operate in Bitola, some are municipal and some fall under the responsibility of the ministries. Only six have spokespersons. Decentralization processes have been implemented for years, but public institutions are still centralized. When journalists ask for information, they are directed to central institutions in Skopje. Of the 16 ministries, only the Macedonian Information Agency (MIA) has published the names and contact information of (17) spokespersons on their website. In most ministries, the Departments of Public Relations have appointed persons who are not spokespersons to fill the role of information officer. They publish landline phone numbers and email addresses, but now-a-days landline phones are rarely answered, making communication difficult.

Out of the thirty institutions in Bitola, only six have spokespersons

Communication is easy with the Municipality of Bitola, the Mining and Energy Combine, the Sector of Interior, the University “St. Kliment Ohridski”, the Clinical Hospital “Dr. Trifun Panovski”, and the Culture Centre, as these Bitola-based institutions all have spokespersons. Representatives from these institutions stated during interviews that their main commitment is not to silence the truth.

“The truth is the only way to face reality. I never suppress information”, said Metodija Kunovski. He is the spokesperson for the Mining and Energy Combine “Bitola”, where for many years, unlike now, the communication was quite centralized. The spokesperson for the Municipality of Bitola, Emilia Sarafska, said that there is no escaping awkward questions. “Sharing certain information may not always be in the interest of the institution. Nevertheless, transparency and truthfulness…is better than a lie”, says Sarafska.

The spokespersons have set working hours, but the journalists work all hours, still they try to respond to inquiries as soon as possible.

“The Ministry of Interior (MOI) always sends a response, regardless of whether the questions have been asked via telephone, e-mail, Facebook and Viber. [The MOI responds] immediately, on the same day, in the shortest time possible, if the request does not require statistical data, which cannot be instantly provided. However, we try to answer even those requests in a few hours or the next day, at the latest”, says Sanja Stamatova, spokesperson for the MOI.

The spokespersons say that there is a lot of misinformation and spin these days. Kunovski explains that public interest in the Mining and Energy Combine “Bitola” has always been high, but that different or shifting political interests cannot and should not dictate media narratives. Sarafska says that there have been cases where journalists asked for an explanation or interpretation and then used her quote out of context (sometimes as the title of an article that alluded to a different issue). In some cases, she told journalists from Skopje that the Mayor of Bitola was not available to see them within the following 48 hours; they nonetheless stood up to publicly criticize the Mayor for not making time to meet them.

Journalists and spokespersons do admit that they have a common goal – the accurate and verified sharing of information with the public. For this reason, they cooperate professionally. However, in some cases, they also spend their leisure time together and socialize. According to the spokespersons, they each started out as journalists and know that a reporter’s bread is hard to earn.

Zhaneta Zdravkovska, from Bitola, has worked in journalism for twenty years. She began her career as a reporter at the local television stations “Orbis” and “Medi” and has since worked as a correspondent for the national newspapers “Dnevnik”, “Vest”, and “Utrinski Vesnik” and for “Radio Free Europe”. She currently works as a journalist for the local portal Apla.mk and as a contributor to the national portal Sakamdakazham.mk. She is the coordinator of the Association of Journalists of Bitola and Prilep and the winner of several journalism awards.