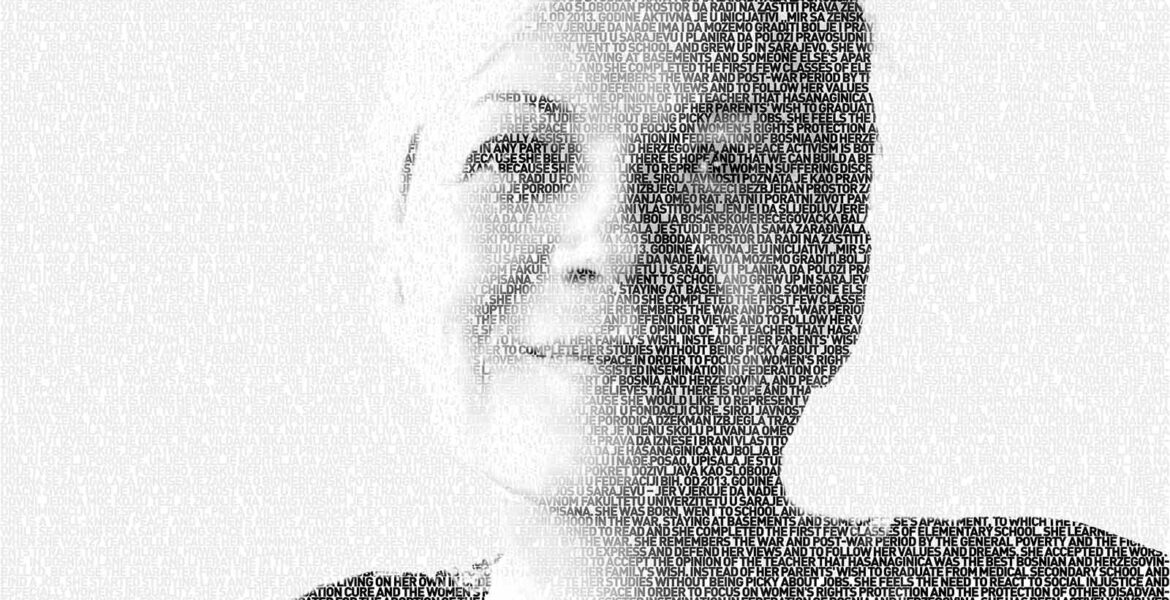 She was born, went to school and grew up in Sarajevo. She works as a lawyer at the Foundation CURE. She is a well-known peace and women’s rights activist.

She spent her early childhood in the war, staying at basements and someone else’s apartment, to which the family Džekman fled while searching for a safe living space in the city under siege. In the basement, she learned to read and she completed the first few classes of elementary school. She learned to swim only when she was 27 years old, because her swimming school classes were interrupted by the war. She remembers the war and post-war period by the general poverty and the fight of her parents to raise three children. However, Vildana never gave up on two things: the right to express and defend her views and to follow her values and dreams. She accepted the worst grade, one, in Bosnian language and literature in the elementary school, because she refused to accept the opinion of the teacher that Hasanaginica was the best Bosnian and Herzegovinian ballad, because the character from the ballad was subordinated and forced to marry at her family’s wish. Instead of her parents’ wish to graduate from medical secondary school and find a job, she started studying law and she earned a living on her own in order to complete her studies without being picky about jobs. She feels the need to react to social injustice and especially women’s inequality. She saw the Foundation CURE and the women’s movement as free space in order to focus on women’s rights protection and the protection of other disadvantaged persons’ rights. For seven years, she advocated for the adoption of the Law on Medically Assisted Insemination in Federation of Bosnia and Herzegovina. She has been actively involved in the initiative “Peace with Women’s Face” since 2013. She travels and she feels well in any part of Bosnia and Herzegovina, and peace activism is both her mission and way of life. Although she has the opportunity to go abroad and work there, Vildana is still in Sarajevo – because she believes that there is hope and that we can build a better and fairer society.

The only power she aims at is knowledge. She is doing her MA studies and is planning to pass the bar exam, because she would like to represent women suffering discrimination and disempowerment. The story about Vildana Džekman is about to be written.

“Knowledge is power, knowledge is our strength! We have to learn in order for all of us to be able to bring about change!”

“A small candle, a shell and a lip-stick. A small candle – because a candle reminds me of the war. Also, I like to meditate and do yoga, and a candle is important, because it makes me relax. A shell because I love the sea. There is also this connection to the war and the end of childhood. I started swimming when I was 27. It was on the seaside in Korčula. I love the sea, because it helps me make some important decisions. So, the shell re-minds me of the sea. And lipstick is my revolution. I am an activist and I never go to the media or protests or revolutions, unless I put on red lipstick first. This is my resistance against the patriarchy, male dominance and fight against all forms of oppression and violence against women. It is a way to gain additional strength.”