Home Contact About
Home What the Karadzic verdict means for Bosnia 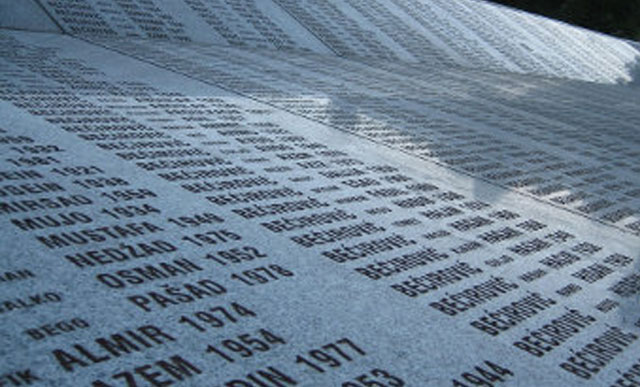 What the Karadzic verdict means for Bosnia

Following a lengthy trial, the former Bosnian Serb leader Radovan Karadzic has been found guilty on one count of genocide as well as numerous crimes against humanity in the International Criminal Tribunal for the former Yugoslavia in The Hague. Denisa Kostovicova assesses what the verdict means for Bosnia, writing that although the outcome of the trial is highly symbolic for the victims of the Bosnian war, the country remains deeply divided.

The Karadzic verdict: How the trial played out and what it means for Bosnia

The guilty verdict handed down to Bosnian Serb leader Radovan Karadzic marks a landmark moment in the 23 year-long history of the International Criminal Tribunal for the former Yugoslavia in The Hague (ICTY). Karadzic is the highest-ranking official to be tried and sentenced for genocide, war crimes and crimes against humanity committed in Bosnia’s war from 1992-5, and, in fact, anywhere else on the territory of former Yugoslavia. Karadzic’s guilty verdict will, therefore, go some way towards meeting justice.

The 11 counts on which Karadzic was indicted (of which two were for genocide) summarise the horrific record of death and destruction of Bosnia’s war up and down the country, when Bosnian Serbs under Karadzic’s leadership set out to establish an ethnically-homogeneous statelet from the multi-ethnic Bosnia. The campaign resulted in some of the worst violence on European soil since World War Two, including the killing of some 8,000 Muslim men and boys in Srebrenica, and a three year-long siege of the capital Sarajevo.

The trial itself was of historic proportions. It incorporated 497 days, and heard hundreds of witness testimonies. Tens of thousands of exhibits and pages of written evidence were presented, and considered by the judges. The process has invoked comparisons by many pundits with the trials in Nuremberg. But twenty years after the end of Bosnia’s war, the verdict’s impact on reconciliation in this post-conflict country will be limited by the enduring consequences of death and destruction that Karadzic oversaw.

What will the verdict change?

The mere fact that Karadzic has come to hear his verdict is enormously significant. The Karadzic trial came after the 2006 death of Slobodan Milosevic, the mastermind of the Greater Serbia policy and the wars of Yugoslavia’s violent dissolution, who was also charged with genocide but died while in ICTY custody. With his death, Milosevic eluded justice, leaving a general sense of betrayal among the victims throughout former Yugoslavia, including Bosnia.

The Karadzic verdict, although long delayed, is therefore critical for the victims and survivors of violence in Bosnia, many of whom had summoned the courage to face him in court. But the sentencing of a high-ranking official like Karadzic is not so much a question of setting a legal precedent (though such precedents are key for the development of international law): dozens of trials and verdicts for lower-ranking perpetrators of Bosnia’s violence have already been passed by the ICTY, which has proved ground-breaking in terms of emerging global norms of accountability for violence in contemporary conflicts.

Nonetheless, the symbolic importance of the verdict is momentous. The verdict establishes a direct link between Karadzic’s deadly rhetoric and death and destruction in war time, precisely as the victims saw and understood it in the midst of the conflict. The confirmation now comes as a measure of justice, and, most importantly, before it is too late. Those who were middle-aged during the war are now frail elderly men and women, many of whom feared that they would fail to see either truth or justice in their lives, which have been marked indelibly by the violence unleashed by Karadzic. Many older survivors have not lived to see the moment.

And this moment took a long time to come. In the early 2000s it was by no means certain that it would ever reach this point. After his indictment in 1995, Karadzic eluded justice effectively, hiding for thirteen years, only to be apprehended as a new age healer in Serbia’s capital, Belgrade, as Serbia faced a choice between apprehending those fugitives summoned by The Hague or pursuing the country’s new future in the European Union.

However, while some satisfaction at justice being done will no doubt emerge when Muslim and Croat victims see the images coming from the ICTY today, this feeling will be marred in the days to come by the inevitable politicisation and contestation of the verdict.

What won’t the verdict change?

‘The Bosnian Serb leadership’s policy of genocide was an utmost success’, a survivor of Srebrenica genocide, who himself lost 17 members of his family, told me on my recent research visit to Bosnia. Bosnian Muslims have been ethnically cleansed from their homes. The effect of violence has been transgenerational, he explained, recalling the names of killed relatives that will not be passed on. Just over twenty years after the war, Bosnia remains a divided country, politically, culturally, and geographically. These divisions have informed ethnic groups’ perceptions of justice, and especially justice coming from the ICTY.

In the run up to the verdict, conflicting ethnic perspectives were on display. Muslim and Croat victims who see Karadzic as the mastermind of the war were awaiting the verdict, and long-sought justice. The country’s Serbs, many of whom consider Karadzic their national hero, had pre-emptively contested a guilty verdict, as well as the legitimacy of the international court, which they see as an anti-Serb instrument. The initial reactions to the guilty verdict conform to the same pattern.

Paradoxically, such reactions also point to another perverse achievement by Karadzic and his policy: namely his successful efforts to present himself as an embodiment of the nation and to collectivise the issue of guilt and responsibility. It is not him, but the Serbian people, who is accused, he said at the end of the trial. This collective logic lies behind the contestation both of Karadzic’s verdict, and of the ICTY.

Dissenting voices among Serbs in Bosnia who condemn Karadzic’s war time policy have been heard loud and clear. But as minority voices they only confirm that the tribunal will have limited success in individualising criminal culpability, which is crucial if a path for reconciliation is to be found in Bosnia as well as in the Balkan region as a whole.

Ultimately, the verdict also points to a limitation in the use of trials as an instrument to achieve justice in post-conflict settings. Verdicts such as the one handed down today are key in opening up a space, however contested, to face the criminal past, but the search for justice must continue on the ground, in schools and communities, which are obliged to tackle difficult questions so as to repair broken relations and bridge divisions.

Note: This article gives the views of the author, and not the position of EUROPP – European Politics and Policy, nor of the London School of Economics. It was posted on EUROPP, 24. March 2016

Denisa Kostovicova – London School of Economics and Political Science
Denisa Kostovicova is Associate Professor in Global Politics in the Department of Government and a Research Fellow at the Civil Society and Human Security Research Unit in the Department of International Development at the London School of Economics and Political Science. She received Leverhulme Research Fellowship in 2015 to study a regional approach to transitional justice in the Balkans. Her research interests include nationalism and democratisation in the global age, post-conflict reconstruction and security, civil society and human security, war crimes and transitional justice and European integration of Western Balkans.