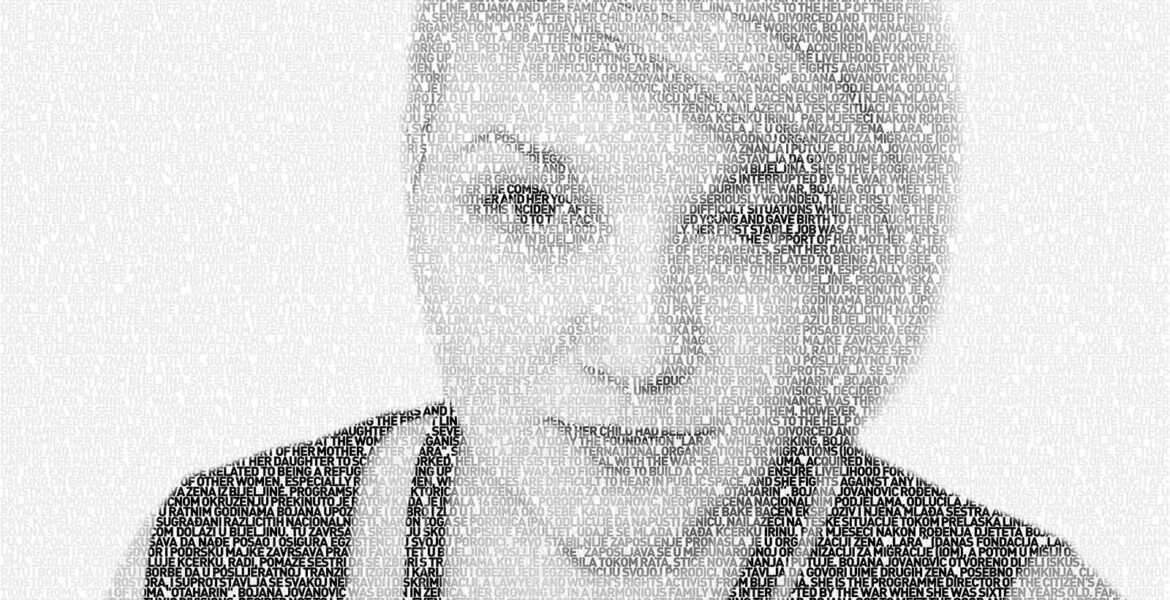 A lawyer and women’s rights activist from Bijeljina. She is the programme director of the citizen’s association for the education of Roma “Otaharin”.

Bojana Jovanović was born in Zenica. Her growing up in a harmonious family was interrupted by the war when she was sixteen years old. Family Jovanović, unburdened by ethnic divisions, decided not to leave Zenica, even after the combat operations had started. During the war, Bojana got to meet the good and the evil in people around her. When an explosive ordnance was thrown on the house of her grandmother and her younger sister Ana was seriously wounded, their first neighbours and fellow citizens of different ethnic origin helped them. However, the family decided to leave Zenica after this incident. After having faced difficult situations while crossing the front line, Bojana and her family arrived to Bijeljina thanks to the help of their friends. She graduated there, enrolled to the faculty, got married young and gave birth to her daughter Irina. Several months after her child had been born, Bojana divorced and tried finding a job as a single mother and ensure livelihood for her family. Her first stable job was at the women’s organisation “Lara” (today the foundation “Lara”). While working, Bojana managed to graduate from the Faculty of Law in Bijeljina at the urging and with the support of her mother. After “Lara”, she got a job at the International Organisation for Migrations (IOM), and later on at the OSCE Mission. During all that time, she took care of her parents, sent her daughter to school, worked, helped her sister to deal with the war-related trauma, acquired new knowledge and travelled.

Bojana Jovanović is openly sharing her experience related to being a refugee, growing up during the war and fighting to build a career and ensure livelihood for her family in the post-war transition. She continues talking on behalf of other women, especially Roma women, whose voices are difficult to hear in public space, and she fights against any injustice and discrimination.

“This spoon is my link with the old me. My relation to what I had been up to 1992. It was taken out from the burnt remains of our family home. It is actually one of the rare things that remained. In the early morning of October 21, 1992, we got a call from my mother’s cous-in, who informed us that the house had burned down. Given the fact that it was already cold, my mom thought that the grandmother had heated the house, that a spark prob-ably came out and set the house on fire. The cousin said that my sis-ter was at the hospital. We pan-icked and went to the hospital. We found her there in a coma, with extremely serious burns over her whole body and face. She was 11 back then. The in-juries were terrible even to look at. This is when we found out that dynamite in sticks was thrown in the attic of the house and that the house exploded. Luckily, the grand-mother managed to get her out from un-der the debris. The house had been built in 1938 using large and extremely heavy stone blocks. The grandmother managed to get my sister out, to somehow get her down through the mezzanine and she herself managed to jump from above. After that moment, our first visit to the hospital, my father went to the burnt remains of our home and dug there. It was actually his way to fight, to do something physical in order to survive the moment and what had happened to us. He managed to dig out this spoon from the site of fire and several other items, which we threw away in the end, but I kept the spoon. The spoon has been following me for around 26 years, and when I am in my home, I cannot eat with any other spoon, but this one…”