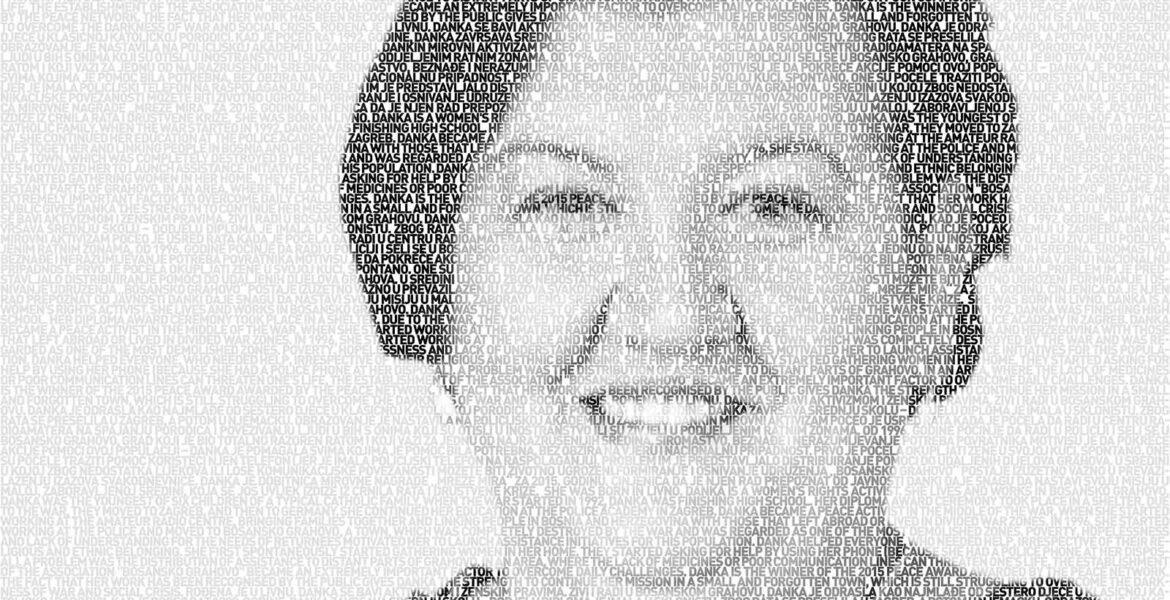 She was born in Livno.  Danka is a women’s rights activist. She lives and works in Bosansko Grahovo.

Danka was the youngest of six children of a typical Catholic family. When the war started in 1992, was finishing high school. Her diploma award ceremony took place in a shelter. Due to the war, they moved to Zagreb, and then to Germany. She continued her education at the Police Academy in Zagreb. became a peace activist in the middle of the war, when she started working at the amateur radio centre, bringing families together and linking people in Bosnia and Herzegovina with those that left abroad or lived in divided war zones. In 1996, she started working at the police and moved to Bosansko Grahovo, a town, which was completely destroyed by the war and was regarded as one of the most demolished zones. Poverty, hopelessness and lack of understanding for the needs of returnees motivated her to launch assistance initiatives for this population. helped everyone, who needed help irrespective of their religious and ethnic belonging. She first spontaneously started gathering women in her home. They started asking for help by using her phone (because she had a police phone at her disposal). A problem was the distribution of assistance to distant parts of Grahovo. In an area, where the lack of medicines or poor communication lines can threaten one’s life, the establishment of the association “Bosansko Grahovo” became an extremely important factor to overcome daily challenges.

Danka is the winner of the 2015 Peace Award awarded by the Peace Network. The fact that her work has been recognised by the public gives the strength to continue her mission in a small and forgotten town, which is still struggling to overcome the darkness of war and social crisis.

“One has to find inspiration somewhere in oneself to see this world and to understand it in a realistic manner. One will not be young forever, but while a person is young, they can do much more than once they become older. And once you become older, you will be sorry. One should be both a volunteer and an activist. There is a wide range of activities that one can participate in – to help people, to help one’s neighbours, without paying attention to their ethnic origin (believe me, this has to be a secondary issue). Help other people in any way you can, make their life easier. You will feel fulfilled. This will motivate you and give you energy. You were asking whether I have a moto? I do: Let us go continue!”

“This camera has always been with me, since the very beginning of my engagement, since the arrival to Bosansko Grahovo. It belonged to my brother, he had bought it a long time ago. It is a vintage camera. One has to put film in it and then develop the negatives. There are no longer such cameras, nobody is doing it anymore. However, I am still doing it. Photography means a lot to me as a topic, as a thing. Back then I took pictures of things that maybe no-body else did. And maybe even stranger, the camera was always in the car, in my bag. I took pictures of the arrival to Bosansko Grahovo, I took pictures of people returning home. I wanted to record and show the emotions that people expressed back then. Nobody believed in the survival. People needed to get back the hope. When one returns home as a refugee and sees that there is nothing left, that one no longer has anything. I saw these emotions, I recorded them. And now, after so many years, I am sharing them with the people, giving them back hope and saying: You see, you have survived! It was difficult, but you made it! You rebuilt your home, got back your family, and somehow there is a happy end!”