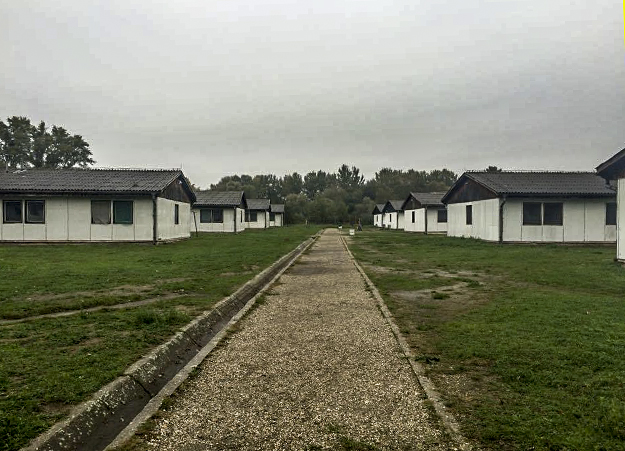 At the beginning of 2015, I read a story on Balkan Insight about 170 Serbs, 90 from Kosovo, who were welcoming in another New Year at Krnjača, the last remaining collective centre for refugees in Serbia’s capital. During the wars in the former Yugoslavia, many ethnic Serbs fled from their homes in Croatia, Bosnia and Herzegovina, and Kosovo.

In 1999, over 200,000 Serb civilians fled Kosovo and travelled north as NATO peacekeeping troops entered the country, according to UNHCR data. I observed limited reporting on the precarious status of the potentially hundreds of displaced Serbs, forgotten by both Serbia and Kosovo.

In September 2015, I found myself in the collective centre in Belgrade, considered Serbia’s worst refugee camp, documenting the living conditions of more than 150 Serbs. Over 80 of them had been displaced from Kosovo. Built in the 1990s to shelter Serbs who had become refugees overnight, the camp’s desperate conditions were attributed to how quickly its simple barracks had been built.

The shocking sight before me, and the conversations I had with the despairing residents living at this collective centre, influenced me in a way I had never experienced before. I questioned my own understanding of how journalists document life after the war in the territories of the former Yugoslavia and how much I actually knew about the range of experiences people faced during the Kosovo war.

Were the Serbs of Krnjača not also victims of the Milošević regime? In his attempts to create a Greater Serbia for all Serbs, the notorious Serb politician transformed the region into the bloodiest theatre of war that Europe has seen since World War Two. When Serbian forces retreated, ending their campaign of ethnic cleansing and war crimes in Kosovo, many Serb civilians also left for fear of retaliation by Kosovo Albanians. Was their fear not justified considering the persecution that took place and the murders committed after the war ended?

The article that I wrote on Krnjača, in 2015, was the second one through which I had explored the subject of dealing with the past. The first I wrote a few months earlier, on missing persons from Kosovo who had been taken by Serbian forces and the anguish felt by their families as they continued to wait for information about their loved ones.

Over the last four years, I have reported more frequently on transitional justice issues in Kosovo, writing articles about survivors of wartime sexual violence, survivors of wartime mass killings, people whose lives have changed dramatically, survivors who struggle to overcome the trauma they experienced and the resulting anxiety they feel today, and those who will not stop seeking justice.

It has taken me some time to understand the complexities of transitional justice and the mechanisms that are in place to address mass human rights abuses. Regardless of the specialization of the journalist or their knowledge of the correct terminology, it is extremely important for journalists reporting on these cases to be ‘on the ground’, to observe, to speak with people, and to attempt to understand the different experiences and needs of those who have suffered and continue to suffer from the ramifications of war.

When it comes to missing persons, the media in Kosovo is rarely so brave as to report on the 400 people from Serb and minority communities who are amongst the 1,600 still missing from the war.

Across the region, the media continues to demonstrate bias via its reporting of events, the voices it selects to cite and publicize, and which sides of the story it tells. The voices and experiences of minority groups are almost completely omitted. Journalists have largely failed to distance themselves from their own community’s collective memory and the dominant narratives associated with the ethnic group to which they belong.

The mainstream media tends to focus on reconstructing and republicizing trauma, which can further victimize and (re)traumatize survivors. Massacres, mass graves, and deportations that occurred during the war may be common knowledge, but the media rarely shares adequate or objective information about how the justice systems of Kosovo or Serbia treat victims, how legislatures have failed certain groups, or how, 19 years after the war, the survivors of rape still do not have access to free, confidential, and safe health care.

Journalists are supposed to seek the truth. It is in the public interest that we establish the truth about all human rights violations and incorporate these truths into our greater collective memory. The story must go beyond documentation, whether we are reporting on rape, loss of life, or missing persons. Consideration of life after war, which includes the progress and failures of war crime trials, the punishment of perpetrators, reparations for victims, and support given (or not) by the state, should accompany any comprehensive journalistic investigation into crimes which took place during wartime.

True dedication to accurate documentation often leads journalists from one story to another. Reporting on transitional justice in Kosovo and the region comes with an intellectual responsibility to provide readers with new stories and perspectives, rather than stories which merely reproduce dominant, one-sided narratives. Responsible, ethical journalists must be prepared to dig for and expose the truth, even when the truth conflicts with dominant wartime narratives or collective memory.

Dafina Halili is an award-winning journalist based in Prishtina, Kosovo. She works as a journalist and contributing editor at Kosovo 2.0, an independent media platform, covering mainly human rights and social justice issues. Halili has a Master’s degree in Diversity and the Media from the University of Westminster in London, U.K.