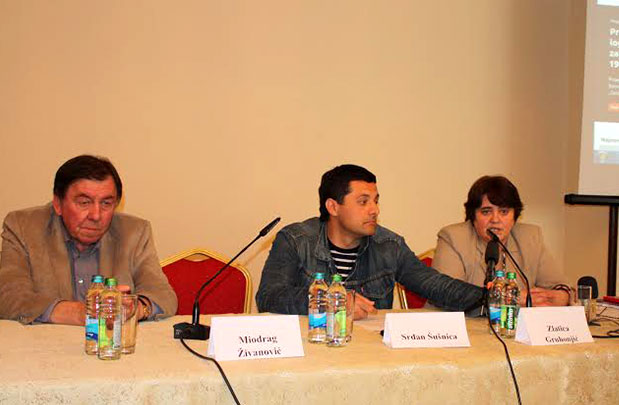 The project entitled ”Documenting Detention Camps and Other Detention Facilities in Bosnia and Herzegovina in the Period 1992-1995” was presented yesterday, on April 17, 2015, in Banja Luka. This project is jointly implemented by the Centre for Democracy and Transitional Justice (CDTP) from Banja Luka and the association Transitional Justice, Responsibility and Remembrance (TPOS) from Sarajevo.

The president of the association and a project researcher, Zlatica Gruhonjić, emphasized that the ”primary goal of the project is to establish a register of all detention facilities, describe the facilities and conditions under which war prisoners and civilians were detained, create a list of killed persons and victims of torture and establish the most complete register of all detention camp detainees and other detainees. In the period from July 2013 to the end of 2014, CDTP and TPOS documented 165 detention camps and detention facilities by creating profiles or fact narratives on detention camps and detention facilities. The researchers of CDTP and TPOS obtained the facts stated in the profiles by using data from several independent sources, such as court rulings, court evidence that constitutes the basis of the court rulings, witness testimonials of the Hague Tribunal, domestic courts in Bosnia and Herzegovina and courts of the countries in the region, and statements of former detainees provided to CDTP and TPOS. In addition, 64 books, publications, 221 media texts, reports of NGOs monitoring war crimes trials, forensic reports, photographs, maps and other sources were used.”

Miodrag Živanović, a professor at the Faculty of Philosophy of Banja Luka, also addressed the audience. He stressed the importance of the research for the purpose of fact and truth finding about the past, because, according to the words of professor Živanović, ”we have five dominant truths in Bosnia and Herzegovina today: every of our ethno-political elites have their own truths, and these are three truths, the fourth truth is the truth of refugees and displaced persons and the fifth truth is the truth of the international community. For this specific reason, every piece of research dealing with fact finding makes sense, since it contributes to truth finding. The closer we get to the truth, the closer we get to trust, and thus also reconciliation.”

The publicist and cultural expert, Srđan Šušnica, stressed that ”the task of creating profiles of detention camps and other detention facilities, just as the issue of war crimes, killed and missing persons, actually constitutes scientific and investigative archiving of our memories, as a result of which is its objectivisation.

Both the domestic and foreign public has the right to know factographic data on crimes. Such projects objectivise the truth, which is one and only. Certain political forces in the society, which I would call jailers, manipulators and masters of our memories, refuse to hear the truth.

Their goal is not to objectivise the truth and fully disclose the truth about the true dimensions of war crimes, since such truth would constitute a basis for a catharsis, which everyone in Bosnia and Herzegovina needs.

For this reason, this and similar projects of the NGO sector, just as any true effort of official institutions, individuals and organisations, is a commendable step in truth finding – the one and only truth.” The website of CDTP (www.cdtp.org), which contains all detention camps and detention facilities processed so far, was presented during the conference.