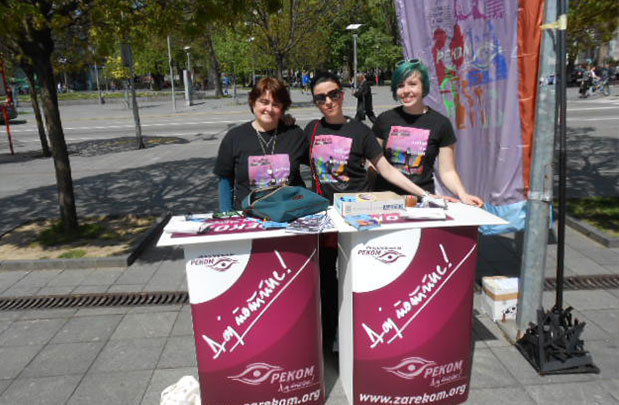 An action for expressing support to the establishment of the RECOM initiative was held in Banja Luka.

The association Centre for Democracy and Transitional Justice organised another action aiming at providing support to the establishment of the RECOM initiative. RECOM is a civic initiative inviting the former Yugoslav countries to jointly establish a Regional Fact Finding Commission for war crimes and other grave violations of human rights committed on the territory of former Yugoslavia. The action was held on April 25, 2015 in the square Trg Krajine in Banja Luka.

The employees of CDTP, together with a group of volunteers and activists from Banja Luka, participated in the action.

They gathered 67 signatures supporting the establishment of RECOM and distributed 85 bulletins of the RECOM initiative and 125 leaflets. CDTP thus continued promoting the RECOM initiative and disseminating public support started through the international RECOM project, which is the only means that can eliminate limitations and deficiencies of trials, ensure fact finding on all war crimes and lead to public acknowledgement of all victims as a pre-requisite for peace building, trust and non-repetition of crimes. War crimes and victims may not be forgotten.

Through the action ‘I support RECOM’ we are expressing our respect for all victims and responsibility for a future devoid of crime.