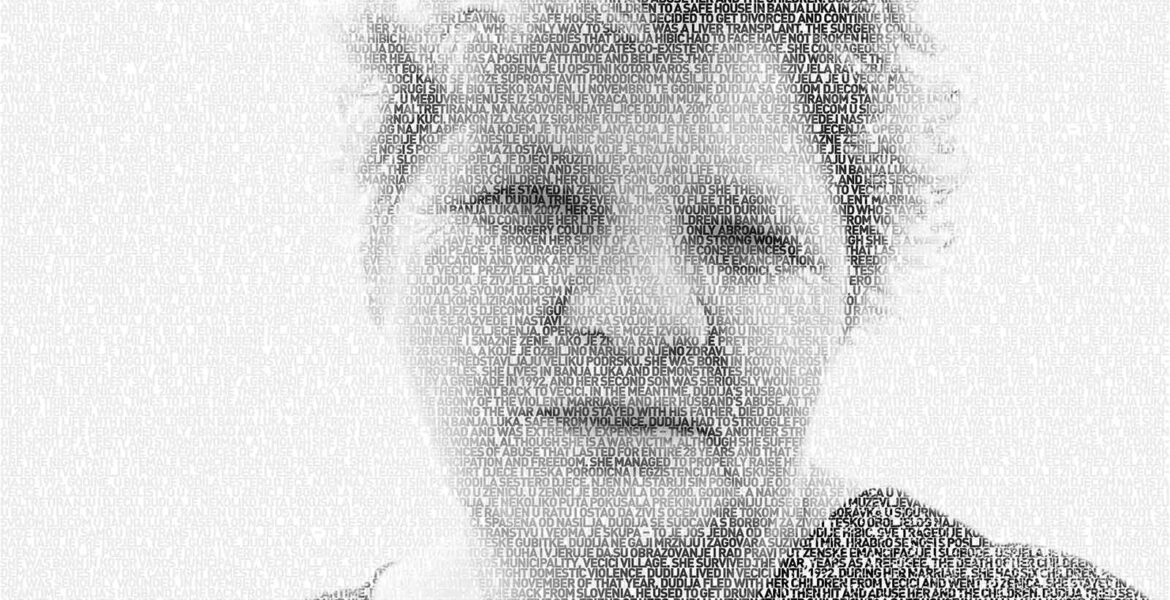 She was born in Kotor Varoš municipality, Večići village. She survived the war, years as a refugee, the death of her children and serious family and life troubles. She lives in Banja Luka and demonstrates how one can fight domestic violence.

Dudija lived in Večići until 1992. During her marriage, she had six children. Her oldest son got killed by a grenade in 1992, and her second son was seriously wounded. In November of that year, Dudija fled with her children from Večići and went to Zenica. She stayed in Zenica until 2000 and she then went back to Večići. In the meantime, Dudija’s husband came back from Slovenia. He used to get drunk and then hit and abuse her and the children. Dudija tried several times to flee the agony of the violent marriage and her husband’s abuse. At the initiative of a friend of hers, Dudija went with her children to a safe house in Banja Luka in 2007. Her son, who was wounded during the war and who stayed with his father, died during her stay at the safe house. After leaving the safe house, Dudija decided to get divorced and continue her life with her children in Banja Luka. Safe from violence, Dudija had to struggle for the survival of her youngest son, whose only way to survive was a liver transplant. The surgery could be performed only abroad and was extremely expensive – this was another struggle that Dudija Hibić had to face.

All the tragedies that Dudija Hibić had to face have not broken her spirit of a feisty and strong woman. Although she is a war victim, although she suffered heavy losses, Dudija does not harbour hatred and advocates co-existence and peace. She courageously deals with the consequences of abuse that lasted for entire 28 years and that significantly impaired her health. She has a positive attitude and believes that education and work are the right path to female emancipation and freedom. She managed to raise her children well and they are a great support for her today.

“Get educated, find a job, in order not to have to ask for anything from anyone, in order to live your life, so that nobody can say, I was the one who gave you this! Do not tolerate abuse for as little as 24 hours.”

Why a wallet? Because it is important that I do not ask for money from anyone, to have my life, so that nobody can say: I was the one who gave you money. I have to live and I have to live on what I have and earn. To be financially independent. To have my peace and do not let anyone harass me!”