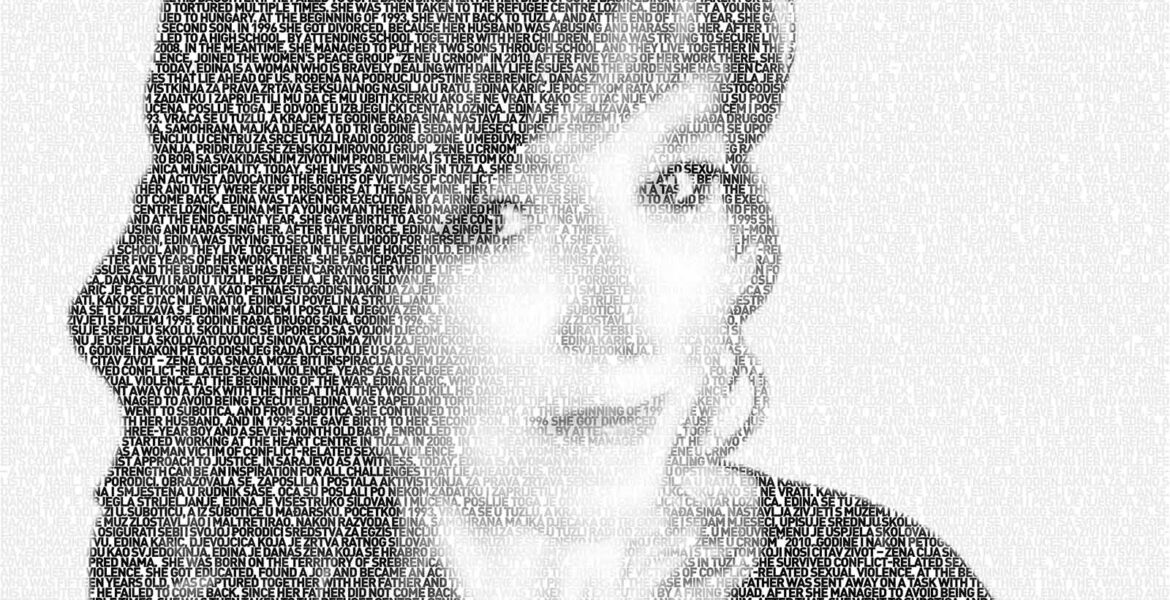 At the beginning of the war,  Edina  Karić,  who  was  fifteen  years  old,  was  captured  together  with  her  father  and  they  were  kept  prisoners  at  the  Sase  mine.  Her  father  was  sent  away  on  a  task  with  the  threat  that  they  would  kill  his  daughter  if  he  failed  to come back. Since her father did not come back, Edina was taken for execution by a firing squad. After she managed to avoid being executed, Edina was raped and tortured multiple  times.  She  was  then  taken  to  the  refugee  centre  Loznica.  Edina  met  a  young  man  there  and  married  him.  After  that,  she  went  to  Subotica,  and  from  Subotica  she  continued to Hungary. At the beginning of 1993, she went back to Tuzla, and at the end of that year, she gave birth to a son. She continued living with her husband, and in 1995 she gave birth to her second son. In 1996 she got divorced, because her husband was abusing and harassing her. After the divorce, Edina, a single mother of a three-year boy and a seven-month old baby, enrolled to a high school. By attending school together with her children, Edina was trying to secure livelihood for herself and her family. She started working at the Heart Centre in Tuzla in 2008. In the meantime, she managed to put her two sons through school and they live together in the same household.

Edina Karić, who was a woman victim of conflict-related sexual violence, joined the women’s peace group “Žene u crnom” in 2010. After five years of her work there, she participated in Women’s Court, a feminist approach to justice, in Sarajevo as a witness. Today, Edina is a woman who is bravely dealing with daily life issues and the burden she has been carrying her whole life – a woman whose strength can be an inspiration for all challenges that lie ahead of us.

“The best thing you can do for yourself is not to keep silent, not to retreat back into your shell, to talk more, to talk more about your problems, etc. We are not even aware what strength we have to fight.”

“I do not have an item that re-minds me of my past or constitutes a link to it. I do not have anything from the past, I failed to preserve anything. Not even pictures. Because it all stayed back in those moments, back in that time. Now, I have a small globe based on which I wish to say and show what I wish for. I would like to start a new life in a country that will understand me better. I would like to start a new life.”