Home Contact About
Home Kosovo Cinemas in Context: a reportage 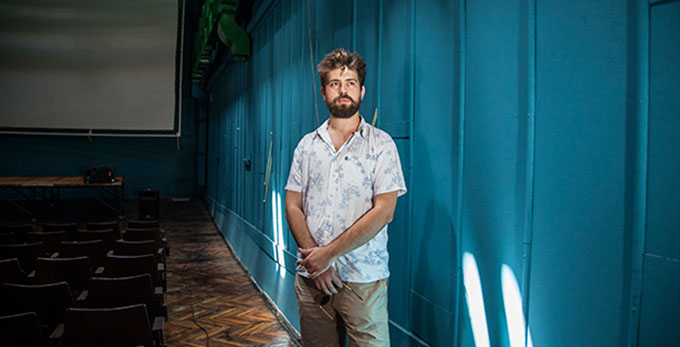 Kosovo Cinemas in Context: a reportage

My reflection on the relation between Kosovo cinemas, public spaces, community engagement, and dealing with the past is based on my ongoing experience with the process of reviving a former cinema and building a contemporary cultural institution engaged in experimental and artistic forms of research of the visual and material history. The starting point was an inherited cinema building serving partially as an archive, which had no written history or even a certain date of opening. Its historicization started in 2014. The campaign team of the Initiative for the Protection of Cinema “Lumbardhi”, aided by local heritage experts, filed the nomination that made the cinema a cultural heritage site and stopped its privatisation and subsequent demolition.

Reaching out to the community and relevant stakeholders over the years resulted in the need and opportunity to study the archives and contextualise the Lumbardhi cinema within both the modern history of Prizren and that of the development of cinema in Kosovo. Film and media scholar Bengi Muzbeg together with sociologist Tevfik Rada, who studied extensively the archives of Kino “Bistrica” and Kino “Rilindja”, also other archives and sources did so with skill. In the process, they gathered knowledge, which will be presented as exhibitions and publications in 2021 and 2022. Such knowledge will also guide further research. The learnings from this collaboration and their research have shaped my general knowledge about the development of film in Kosovo and have guided some of the ideas and insights in this text.

The first accounts of film screenings in Kosovo date back to 1911. According to Male Godine newspaper published in Belgrade, a traveling cinema from Cetinje screened a movie at a Hangar  in Peja. There is mention of a military cinema of the Austro-Hungarian Empire era in Kosovo, called Feldkino, before World War I. Also, there are references to short films and documentaries recorded in the country in those years. After World War I, in 1939 the Kingdom of Yugoslavia passed a law to regulate this new industry, which established the “Jugoslovenski prosvetni film” – the first institution of its kind in the region, which produced a number of documentaries and propaganda material in Kosovo in the ‘30s. The break that came with the World War II and the Italian occupation resulted in a lot of these visual documentations to be destroyed or lost, while the post-war period saw the beginning of a new era for this industry too.

Film production in Yugoslavia began in 1949 through production entities in Belgrade, like Avala Film and Slavija Film. The first film production and distribution institution, the “Cultural and Propaganda Center of the Autonomous Region of Kosovo and Metohija” was established in Prishtina in 1960. It went on to produce films and documentaries, including the first film in Albanian language, until its operations ceased in 1970, after the establishment of Kosovafilm in 1969. Yet, the cinefication of the country – or the construction wave of public cinemas – has already begun after the war, with an urgent pace throughout the ‘50s. Statements by politicians of the time underlined the importance of cinemas not only for amusement but also for education purposes. Cinema halls became centres of the project for the modernization of the state and society.

Kosovo Cinemas as a Mass Phenomenon

Built with collective actions and with the participation of local enterprises and citizens, the cinemas brought the world to the small towns of Kosovo, which were going through an accelerated transformation. The nationalization and expropriation of the private property made way for the construction of new public buildings, including cinemas. Such was the case of the house and garden belonging to the Petković family in Prizren, where Kino “Bistrica” (“Lumbardhi”) was opened in 1952. At its seventieth year, it stands as the oldest active cinema in Kosovo. Particularities aside, its history represents the fate of many cinemas across the country. Up until the ‘80s, the cinemas were spaces for mass experiences, showing a wide range of films from partisan ones and from the Yugoslav cinema to martial arts and Western films, to Bollywood and Hollywood blockbusters, even the occasional art house movies. Following a decline of audiences with the emergence of new forms of watching films, especially VHS, and the more broadly accessible television sets in the ‘80s, the political situation and the embargo, the shift to pornography and the condition of war in the ‘90s, the closing of Kosovafilm and many other occurrences, the cinema hit rock bottom. Simultaneously, this created a vacuum in which citizens, professionals, and enthusiasts were to take responsibility and provide or demand alternatives.

Kosovo Cinema after the War
In the post-war Kosovo and Prizren, there was no willingness to address the issue of cinemas or event attempt to find new systems for their revival and functioning. Due to economic unsustainability, Kino “Bistrica” enterprise stopped its operations in the beginning of 2000, making Prizren a city with no cinema. On the other hand, “Lumbardhi” became an abandoned space inhabited by its former workers and hosting the occasional local festival or concert. Compared to 42 cinemas that operated in 1975 and 34 in 1983, in 2000Kosovo had only one: Kino “ABC” in Prishtina, up until 2013, when old and new cinemas started to (re)emerge.

After the closure of Kino “Bistrica”, the citizens wanted to bring back a cinema to Prizren, a city with a tradition of filmgoing and with generations of cinephiles. This request was presented in the form of a film festival – DokuFest – which screened its first film at Kino Bahce (the open-air garden cinema)on 9 September 2002. This was repeated every year edition of this growing festival. In 2007, the Mayor of Prizren responded by signing a decision to demolish the Kino “Lumbardhi”, to make way for a parking lot or shopping mall.

This incited a protest during the 6th edition of DokuFest. The campaign collected 8,000 signatures, which put a stop to the process, saving the cinema. In 2012-2014 it operated as an informal bar, catching again the attention of authorities. In July 2014, the property administrator, the Kosovo Privatisation Agency, announced its liquidation and privatization. This incited another chain of reactions from the organizers of the festival, the local and the international community. At the opening ceremony of DokuFest they organized an act of protest, followed by a media campaign and debates. 58 non-profits came together under the umbrella of the “Initiative for the Protection of ‘Lumbardhi’ Cinema”, coordinated by DokuFest and EC Ma Ndryshe NGO. They succeeded in nominating the cinema to become a protected heritage site. In 2015, Lumbardhi Foundation was established to follow-up on other long-term demands of the community and to activate the cinema. This led to the gradual improvement of the building and development of programs which reinstated the function of the cinema . It also generated interest to research the history of Kino Lumbardhi and of the cinema of Kosovo in the 20th century.

Current Relevance of the Cinema in Kosovo

There are two equally important parallel developments for the present and the future of the cinema in Kosovo. Firstly, following the ‘90s decade of filming in VHS technology, Kosovo started to slowly develop a scene of filmmakers and film festivals. This has paved the way for international networking, education opportunities, and development of filmmakers and (co-)productions that emerged in the 2010s. They have participated in major international film festivals and have received many valuable awards. Such success has created positive opinions about increasing investment in culture and about the role of arts in portraying the realities and complex experiences of a society.

Secondly, independent cultural organizations from Peja, Prizren and Prishtina have established film festivals, which have contributed to the development of a wave of filmmakers and of a cinema culture in Kosovo. In 2013, these organizations constructed Kino “Europa” (over the demolished Kino “Radnik”) in Prizren. They activated Kino “Jusuf Gervalla” in Peja in 2014, Kino Lumbardhi in Prizren in 2015 and Kino “Armata” in Prishtina in 2018. All these cinema halls were built between the ‘50s and ‘70s. An initiative kicked off in 2020 about activating Kino “Rinia” in Prishtina. The Ministry of Culture has also expressed its intention to activate a network of cinema halls in Kosovo and to invest in reviving their infrastructure.

Kosovo Cinema as Sites for Dealing with the Past

Cinema halls go hand in hand with the emergence of other cultural and social spaces in Kosovo cities of the forms of partnership between organizations, municipalities, and other authorities, and with specific problems that have arisen. There is an urgent need to regulate the financial and legal infrastructure, and by drawing on the experience, to design the model for managing and developing museums, cinema halls, and other cultural spaces.

The emergence and activation of these spaces has brought together the buried history and the new generation of activists and professionals. it has also triggered a dialogue between the generations who remember the past lives of these institutions, and those who are eager to learn about them and make the spaces usable. It has also provided functional models for the management and maintenance of cultural heritage sites and public infrastructure through the bottom-up approaches, while encouraging the recognition and preservation of modernist heritage, or the creation of a digital Oral History Archive. These spaces have become sites to be in touch with the history of a building and of a period, sites to discuss about and pay visits to their histories and legacies, but also lively sites for performances, screenings, gatherings and talks, or platforms of resistance against uncontrolled urban development and for participatory visioning, management and use of public infrastructure.

Some studies around Kino “Lumbardhi”, “Rilindja”, Kino “Jusuf Gervalla” and Kino “Rinia”, alongside the work of the research community through the individuals and organizations conducting or supporting research, have shed light upon the great potential of subjects from cultural history that help understand the developments and changes from the past, but also to the lack of archives and well-organized and accessible knowledge sources for researchers or the public.

While there are positive developments and increased collaboration between actors, a larger impact requires long-term investment. Capacities should be built through institutes, education  and support programs, and international collaboration. The restoration and revitalisation of select sites of memory, as well as the digitisation and opening of various resources to public access will require its time. However, these conditions are necessary for the spaces to function, for various programs and formats to be offered to audiences for a long period of time, to create a better understanding of experiences from the 20th century and generate pluralistic, inclusive, and accessible archives and narratives.

Ares Shporta is the Co-Founder and Director of Lumbardhi Foundation. He leads the revival and institutional development of Lumbardhi Cinema. Shporta holds a Master of Arts on Cultural Management from the Istanbul Bilgi University with a focus on participative models of cultural governance at the local level. He has written texts, drafted strategies and served in numerous boards, committees, and councils related to cultural and urban policy, civic-public cooperation, and civil society development. Shporta is the President of Platforma Kooperativa, a regional platform for culture in South-Eastern Europe. He is also the Chairman of the Network of Cultural Organizations in Prizren, and a member of the Advisory Board of the Innovation and Technology Park in Prizren.