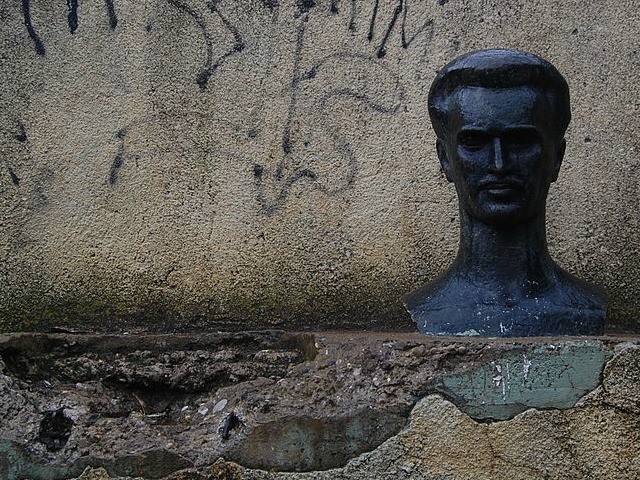 The Pristina authorities will consider restoring a monument celebrating Serb and Albanian anti-fascist cooperation in WWII after a one-man protest by the head of the Union of Montenegrins in Kosovo.

The head of the Union of Montenegrins in Kosovo, Slobodan Vujicic, said that the Pristina municipality has promised to examine the possibility of restoring the bust of a wartime Montenegro-born Serb, Yugoslav Partisan fighter Boro Vukmirovic, to the monument in the Kosovo capital’s city.

Busts of Vukmirovic and his Albanian Partisan comrade Ramiz Sadiku stood side by side in the park for decades, but the Serb’s head was removed after the Kosovo Liberation Army’s war with Belgrade’s forces ended in 1999.

“I think that the bust of Boro Vukmirovic should be returned next to Ramiz Sadiku’s bust since they are a symbol of the fight against fascism and a symbol of the possible coexistence of all communities in Kosovo,” Vujicic told BIRN.

Vujicic spent Monday night in the park in a one-man protest, also calling for the restoration of a plaque naming a street after Montenegrin poet Radovan Zogovic.

He said that on Tuesday he was visited by the Pristina municipality’s director of culture, Besart Vllahinja, who promised him that the authorities "could return the bust and the plaque".

But the spokesperson for the Pristina municipality, Adonis Tahiri, told BIRN that the authorities first need to find out how and why the bust was taken down.

“We don’t know the conditions in which this bust was removed, so initially we need to figure this out,” Tahiri told BIRN.

Vujicic said that restoring the bust to its rightful place would demonstrate tolerance.

“Kosovo must be built on anti-fascism and must cultivate and safeguard these values on its path towards the European Union,” he said.

Tahiri also said that it was not the first time that the plaque indicating the street named after Radovan Zogovic has been removed, but confirmed that the municipality will replace it.

“A street named Radovan Zogovic exists in Pristina. We have identified the problems with the removal of the plaque and whenever it happens, it will be replaced by us,” he said.

For decades, Boro and Ramiz were a symbol of multi-ethnic Yugoslavia.

In the Yugoslav era, pupils in Kosovo used to learn a patriotic poem about the two Partisan soldiers.

The poem – which was learned by schoolchildren in both Serbian and Albanian – described the Serb, Vukmirovic, and the Albanian, Sadiku, as “two bodies of the same blood”.