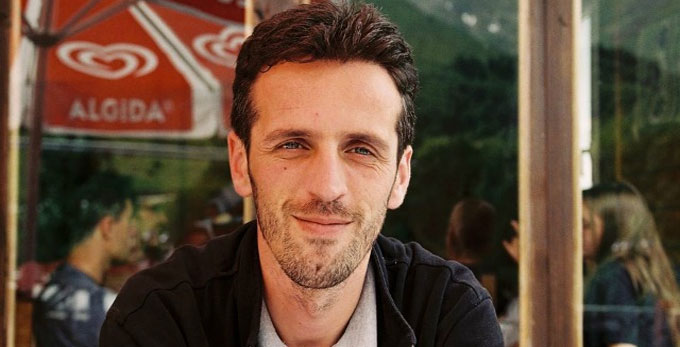 When director Gazmend Bajri met the subject of his latest film, he found an outlet for his feelings about how he himself suffered during the Kosovo war – and how he dealt with the trauma afterwards.

Gazmend Bajri might use other people’s experiences in his films, but his understanding of how they think and feel is based on his own experience.

The Kosovo-born director and cameraman’s most recent documentary, ‘Ferdonija’, tells the story of Ferdonija Qerkezi from Gjakove/Djakovica, who lost her entire family during the war with Serbian forces in the late 1990s.

In March 1999, the Gjakove/Djakovica area was the scene of some of the bloodiest crimes of the war; Qerkezi’s husband and four sons were all killed.

Like many others women in the area, Qerkezi is a member of an association of women who lost members of their families, called The Mothers’ Calls (Thirrjet e nenave) – but she is the only one of them who lives completely alone.

Qerkezi opened a museum at her home in order to commemorate her loved ones, and Bajri decided to document her story, focusing on Kosovo’s post-war reality through the experience of those who lost their families and continue to live with the trauma.

He heard about The Mothers’ Calls by chance back in 2014, and decided to pay them a visit.

“Women in Gjakove meet frequently and talk about what happened during the war. When I visited them, they started to tell me their stories; there was no need to ask the questions, they were so willing to tell me what had happened to them,” Bajri told BIRN.

Some of the women advised him to visit Qerkezi and her museum of remembrance.

“When I came to visit her, she’d be very open. She talked to me and cried a lot. With time, our relations became closer, even friendly,” he recalled.

“I worked on this movie for two years, but I didn’t want to focus what happened to Ferdonija’s sons and husband. These people were killed and nothing can change that,” he explained.

What he wanted to discover was how someone can continue living after such a tragedy, and how Qerkezi is managing to overcome what happened to her family.

Bajri said that he too, like the majority of Kosovo Albanians who remember the war time, is also dealing with the post-conflict trauma.

“That’s why for me personally, meeting Ferdonije was difficult, intense, full of different feelings. Her house, rooms which reminded [her] of her husband, her children, their shoes and clothes with blood on them… She keeps all their things. This experience is really powerful,” he said.

“Every war brings traumas. I wanted to discover how we can deal with it. We as humans, we as society,” he explained.

Beaten in a basement

Bajri remained in Kosovo during the war and was imprisoned in a basement by Serbian forces along with two of his neighbours, one over 70 and the other a 50-year-old woman.

“They’d wear black uniforms without emblems, and they’d beat us for hours. I feel no hate, but I’d like to meet them today and ask why they were doing this,” Bajri said.

He recalled how the group of Serbs once beat him up for around seven hours, mostly hitting him in his head.

Bajri then spent a month in hiding, and after the Serbs left, he moved to another place, when he got help from a local doctor, who was in hiding too.

After it was all over, he said found it very hard to share his experiences of the war, although he did start to talk about it to his family.

“The first years after the war were very euphoric, we didn’t think about traumas. There were so many things to do immediately, the time was passing by so fast,” he recalled.

Then, around 2007, he noticed that he was starting to feel more and more depressed. The things that he had forgotten started to come back.

His brother insisted that he talk about what happened, but the feelings of anxiety persisted until he started making ‘Ferdonija’.

“In 2014 when I started to work on the movie about Ferdonije [Qerkezi], I was feeling really anxious. The first moments, the first visits to Gjakove were very difficult for me. They were full [of an uneasy] empathy. Anyway, today it’s much easier to me, the fact that we’re talking about this now openly, shows that there’s huge progress,” he said.

He believes that today in Kosovo, there are plenty of people who are living with post-war trauma, but keep silent about it. Despite the fact that the problem is widely known, no one in Kosovo has dealt with it in a systematic way, he said.

“I think that the majority of people haven’t even had the chance to talk to someone about what happened, they keep it to themselves, they continue to live with a trauma that is not healed, and this is a huge problem,” he explained.

He said that in Kosovo, there are also no statistics or serious pieces of research on post-war trauma, and that there is no one who addresses the trauma of women like the members of The Mothers’ Calls.

“Kosovo society failed to manage the problem of trauma; we have no system, and therefore maybe therapy through art is worth considering,” he suggested.

Asked if something has changed since the wars in the former Yugoslavia, Bajri responds that isn’t sure. But does say that that even people he knows in Serbia cannot comprehend what people like him went through.

“My Serbian colleagues are always in shock when I tell them what was happening in Kosovo. People are under-informed. And a lot of energy is being invested in nationalism,” he said.