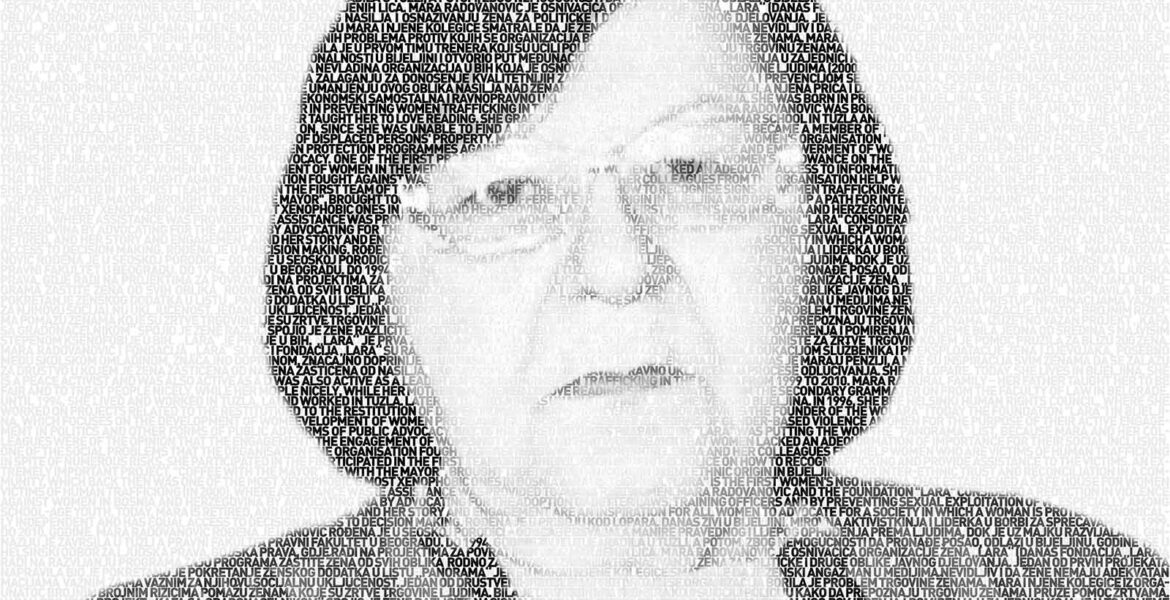 She was born in Priboj near Lopare. Today, she lives in Bijeljina. She is a peace activist and was also active as a leader in preventing women trafficking in the period from 1999 to 2010.

Mara Radovanović was born in a rural family – her father taught her to be fair and to treat people nicely, while her mother taught her to love reading. She graduated from the secondary grammar school in Tuzla and later on from the Faculty of Law in Belgrade. Until 1994, she lived and worked in Tuzla. Later on, since she was unable to find a job, she went to Bijeljina. In 1996, she became a member of the Helsinki Human Rights Council, where she worked on projects related to the restitution of displaced persons’ property. Mara Radovanović is the founder of the women’s organisation “Lara” (today the foundation “Lara”) in Bijeljina, which focuses on the development of women protection programmes against all forms of gender-based violence and empowerment of women for the purpose of their active engagement in politics and other forms of public advocacy. One of the first projects prepared by “Lara” was putting the women’s allowance on the “Panorama” magazine, because Mara and her colleagues were of the opinion that the engagement of women in the media was not visible and that women lacked an adequate access to information of importance for their social inclusion. One of the social problems that the organisation fought against was women trafficking. Mara and her colleagues from the organisation help women who are victims of human trafficking in spite of numerous risks. She participated in the first team of trainers that trained the police on how to recognise signs of women trafficking and provide assistance to the victims. An extremely important project, “Coffee with the Mayor”, brought together women of different ethnic origin in Bijeljina and opened up a path for inter-ethnic trust and reconciliation in a community, which back then was one of the most xenophobic ones in Bosnia and Herzegovina.

“Lara” is the first women’s NGO in Bosnia and Herzegovina that established a safe house for women victims of human trafficking (in 2000), where assistance was provided to almost 200 women. Mara Radovanović and the foundation “Lara” considerably contributed to a reduction in violence against women in Bosnia and Herzegovina by advocating for the adoption of better laws, training officers and by preventing sexual exploitation of women and girls, especially among school-age youth. Today, Mara is retired, and her story and engagement are an inspiration for all women to advocate for a society in which a woman is protected from violence, economically independent and has equal access to decision making.

“Women in Bosnia and Herzegovina have demonstrated that they were the most conscious segment of the society. When everyone was focused on achieving their own goals, women were working on collective issues. Since the end of the war, they started meeting and working together. Trying to build peace together. What was my inspiration in the most difficult moments? The women surrounding me!”

“I choose a book. I always come back to it. When I was five, I learned how to read thanks to a song book, in which every first letter was a calligraphic letter. I remember that I took the children’s book “Čudnovate zgode i nezgode šegrta Hlapića” by Ivana Brlić Mažuranić. The book was written in Latin letters and I could read only Cyrillic ones. I want-ed to discover what was happening in the book, so I started learning the Latin script on my own by identifying the letters I knew.”