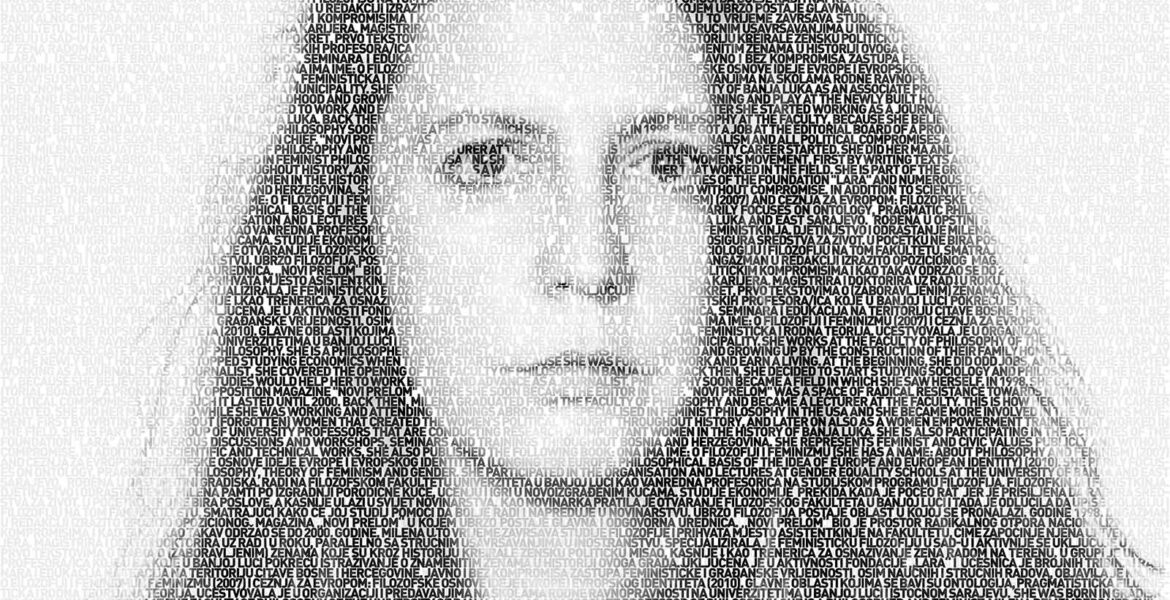 She was born in Gradiška municipality. She works at the Faculty of Philosophy of the University of Banja Luka as an associate professor of philosophy. She is a philosopher and feminist.

Milena remembers her childhood and growing up by the construction of their family home, learning and playing at the newly built houses. She stopped studying economics when the war started, because she was forced to work and earn a living. At the beginning, she did odd jobs, and later she started working as a journalist. As a journalist, she covered the opening of the Faculty of Philosophy in Banja Luka. Back then, she decided to start studying sociology and philosophy at the faculty, because she believed that the studies would help her to work better and advance as a journalist. Philosophy soon became a field in which she saw herself. In 1998, she got a job at the editorial board of a pronouncedly opposition magazine “Novi prelom”, where she soon became the editor in chief. “Novi prelom” was a space of radical resistance towards nationalism and all political compromises and as such it lasted until 2000. Back then, Milena graduated from the Faculty of Philosophy and became a lecturer at the faculty. This is how her university career started. She did her MA and PhD while she was working and attending trainings abroad. She specialised in feminist philosophy in the USA and she became more involved in the women’s movement, first by writing texts about (forgotten) women that created the women’s political thought throughout history, and later on also as a women empowerment trainer that worked in the field. She is part of the group of university professors that are conducting research on important women in the history of Banja Luka. She is also participating in the activities of the foundation “Lara” and numerous discussions and workshops, seminars and trainings throughout Bosnia and Herzegovina. She represents feminist and civic values publicly and without compromise.

In addition to scientific and technical works, she also published the following book: Ona ima ime: o filozofiji i feminizmu (She Has a Name: about Philosophy and Feminism) (2007), Čežnja za Evropom: Filozofske osnove ideje Evrope i evropskog identiteta (Longing for Europe: Philosophical Basis of the Idea of Europe and European Identity) (2010) and U lavirintima bića. Ontološka rasprava (In the Labyrinth of Beings. Ontological Argument) (2014). She primarily focuses on ontology, pragmatic philosophy, theory of feminism and gender. She participated in the organisation and lectures at gender equality schools at the University of Banja Luka and East Sarajevo.

“Every generation of women has to re-examine from scratch what feminism is, how they approach it and what feminism means at an individual level. Feminism relates to her body, her mind, her female soul. Whatever has been achieved, should not only be preserved, but one needs to continue fighting individually or within a group. Someone might think that the previous generation has not left much, but, actually, it left very, very much and it would be a pity if the new generation failed to use it.”

“Books have defined my life. I was simply one of those kids that could read and write be-fore going to the elementary school. I always thought that I would publish a book. I was one of those kids whose essays on books that we read as part of our school reading materials were copied – simply because I have al-ways loved books. After I had obtained a scholarship, I started writing for the foundation “Lara” on their portal back then. I wrote feature articles about history, women and philosophy. I sat down, started writing a book and finished it quite fast. What matters to me personally in case of the book is the dedication – I dedicated it to Branka, my mother. The book is dedicated to my mother, to all mothers actually!”