Home Contact About
Home Midhat Izmirlija: Who is guiltier or more responsible? 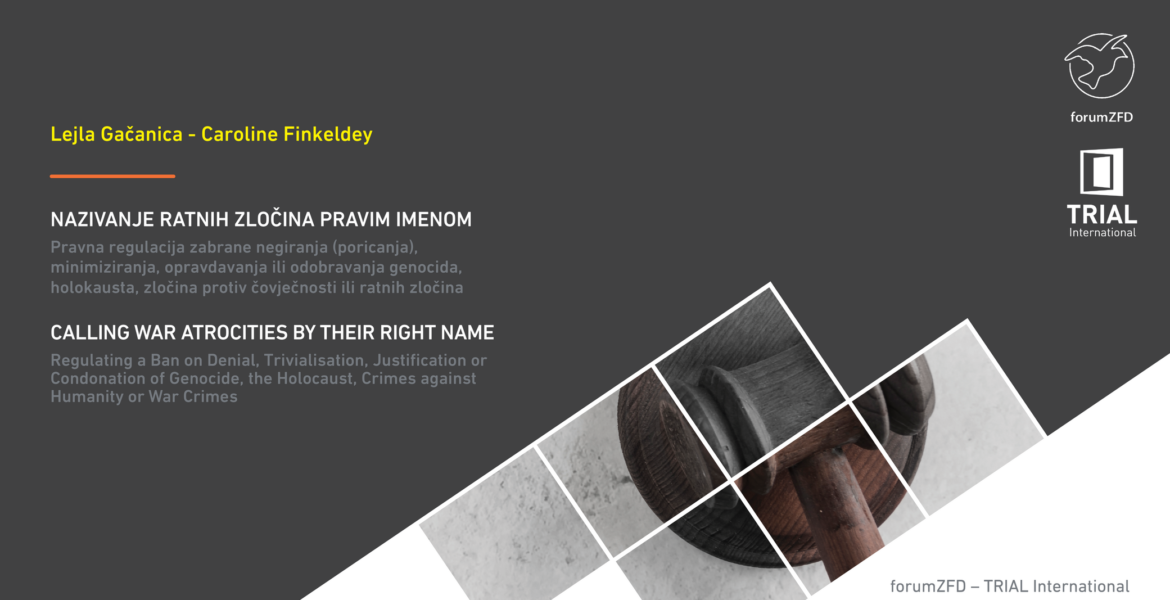 Midhat Izmirlija: Who is guiltier or more responsible?

In my opinion, there has never been an adequate framework or a comprehensive understanding of transitional justice mechanisms, rather on the contrary, there are various systems that were established or there was an attempt to build them through various frameworks or parts of the society. Criminal proceedings are one thing, but in case of other mechanisms, there has not been a comprehensive approach. Even other mechanisms have become parts of something that was happening, but not as an interpretative or integral process that was supposed to go towards the goal – facing the past, facing the things that happened.

Midhat Izmirlija is an Assistant Professor at the Faculty of Law of the University of Sarajevo in charge of the scientific subject theory of law and state. He obtained his MA degree in Law from the Faculty of Law in Sarajevo and his second MA in Human Rights and Democracy from the Centre for Interdisciplinary Post-Graduate Studies of the University of Sarajevo. He obtained his doctoral degree in Law from the Faculty of Law in Sarajevo. He has published several scientific works and his areas of research include human rights, functions of state, theory of law and transitional justice. Set between the scope of transitional justice in Bosnia and Herzegovina and daily narratives about the past, criminal law, accountability and judgments of the ICTY remain trapped in interpretations and objections. By analysing these segments, Midhat brought up the issue of the implementation of laws that would prohibit the denial, minimisation, trivialisation, justification or condonation of genocide, holocaust, crimes against humanity or war crimes in a country in which every ethnic group has its own version of truth about the war and heroes they hang onto by their fingernails.

L. G.: To what extent are war narratives present in our daily lives?

M. I.: I believe that war narratives, among other things, appear in the public in relation to war crimes proceedings. This was especially the case when the ICTY was in the focus due to handing down sentences of perpetrators of war crimes. Then, of course, war narratives are present in case of memorialisation, in case of anniversaries of killings of individual groups in towns, cities, villages and municipalities. In case of persons who survived the war in Bosnia and Herzegovina, war experiences are probably mentioned often. It is all experienced on an individual or personal level. In the family, in the society, in contacts with colleagues and friends. In my opinion, they frequently appear in online discussions, social networks, portals – every discussion boils down to war, to crimes that were committed – who started the war, who is responsible?

L. G.: How is the war portrayed? Which and what kind of war narratives are present?

M. I.: I believe that the war is seen in a simplified manner. It is viewed from the perspective of a perpetrator – victim, aggressor – victim defending himself/herself. Those who were attacked and those who are defending themselves. There are two poles in relations when it comes to the war discourse. It is a line, we versus them, in every group. If we are talking about ethnic groups, this is a simplified view of war narratives, in case of which some are victims, and others are perpetrators.

L. G.: Between victims and perpetrators, who are actually heroes?

M. I.: Everyone has their own heroes. And I believe that this is also the case with this division into victims and perpetrators. For a victim, this person is a perpetrator. However, in that group, this person is not a perpetrator. We have judgments in which persons were sentenced and found guilty, but the groups they belong to do not perceive them as responsible for war crimes, but rather as heroes, as persons who defended ‘their’ group, persons that contributed to the survival of the group. So that hero, and not criminal, is unfortunately also part of the war narrative, if we can sum it up in such a simple sentence. Facts established in court proceedings are manipulated with.

L. G.: How do these narratives, or this polarisation of narratives, reflect themselves on the society?

M. I.: The effect of these narratives on the society is such that there is no trust in the society. They impact the reconciliation in Bosnia and Herzegovina, among citizens of Bosnia and Herzegovina, among members of various ethnic groups. The possibility to face the past and contribute to determining and establishing facts about what happened in the past is being avoided. Reciprocity, it is a competition regarding who is guiltier or more responsible.

L. G.: Where are the judgments of the ICTY, now the Residual Mechanism in Bosnia and Herzegovina? How are they perceived here?

M. I.: The ICTY and the whole Outreach Programme of the ICTY has probably not achieved its full purpose. The public at large knows very little about judgments and facts established in judgments and why someone was found guilty. Discussions mostly focus on judgments, if a person was found guilty, why the sentence is so high, whether it is adequate and whether it should have been stricter or not. Or, if these are situations in which persons were not found guilty, then the ICTY is accused of not fulfilling its functions, meeting its obligations, etc. On the other hand, there is a very biased view of judgments of the ICTY, of the court itself, which is seen as a political court, political justice. Unfortunately, the understanding of the role of the court, or courts in general, is distorted. I somehow have the feeling that we support the judgments of the court when they are in our interest, whatever interest it is, but we do not support them when they are not. Courts pass judgments based on established facts. This is generally the case. The best example are discussions about the rehabilitation of certain persons convicted of war crimes after World War II – whether the conviction of Dražo Mihajlović was a decision of a political court, and if this was the case, that justice has not been obtained, so that initiatives for a rehabilitation appear, and at the same time, court judgments are supported in case of some other persons, such as the conviction of Stepinac. It is impossible that in some cases these are always political decisions, and in others legal decisions.

L. G.: Can it be useful to legally prohibit the denial, minimisation, trivialisation, justification or condonation of crimes, and which ones?

M. I.: This is a very important, even crucial question, and the answer in general would be yes. It would be necessary to prevent the denial of genocide, holocaust and other crimes, and I will not use the word ‘regulate’ on purpose. The issue of a legal regulation is a very sensitive issue. An additional issue is whether legal regulations, if they are adopted, can be effective and efficient, whether they can be implemented. The worst thing is to regulate something, without ensuring the implementation. As a result, there is no trust in the state, primarily rule of law, because what importance does a regulation have, if nobody complies with it, i.e. if there is no mechanism to implement it? On the other hand, if we are going to regulate these issues, how are we going to establish an efficient mechanism, given how fragmented our whole system is? Can it be done at the state level? A completely different issue, unrelated to criminal law aspects, is the understanding of the public that a crime should not be denied if the relevant facts were established. It is a matter of being aware, to what extent we are actually aware of established facts. That is facing the past, accepting what has happened in the past.

L. G.: What would in your opinion be a better option when it comes to prohibiting denial, minimisation, trivialisation, justification or condonation of genocide, holocaust, crimes against humanity or war crimes – to adapt the existing criminal codes or have a separate law dealing with this issue?

M. I.: It might be better to have a separate law. A separate law, in addition to the criminal part, would ensure a possibility to regulate other situations we mentioned, not only the denial, but also names of streets, associations, street signs, and everything else, which would ensure a more comprehensive structure and framework. It is just a matter of how it would be proven. That is my greatest dilemma in all of this.

L. G.: If we had such laws, what would be their consequences or their impact?

M. I.: The essence is actually ensuring that there is no culture of impunity and that perpetrators are held responsible. Secondly, nobody should manipulate using this and the public, individuals should know that some things are not allowed in a civilised society, because we need to be aware and face the past and things that happened in the past. That is the purpose of the legal regulation. It is one of the possibilities, but I am afraid that in our context, in our system – due to the nature of the system – it might turn into the opposite. That is what I am afraid of. I believe that in addition to legal regulation, other activities should be implemented as well in order to raise the awareness regarding the inadmissibility or unacceptability of certain types of behaviour. This, in particular, is the obligation of ministries of education, textbook policies, etc. – to create a different view. We should not hope that we will resolve these issues by merely adopting a law. We should be aware of this.
Sarajevo, 2019/2020
/p>

Forum Civil Peace Service (forumZFD) and TRIAL International, organisations that have been active in the field of transitional justice and facing the past, initiated a constructive dialogue about the necessity to adopt a law on prohibition of denial of genocide, holocaust, crimes against humanity and war crimes against the civilian population in 2019. In an attempt to establish and hold open discussions with various actors and relevant groups about this topic, but also a wider dialogue and to raise awareness of the public at large and politicians about the topic of facing the past, a researcher, Lejla Gačanica, conducted a series of interviews with relevant persons as part of the publication Calling War Crimes by Their Right Name – Nazivanje ratnih zločina pravim imenom. The publication can be accessed by using the following link.