Home Contact About
Home “not to be repeated!”: ongoing trauma for victims of bosnia-herzegovina civil war 20 years later. 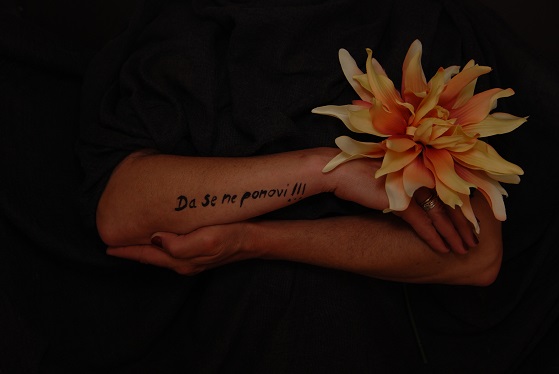 “not to be repeated!”: ongoing trauma for victims of bosnia-herzegovina civil war 20 years later.

‘Women across Borders’ is a global awareness campaign, shedding light onto the issue of sexual violence around the world. Photographer and executive producer, Stephanie Koehler, traveled to various Balkan states in 2015 to interview female survivors of sexual violence and experts in the field. Part of the campaign is a personal message from each survivor that is captured photographically. Her findings will be published in a series of articles documenting the stories of women in each of the countries she visited.

When I first arranged my interview with Hasija, I was unaware that she was one of the first women to testify before the International Criminal Tribunal for the former Yugoslavia in The Hague. I had only known the first names of my interviewees to ensure complete privacy. As our dialogue started, she mentioned that she no longer felt the need to speak out about her experiences, but she was motivated to participate in my campaign because she felt that there is still a need for more Hasijas.  Hasija has given many interviews since she first spoke out, and has been an integral part of shedding light onto the atrocities of the war in the 90’s. Rather disillusioned with the outcome of her many interviews, she feels that she alone cannot change anything.

In May of 1992, when the war first began, Hasija was taken from her home at the age of 22, and kept in one of the war camps for almost 2 months. During this time, she was repeatedly raped by a number of Serb soldiers. Hasija was the youngest woman in the camp. She had lived in what was then Serb territory. The father of the soldier who had kidnapped her recognized her as his neighbor, and helped her to flee, putting her on a bus for her escape. She went to live in the Sarajevo area, not knowing whether her family was still alive. Unfortunately, her perpetrators were never brought to justice.

Today, she lives with her mother and younger siblings, and is the main supporter for the family. She does receive some retribution through a fund for civil victims of the war, which is not available to all women in Bosnia-Herzegovina (BiH), but only those residing in the Federation of Bosnia. The process of attaining this status is arduous, and often re-traumatizes the women.  Hasija is still fighting the trauma she endured despite the counseling she received. My sense was that she felt betrayed and wished that the overall support from women’s organizations would be better. Because so many women died without ever telling their stories, Hasija questions whether her sharing ever made a difference. She would welcome more support for women like her, especially financially, in regard to housing and the job market, yet has not seen any change.

Dr. Janine Natalya Clark, Assistant Professor of the school of law at the University of Birmingham, is studying the long-term consequences of rape in Bosnia, and has been working with Snaga Žene (translated: The Power of Women) in the canton of Tuzla since October of 2014. Her background is in international relations and transitional justice. In the 90’s, there was a proliferation of books about rape, she reports, but not much has been published since then. She says, “In order to comprehend transitional justice, one needs to understand the long-term needs of victims.” Through her interviews with survivors of war, she intends to shed light on that, and hopes that her book will help bring awareness to the issue.

In a conservative country such as BiH, even subjects like breast cancer are taboo. Therefore, more campaigns are needed to help educate and change the mindset of the people. Although no statistics officially back this number, it is believed that approximately 20,000 women were raped during the war in the 90’s. Today, many of them suffer from domestic violence as a direct result of the trauma inflicted back then. Dr. Clark says, “The combination of highly traumatized individuals in bad economic situations, and men who are not capable to fulfill their patriarchal role to provide for their families due to the lack of work, is a recipe for disaster. And nobody is tackling this issue.”

Similar to disastrous situations in other parts of the world, lots of money was poured into the Balkans after the war, and the hope for recovery was high. Now, donors have lost their interest; still-existing issues are no longer reported, the economy has stagnated, and corruption is rampant. Media is so sensationalized that without killings no news will be worth sharing, and the work to be done falls back onto NGOs in the country.

Žene Ženama (translated: Women to Women), the organization that connected me with Hasija, was founded in 1997, and is one of BiH’s women’s organizations in Sarajevo that focuses on human rights for all women of Bosnia-Herzegovina, encourages the collaboration of social networks locally, and ensures that women’s needs are addressed by working closely with government, media and other NGOs. In a survey conducted in 2014, they sought to discover the four main issues that kept women from flourishing in their society. 400 women and men throughout BiH (both rural and urban areas) participated. What became apparent was:

1. Many women still did not know their rights,

2. Domestic violence against women and children was widespread,

3. Even though laws to protect women against violence exist, they are not implemented, and

4. Women are disadvantaged in the job market, both in availability of jobs and equal pay.

To make the subject of sexual violence less taboo, Hasija suggests that the law be changed. The law protecting civil victims of war is not specific to survivors of sexual violence because it includes those who endured other injuries. If those funds were geared toward rape victims alone, the process of applying for such status would be less complicated and intimidating for those affected, and its availability would be more known to the general public. She welcomes campaigns seen in schools that result in people being more open to listening about domestic vs. sexual violence.

Dr. Clark confirms obstacles women survivors have in common: not being able to sleep, flashbacks, not liking to be confined in enclosed spaces or being alone. And as I found in my work with women in the United States, she too reported that some women were incredibly resilient and quickly grew from victim to survivor. Others were still trapped in the role of victimhood. The difference was how they had dealt with their trauma. Dr. Clark mentions the wealth of available support in areas such as Tuzla vs. more rural areas where help is not available to victims. Those who have good emotional support are likely to have a better chance of recovery. But she says, “It is not enough to heal the mind of the individual. You’ve got to give them a reason to live.”

Dr. Branka Antić-Štauber, founder of Snaga Žene in Tuzla, BiH, is a wonderful example of how their work transforms the lives of others. Her medical background and long-term work with women prior to the war allowed her to study and understand the effects of stressors to a woman’s health. At Snaga Žene, they serve multiple generations in multi-disciplinary programs. In Tuzla, approximately 5000 people, mostly women and children, still live in camps. Mothers without much education and who are also highly traumatized, and dealing with their own emotional and psychological issues, now have to step into the roles of their deceased husbands to provide for the family. Children are often left to their own devices. The trauma endured by their mothers is now transferred to the younger generations; children grow up with not one, but three truths about what actually happened during the war, depending on which ethnic group they belong. This leads to a continued riff among each group. At Snaga Žene, kids aged 3-6 are offered counseling, tools for conflict resolution, speech pathology, and general preparation to become engaged students. They are taught that victims of war exist in each group, and that it is up to each individual whether they continue to justify their decisions today based on the war 20 years ago.

Snaga Žene also accompanies victims of war to court proceedings, and prepares them for hearings. Strangely enough, perpetrators have the right to question their victims, but not vice versa. In their horticultural program, women with interest in gardening can work in greenhouses or in the fields, growing and harvesting lavender, calendula and echinacea. Hormone levels are directly impacted by working outdoors, and by touching the soil and plants. Lavender, calendula and echinacea have a positive effect on the spiritual, mental and physical body. With balanced hormones, the health of thyroid, gall bladder and liver also increases, and the overall health of women improves. It has a wonderful impact on the women working in the field, and also on those around them. What started with only 7 women, now occupies 72 women in this particular program. Amazing results.

Returning to Hasija, it is my hope that her story not only serves to encourage other women to speak up and share their stories, but that those shared experiences will eventually lead to changes in laws and continued financial support from national and global communities. She is a remarkably strong woman. Meeting her enriched my life.

Her quotation chosen for this campaign repeats the message she sent many times: “Not to be repeated!” (Da se ne pomovi!!!)

Stephanie Koehler is a journalist and photographer residing in California. Her goal of ‘Women across Borders’ is to unite women all over the world to document the pain they endure as a result of sexual violence and the healing approach they take to grow from victim to survivor. Her work started in the U.S. and took root in form of interviews with women in various Balkan States and Germany. Her articles include photo essays of female survivors, and are platforms to tell their story. Her former work can be read on The Women’s International Perspective. Stephanie’s vision is to grow this work into a global sexual assault awareness campaign.