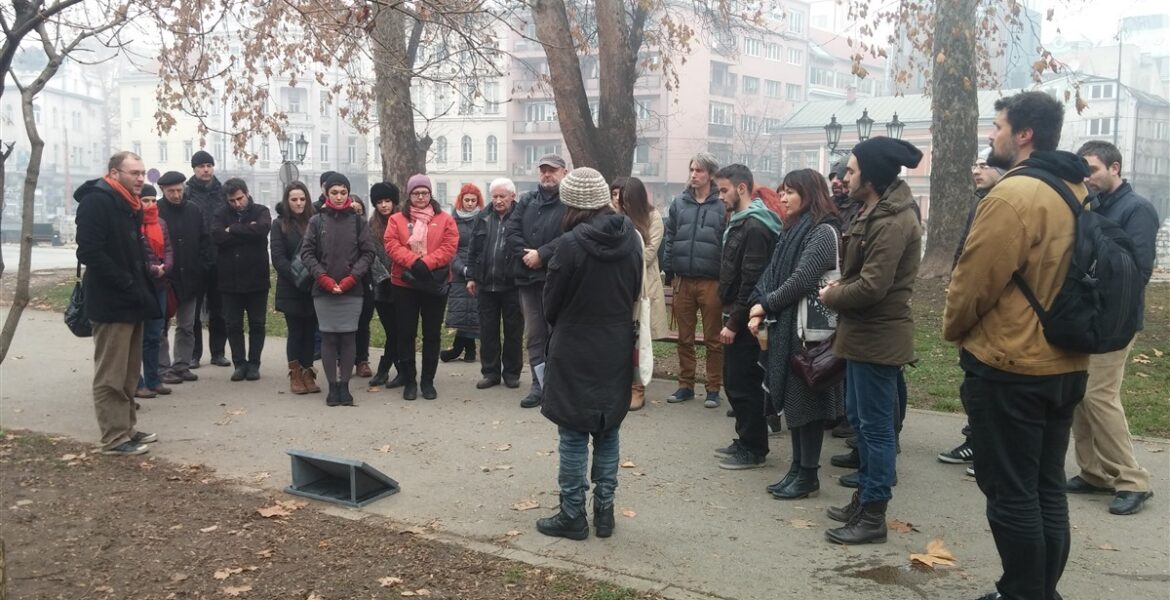 A group of people gathered in Sarajevo to commemorate the killings of Serb civilians during the siege of the city in the 1990s and put up a makeshift plaque to honour the victims.

A group of around 30 people gathered in the At Mejdan Park in Sarajevo city centre on Monday to commemorate the killings of their Serb neighbours by the Bosnian Army in Kazani in the hills above Sarajevo during the war.

The commemoration was organised by a group called Because it Concerns Me, which also put up a makeshift plaque in the park dedicated to those killed, which said: “To the civilian victims of the war crimes in Sarajevo committed by members of the Bosnian Army’s Tenth Brigade.”

In a speech at the commemoration, Aldijana Okeric from the Youth Initiative for Human Rights said it was time for “politicisation of the crime in Kazani to stop”.

“Sarajevo suffered horrific crimes by forces that kept the city under siege, but we must also never forget the victims inside the city. This crime is spoken of very little. We, the citizens of Sarajevo, are responsible for returning dignity to the victims. Today we honour them,” said Okeric.

She called on the authorities to build a permanent memorial to the victims on Kazani and to create an independent commission to determine the truth about the killings of Serbs and Croats at Kazani by Bosnian Army troops.

Adnan Hasanbegovic, a former member of the Bosnian Army’s Tenth Brigade, told BIRN that he was taking part in the commemoration because the crimes at Kazani were being ignored.

“This is an unfinished story. The courts haven’t completed prosecutions for this crime and it is often being denied. This is why we need the truth and a memorial in the city centre. As a member of this brigade, I want to extend my sympathy to all the victims,” Hasanbegovic said.

During the three exhumations at Kazani, 23 people’s remains were found, and 15 of them identified.

The Bosnian Missing Persons Institute told BIRN that these were the remains of five female victims and ten male victims, aged from 27 to 66 years.

The victims at Kazani are believed to have been killed by Bosnian Army troops led by notorious commander Musan Topalovic, alias Caco, who was killed in October 1993 and buried in a secret grave, but later exhumed and given a hero’s burial in Sarajevo.

Four ex-soldiers, Zijo Kubat, Esad Tucakovic, Refik Colak and Mevludin Selak, were sentenced to six years in prison for the killings in Kazani. Eight more former fighters were jailed for ten months for not reporting the crime and its perpetrator. Another man, Samir Bejtic, has been on trial for more than ten years for war crimes at Kazani.