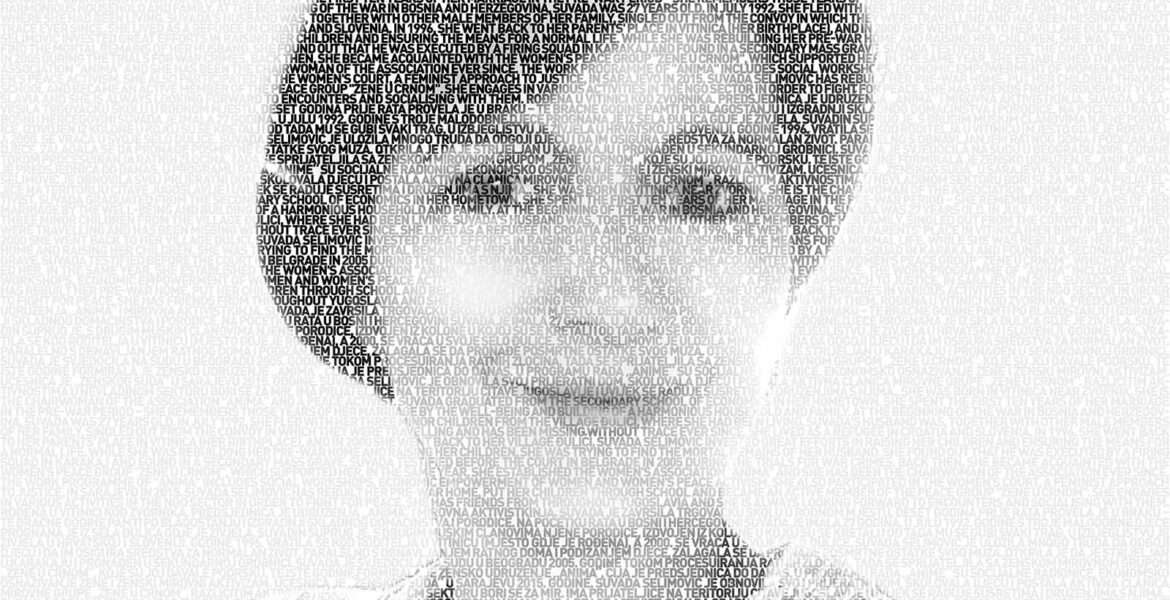 She was born in Vitinica near Zvornik. She is the chairwoman of the association “Anima” and a peace activist.

Suvada graduated from the secondary school of economics in her hometown. She spent the first ten years of her marriage in the pre-war period – she remembers those years of her marriage by the well-being and building of a harmonious household and family. At the beginning of the war in Bosnia and Herzegovina, Suvada was 27 years old. In July 1992, she fled with her three minor children from the village Đulići, where she had been living. Suvada’s husband was, together with other male members of her family, singled out from the convoy in which they were travelling and has been missing without trace ever since. She lived as a refugee in Croatia and Slovenia. In 1996, she went back to her parents’ place in Vitinica (her birthplace), and in 2000 she went back to her village Đulići. Suvada Selimović invested great efforts in raising her children and ensuring the means for a normal life. While she was rebuilding her pre-war home and raising her children, she was trying to find the mortal remains of her husband. She found out that he was executed by a firing squad in Karakaj and found in a secondary mass grave. Suvada testified before the court in Belgrade in 2005 during the trials for war crimes. Back then, she became acquainted with the women’s peace group “Žene u crnom”, which supported her. In the same year, she established the women’s association “Anima” and she has been the chairwoman of the association ever since. The work programme of “Anima” includes social workshops, economic empowerment of women and women’s peace activism. She also participated in the Women’s Court, a feminist approach to justice, in Sarajevo in 2015.

Suvada Selimović has rebuilt her pre-war home, put her children through school and became an active member of the peace group “Žene u crnom”. She engages in various activities in the NGO sector in order to fight for peace. She has friends from throughout former Yugoslavia and she is always looking forward to encounters and socialising with them.

“There are many women that still have not spoken up. It is important that all women speak up. We all need to go out and say openly what happened to us. If we did this, we would reconcile sooner, because we are victims, women who survived the war, and we know best what it was like to feel it on our skin. For this reason, we need to spread peace in order to avoid a new war. It is easy to be evil, to stir up a trouble, to introduce a bone of contention. Not everyone is the same. One cannot know what a person is like, unless one has spoken with the person. If one has not spoken with the person, one does not know him or her and cannot judge someone they do not know.”

“My life was a difficult and thorny path, but I do not feel like a victim. When I came back home, there was a hedge that had been planted by my hus-band. It already looked like a forest. Everything was over-grown. I cut it to the soil with the scissors I brought from Slovenia. The hedge started growing again, I cut it again, and it grew again. I am just like the hedge, the more you trample on me, the stronger I become. I also have scissors inside – and I use them to cut all the negative energy.”