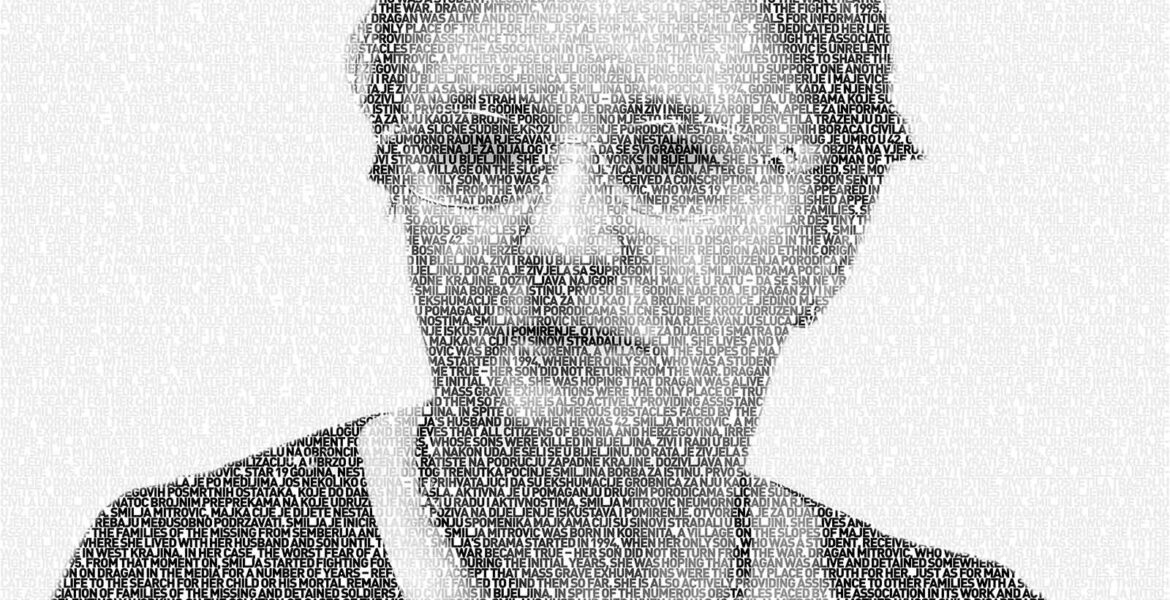 She lives and works in Bijeljina. She is the chairwoman of the Association of the Families of the Missing from Semberija and Majevica.

Smilja Mitrović was born in Korenita, a village on the slopes of Majevica mountain. After getting married, she moved to Bijeljina, where she lived with her husband and son until the war. Smilja’s drama started in 1994, when her only son, who was a student, received a conscription, and was soon sent to the war theatre in West Krajina. In her case, the worst fear of a mother in a war became true – her son did not return from the war. Dragan Mitrović, who was 19 years old, disappeared in the fights in 1995. From that moment on, Smilja started fighting for the truth. During the initial years, she was hoping that Dragan was alive and detained somewhere. She published appeals for information on Dragan in the media for a number of years – refusing to accept that mass grave exhumations were the only place of truth for her, just as for many other families. She dedicated her life to the search for her child or his mortal remains, but she failed to find them so far. She is also actively providing assistance to other families with a similar destiny through the Association of Families of the Missing and Detained Soldiers and Civilians in Bijeljina. In spite of the numerous obstacles faced by the Association in its work and activities, Smilja Mitrović is unrelentingly working on the solution of cases of the missing persons. Smilja’s husband died when he was 42.

Smilja Mitrović, a mother whose child disappeared in the war, invites others to share their experiences and reconcile. She is open for a dialogue and believes that all citizens of Bosnia and Herzegovina, irrespective of their religion and ethnic origin, should support one another. Smilja initiated the construction of a monument for mothers, whose sons were killed in Bijeljina.

“You have to be strong and protect your family, because the family is the pillar that protects women. Do fight and do not give up. Go further, do not stop. Mothers, unite – respect your child just as you respect other persons’ children! “

“It was difficult to stay alone. The relatives had to go back home, everyone had their own obligations, they could not sit with me. I had a mother, so that she stayed with me for a longer period of time. But when she eventually went home, I stayed alone. Just the fact that I looked at the door and knew that they were no longer alive scared me. I had the feeling that someone was knocking on the door. I guess that was fear. My sister called me and asked me what I was doing. I told her that I hadn’t slept, because someone was knocking on the door all night long. She listened to me and said: ”If someone is knocking on the door, you go to the door, open it and you will see that there is nobody. It will keep you up for a hundred years. Go to bed, sleep, forget about it! It will come when it is time.” And I say to myself: ”Why are you looking at the door, if someone wishes to come, they may do so.” And I no longer heard anyone knocking, I faced it. It was difficult for me. Even today, it is difficult to come back home, open the door, and I have nobody to talk to, nobody to tell what I heard, who I met.”