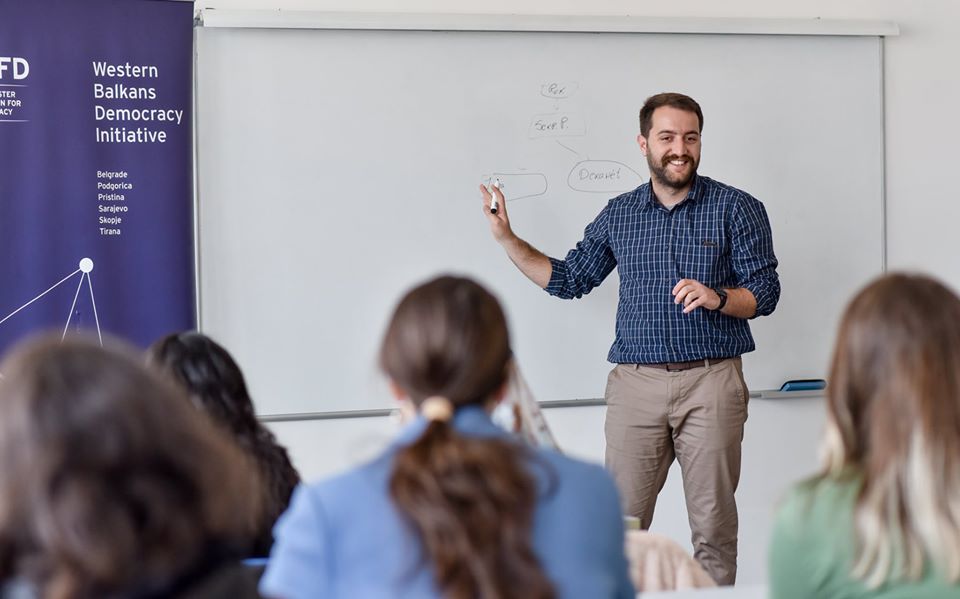 It is difficult to comment on interethnic relations in any society and doing so from a Balkan perspective is no exception. One reason for this is the complex historical context within which the countries of this peninsula exist. In each of the Balkan societies today, there is a great appetite for looking back at the distant past with fondness, to a time of our “great nations”. Of course, each Balkan society also sees their neighbours to be to blame for this ideal not being realized today. This leads us to the not so glorious recent past. Take Macedonia, which 11 years after an unremarkable exit from Yugoslavia, faced shocking events, specifically wars, conflicts and scandals between ethnic groups. People who had been living side by side, in parallel worlds, in this region for generations.

With these differing takes on history, at some point our society will need to face the consequences of its past actions and prejudices.

It’s worth mentioning here, that every Balkan country that took part in the recent wars and conflicts, has avoided fully investing in the one process that should already be well underway.I am talking about the process of transitional justice. There has not yet been a great will to start this process anywhere in the region. In North Macedonia, it has been almost 20 years since the internal conflict between two ethnic communities (Macedonian and Albanian) and to date, there has been no epilogue to this conflict. We have limited knowledge about what really happened. There has been no strategy on how to address or resolve the injustices of this conflict, instead it has been left to the people to freely interpret and draw conclusions.

Throughout this article, I will attempt to objectively present the big picture of the relations between the two most sensitive ethnic groups in North Macedonia.

A 2011 survey by the Macedonian Centre for International Cooperation, “Interethnic Relations in Macedonia”, uncovered an important result, one that still is being ignored in politics and media today: “Most people in this country believe that interethnic relations are beneficial for individuals (78.4%) and for the state of Macedonia (86.3%)”[1]. This result highlights there is the desire and willingness of citizens to get to know each other, to remove the obstacles to good relations that have been imposed for years, to strengthen communication and cooperation, and to enhance mutual trust and respect. To achieve this, however, the government needs to show a greater and more serious commitment to interethnic relations. Currently, the biggest promoters of interethnic values ​​in our society are civil society organizations, international organizations, and foreign foundations. The state does promote interethnic relations, but insufficiently. We should be ashamed of the fact that many young people only first start communicating with their peers from other ethnic communities around the ages of 15 to 20, and usually during trainings organized by civil society.

This implies that the education system is segregated and does not encourage enough communication between students and schools to teach an inclusive collective history of Macedonia. Instead, the approach of many primary school history teachers is to focus exclusively on teaching their own ethnic group’s history and skip the other lessons. This is happening in both dominant and minority communities. Having worked with schools across all ethnic communities, many see teaching collective history as unnecessary!

So, if we take the stated research as a reflection of current day North Macedonia, then prejudices and mistrust still exist between the different communities here. A basic positive would then be an apparent willingness to break down these prejudices and build stronger interethnic relations, which would also require a serious investment by all stakeholders. Young people largely inherit prejudices and beliefs from their parents as well as from online media, which drives division with its sensationalized and biased headlines. So, how can young people from different communities find opportunities to meet each other and challenge these prejudices, if not with the support of a state-led integration strategy, involving the state and local governments, our schools, and civil society? The strategy should include joint programs for education and cooperation, online campaigns for raising awareness, and various interactive activities to build interethnic relations. Otherwise we will hold on to our prejudices and mistrust for years to come.

Educational institutions are key. They should be encouraging critical thinking in students to challenge and eliminate prejudice and xenophobia among their peers. To reach the point where a generation of students is not divided by ethnicity, but rather, strengthened by it, requires a collective commitment by the state, municipalities, schools, parents, civil society and other institutions.

In North Macedonia, a positive example of this idea in practice is the partnership between high schools of predominantly different ethnic backgrounds and the creation of joint classrooms. Lessons are run in multiple languages ​​and are simultaneously taught to pupils from the participating schools. Students from partnered schools also jointly participate in extracurricular activities. Hopefully, this initiative will receive continued support and an increase in capacity building to include all schools in North Macedonia.

Over 50% of the population in North Macedonia uses social media. Unfortunately, some people take the opportunity, either with hidden or real user profiles, to use it to spread hate speech, post provocative maps and photographs, write xenophobic and derogatory comments, and incite other negative situations. Fortunately, social media also exposes young people to peacebuilding messages and articles, giving them a space where they can offer solutions to the problems and shortcomings that we have as a society. This space allows them to share positive stories of interethnic relations and alternative views on the distant and recent past, which can influence and raise public awareness, and showcase inclusive approaches to dealing with the past and current social divisions.

I recognize that tackling interethnic prejudice and mistrust in North Macedonia is a highly complex process that will take many years, however, avoiding the issues will only further impede dialogue and collaboration between our communities in the future. As research has shown, finding unity in our rich cultural diversity will benefit us, both as individuals and as an entire nation.