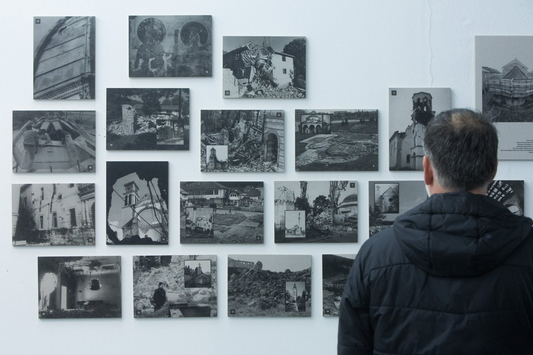 Inclusive memorialization is crucial for the future of the Western Balkans

For the future of the Western Balkans, it is important that atrocities committed during the wars of the 90s are jointly acknowledged and remembered. Such inclusive commemorations should serve as a counterbalance to the often one-sided and ethno-nationalist views and narratives created by the ruling political elite in Kosovo, Serbia, Croatia and Bosnia and Herzegovina. This is the main conclusion of a report by Peace organization PAX, mapping a number of Inclusive Memory Initiatives in the Western Balkans.

Simone Remijnse, PAX program manager of the Western Balkans: "The dominant narratives in many of the Western Balkan countries are often exclusively focused on suffering and loss within their own country or ethnic group, completely in line with the nationalistic agendas of the current political parties. There are projects and organizations who work with different groups and try to be inclusive, viewing the past from different angels. However, they experience increased pressure from nationalists. Initiatives on inclusive memorialization are systematically opposed by (local) government officials. This is why this way of remembering, with room for different stories about the war, hardly ever find their way to the broader public debate or education. This is why we argue for increased support for such inclusive memorialization alternatives."

The main obstacle encountered by many local organizations is the lack of government support. The political elite has an (ethno) nationalist agenda and is divisive. At the same time, in all Western Balkan countries, convicted war criminals who return home after they serve their prison time are glorified and treated as heroes. The report shows that there is a great need to decrease polarization and increase mutual understanding by supporting joint, inclusive and cross border memorialization initiatives.

Remijnse: "But the EU also has to hold countries accountable, for example Croatia, which is an EU member state, but plays a major role in sabotaging cooperation regarding commemorations and has a strong nationalistic view of the wars in the 90s. Besides, all Western Balkans countries should speak out against the glorification of war criminals and crimes. They should also protect civil society organisations and activists working on Inclusive Memory. They are the target of intimidation and even physical attacks by radical nationalists. More inclusive memory initiatives will contribute to a more balanced and inclusive dealing with the past. These issues should become a priority in the EU enlargement process in the Western Balkans."

The full report and the summary in Albanian and in BHS could be found on the following link: https://www.paxforpeace.nl/publications/all-publications/mapping-inclusive-memory-initiatives-in-the-western-balkans#