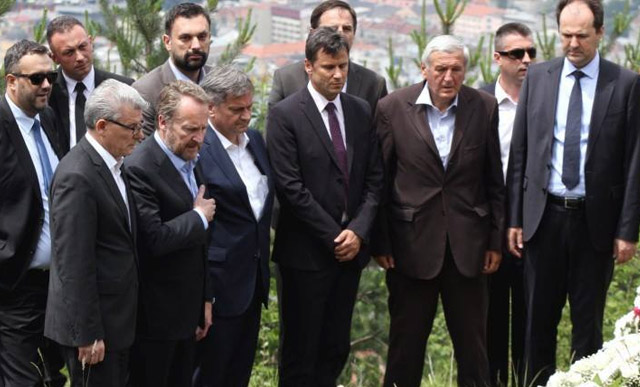 Chairman of the Presidency of BiH Bakir Izetbegović today laid flowers and paid tribute to the killed Serb civilians on Kazani above Sarajevo, for the sake of reconciliation and mutual respect.

“I had a feeling like I am obligated to express my reverence on Kazani and express condolences to families whose members lost their lives here, in a terrible way,” Izetbegović said, stating that he should have come to Kazani earlier.

Izetbegović stated that everything should be done so that such events never occur again, hoping that this visit will have “one positive political effect”.

Other politicians who joined Izetbegović today were Chairman of the Council of Ministers of BiH Denis Zvizdić, Chairman of the House of Representatives of the Parliamentary Assembly of BiH Šefik Džaferović, Prime Minister of FBiH Fadil Novalić and Prime Minister of the Sarajevo Canton Elmedin Konaković, as well as representatives of associations of families of the killed ones.

Officials expressed readiness to find mortal remains on Kazani given that the number of the killed persons was never officially determined. Remains of about 30 people were exhumed from the pit.

“Families of the killed are afraid that this might be an end on Kazani. That is why I asked Izetbegović to intervene and enable the search of Kazani. If there are no more remains in the pit, then he should order those who hid the bodies to tell us where they are hidden,” said the ČPresident of the Association of the families of the missing persons in the Sarajevo-Romanija region, Milan Mandić.

Mandić said that Izetbegović’s visit is an encouraging gesture which should be performed by other members of the Presidency of BiH, Dragan Čović and Mladen Ivanić.

“This is the place from where we should start building coexistence and future in Sarajevo,” Mandić said.

Fourteen soldiers of the Army of RBiH were convicted for crimes on Kazani. Their sentences range from ten months to six years in prison.