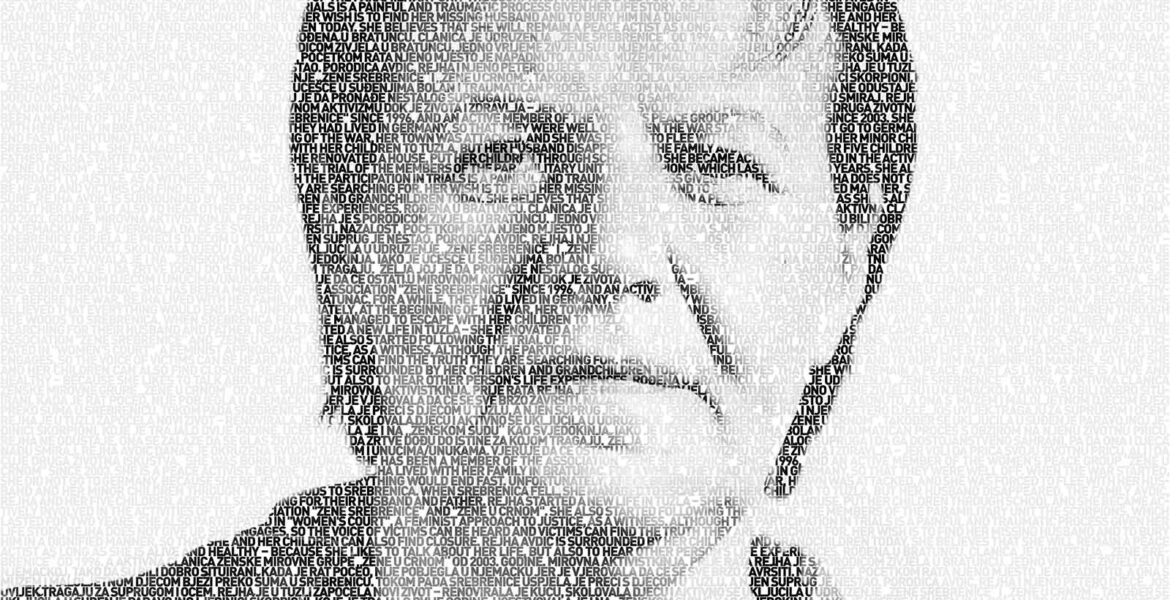 She was born in Bratunac. She has been a member of the association “Žene Srebrenice” since 1996, and an active member of the women’s peace group “Žene u crnom” since 2003. She is a peace activist. Before the war, Rejha lived with her family in Bratunac. For a while, they had lived in Germany, so that they were well off. When the war started, she did not go to Germany, because she believed that everything would end fast. Unfortunately, at the beginning of the war, her town was attacked, and she was forced to flee with her husband and her minor children through the woods to Srebrenica. When Srebrenica fell, she managed to escape with her children to Tuzla, but her husband disappeared. The family Avdić, Rejha and her five children, are still searching for their husband and father. Rejha started a new life in Tuzla – she renovated a house, put her children through school and she became actively involved in the activities of the association “Žene Srebrenice” and “Žene u crnom”. She also started following the trial of the members of the paramilitary unit the Scorpions, which lasted for two years. She also participated in “Women’s Court”, a feminist approach to justice, as a witness. Although the participation in trials is a painful and traumatic process given her life story, Rejha does not give up. She engages, so the voice of victims can be heard and victims can find the truth they are searching for. Her wish is to find her missing husband and to bury him in a dignified manner, so that she and her children can also find closure.Rejha Avdić is surrounded by her children and grandchildren today. She believes that she will remain a peace activist as long as she is alive and healthy – because she likes to talk about her life, but also to hear other person’s life experiences.

“You first have to listen to each other and understand. And then you have to go further, not stop and spread hatred, but rather love and peace. First, there has to be a basis – trust and understanding are the most important ones. You should never give up, you should fight. You have to move on!”

“This is a key to the house that I moved into in 1985 and left in 1992. My house was razed to the ground, but the key is still here. I keep it, it means so much to me. There is also a family photo that my husband’s cousin managed to save, I don’t know how. A photo of my husband, my daughters Sejdefa and Sabina and me.”