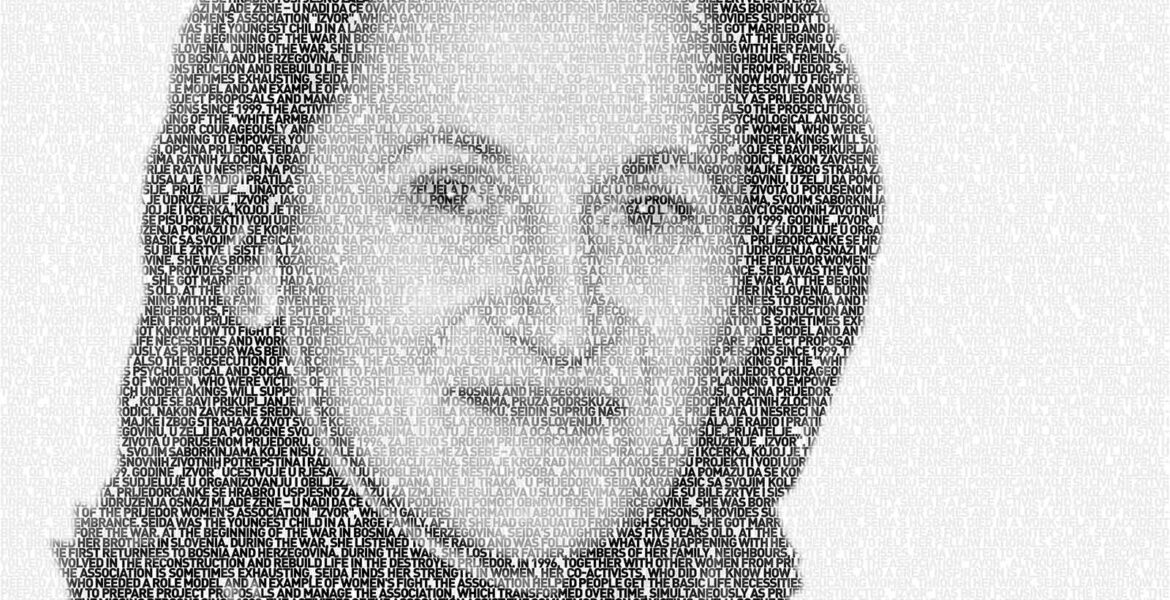 She was born in Kozaruša, Prijedor municipality. Seida is a peace activist and chairwoman of the Prijedor women’s association “Izvor”, which gathers information about the missing persons, provides support to victims and witnesses of war crimes and builds a culture of remembrance.

Seida was the youngest child in a large family. After she had graduated from high school, she got married and had a daughter. Seida’s husband died in a work-related accident before the war. At the beginning of the war in Bosnia and Herzegovina, Seida’s daughter was five years old. At the urging of her mother and out of fear for her daughter’s life, Seida joined her brother in Slovenia. During the war, she listened to the radio and was following what was happening with her family. Given her wish to help her fellow nationals, she was among the first returnees to Bosnia and Herzegovina. During the war, she lost her father, members of her family, neighbours, friends. In spite of the losses, Seida wanted to go back home, become involved in the reconstruction and rebuild life in the destroyed Prijedor. In 1996, together with other women from Prijedor, she established the association “Izvor”. Although the work at the association is sometimes exhausting, Seida finds her strength in women, her co-activists, who did not know how to fight for themselves, and a great inspiration is also her daughter, who needed a role model and an example of women’s fight. The association helped people get the basic life necessities and worked on educating women. Through her work, Seida learned how to prepare project proposals and manage the association, which transformed over time, simultaneously as Prijedor was being reconstructed. “Izvor” has been focusing on the issue of the missing persons since 1999. The activities of the association assist the commemoration of victims, but also the prosecution of war crimes. The association also participates in the organisation and marking of the “White Ribbon Day” in Prijedor.

Seida Karabašić and her colleagues provides psychological and social support to families who are civilian victims of war. The women from Prijedor courageously and successfully also advocate amendments to regulations in cases of women, who were victims of the system and law. Seida believes in women solidarity and is planning to empower young women through the activities of the association, hoping that such undertakings will support the reconstruction of Bosnia and Herzegovina.

“My message for young women is to get educated, but also to fight. Even uneducated women can fight for many things. We should not give up immediately, even if something is not achieved at our first attempt. We should be persistent, but we also have to cooperate with others, understand also other issues and support persons, who wish something else, although we ourselves maybe do not wish the same. We, women, when we fight, we fight for the rights of the whole family. And we can achieve much more!”

“This book is about 3175 innocent people from Prijedor, who were killed, but also a book about my father, who was killed in May 1992 during an attack against our town, Kozarac. That photo is his only remaining personal item. We had his ID card and we copied the photo from the ID and put it in the book. This is very important for me, because I dedicated my life and my work at the association ”Izvor” primarily to the issue of the missing and killed persons. The reason for this was the fact that I had the same experience myself, I knew how all families, who lost someone in the war, feel. My father was sick, he had had a stroke a year before the war started and he should have been no target for a bullet or grenade under any circumstances. The most difficult thing for me was the fact that we did not know where his bones were. The first time I went back to our town, the first occasion we could go to our destroyed house and town, I went from house to house, to places where he was seen the last time, to cellars and garden sheds in the yards of these houses, I was looking for the jacket in which my mother saw him for the last time. However, I found nothing. After we started cleaning our houses, we found out that he was killed there, and that one of our neighbours wrapped him in nylon and put him in a trench that had been made. He thus prevented animals from scattering his bones. This is how we finally had a grave and a place where we could go to and remember him.”