Home Contact About
Home ”The Constitution favours the status quo” 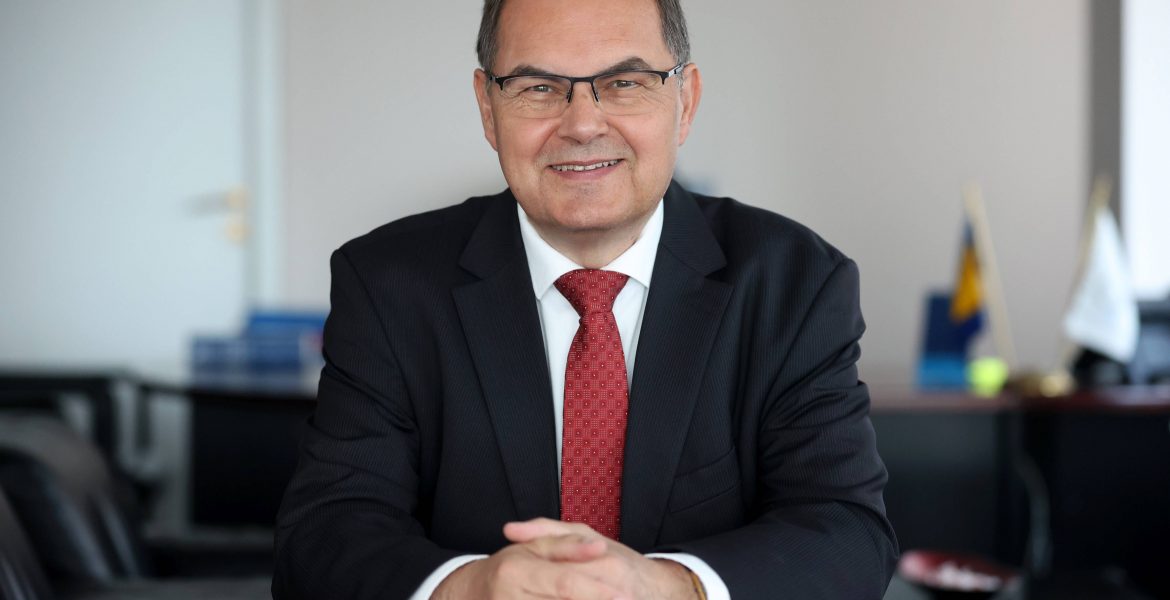 ”The Constitution favours the status quo”

The former German Minister of Agriculture, Christian Schmidt, has held the position of the High Representative for Bosnia and Herzegovina since August 2021. In this capacity, he supervises the compliance with the Dayton Peace Agreement that ended the war in 1995. We asked him about his opinion on the current situation in the country.

Mr Schmidt, what is the current situation when it comes to the Dayton Peace Agreement?

The agreement has proven to be an effective means for maintaining peace in the country. A series of checks and balances guarantee that none of the three ethnic groups, Bosniaks, Croats and Serbs, will become a minority. Unfortunately, these guarantees frequently produce the very opposite: Instead of facilitating decision making, they endanger progress. However, there are also shortcomings: those who do not belong to any of the ethnic groups or do not wish to declare themselves as belonging to one of the ethnic groups are insufficiently taken into account by the Dayton Constitution in political terms. The Constitution also favours the status quo and prevents reforms.

Shortly after you took up your duties, in a report to the United Nations, you wrote that Bosnia and Herzegovina  facing the greatest existential threat since the end of the war: the endeavours of Republika Srpska to secede would endanger peace and stability. What is your take on the country’s cohesion today?

In Republika Srpska, the secessionist rhetoric is still present and specific steps were taken in this direction, such as the creation of their own institutions, which I had to prevent by using the powers of my office. In Bosnia and Herzegovina, the three ethnic groups and the two parts of the country, the entities, have a strong identity of their own. A break-up of the country constitutes a violation of the Dayton Peace Agreement and harbours the risk of a renewed flare-up of violent conflict. The international community, the neighbouring countries in the region and the majority of population of Bosnia and Herzegovina are against this.

How can the civil society in your opinion contribute to the promotion of peace, facing the past and bringing about social change?

Positive developments are impossible in this field without the engagement of the civil society. Facing the past, and in particular the war and the crimes that were committed back then, is a highly emotional issue. It cannot simply be dealt with by the elected politicians. In fact, obstructions are frequently coming from politics. The commitment must therefore come from the core of the society and it has to be a long-term commitment.

How do you intend to strengthen the civil society in Bosnia and Herzegovina as the High Representative?

The cooperation with the civil society constitutes the basis for a sustainable development of the country. One of the concerns I have is the ability of the civil society to exert influence over matters that affect the country. Improving this is one of my long-term tasks. However, it is not something that I personally can achieve within the scope of my competences, it rather has to come from the society itself – with my support, of course. The colleagues from my office in Sarajevo are currently also working on the improvement of the process of reconciliation in the country with the involvement of the civil society.

Last year, your predecessor enacted amendments to the Criminal Code that criminalise the denial of war crimes, crimes against humanity and genocide, as well as the glorification of convicted war criminals. This is something that forumZFD has also advocated together with partner organisations for a long time. However, the impact so far has been small – for example, the new rules are hardly enforced by the judiciary. How can this be improved?

It will be necessary to carefully analyse whether the regulations adopted by Valentin Inzko [Schmidt’s predecessor in the office] are continuously ignored and blocked. I have always been of the opinion that it is actually within the competence of parliaments to adopt such laws and ensure their enforcement. This has not happened so far.

The education system in Bosnia and Herzegovina is still subject to segregation by ethnicity in many parts of the country. For example, there are still the so-called ”two schools under one roof”, where children attend lessons separately from each other, just as three different curricula. What reforms are needed in the education system, so that new generations can be taught diverse perspectives on the past and present?

I can only advocate working on overcoming divisions at schools and avoiding separate curricula. As a Member of Parliament, I was intensively involved in the German-Czech reconciliation and cooperation in the 1990s. Back then, an important element was a joint commission in charge of assessing textbooks that both sides could address and bring forward concerns. Without a joint effort to understand the different perspectives on the past, there will be no lasting reconciliation.

An exhibition entitled ”Peace with Women’s Face” is now being shown in Germany for the first time. In the framework of the exhibition, 20 women from all parts of the country tell their life stories. How can such role models contribute to facing the past and peace building?

I am glad about this initiative and believe that it should be widely disseminated. Persons engaging in such a strong manner in facing the past are extremely important, since they show that there does not have to be a continuous lack of trust and silence. Ensuring that people live together well in the long term will become possible only if persons openly discuss the past. This does not only apply to victims, but also to perpetrators. In addition to processing individuals that have been found guilty of crimes, another goal has to be to enable the affected persons to express their experiences.

This interview takes place shortly before the upcoming elections. What are your expectations and hopes for the October elections?

I expect the elected politicians to demonstrate that the trust that citizens placed in them has been justified. This includes, above all, a fast process of government building, as opposed to the past, when this was prevented by deliberate blockades. I will watch out for that.

Reconciliation is a crucial aspect of Bosnia and Herzegovina’s path towards the European Union. However, at the moment the political efforts invested in peaceful facing the past are insufficient. What is your opinion about the prospects for EU accession against this background?

There are numerous obstacles that must be overcome before joining the EU or even starting accession negotiations, especially when it comes to the rule of law and transparency. Peaceful facing the past will also be important in the further process. Nevertheless, I am in favour of making the advantages of EU accession and support more visible for the benefit of citizens. Otherwise, Bosnia and Herzegovina will not become an EU Member State; and instead young people will leave the country and go to the EU.

What would you like to achieve in your office as the High Representative?

I would like to contribute to overcoming many of the existing blockades that are currently preventing reforms, a dynamic development and reconciliation within the society. Once the relevant progress has been achieved in this field, we will be able to say ”mission accomplished”, when it comes to the task of the High Representative.

Thank you very much for the interview.

Hannah Sanders conducted the interview. The interview may be accessed at https://www.forumzfd.de/de/interview-schmidt