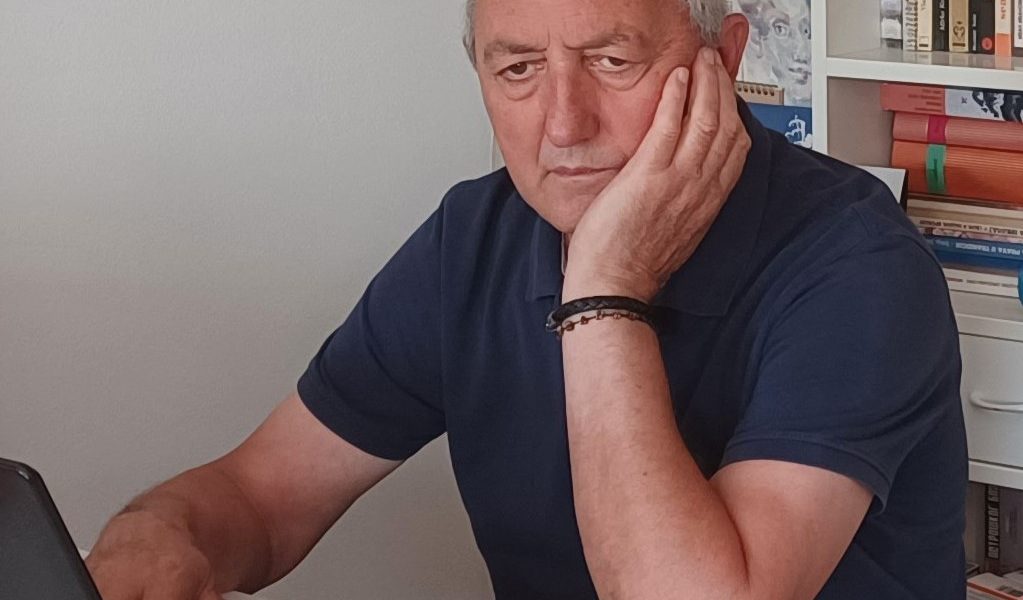 Thirty years of ethnic cleansing in and around Višegrad

Most of us who have lived far away from this small town know about Višegrad thanks to Ivo Andrić. I knew about it also because my close relative, from Sarajevo, got a job at a high school there after University. She grew up about twenty meters from the Eternal flame and I remember that she reluctantly left for Andrić’s town, where she soon felt quite at home, so much in fact that she was later reluctant to return to Sarajevo.

I had no idea that I would visit it several times in the last war. The town was mentioned in the mid-15th century, it is a place of legend and also the place where the most famous writer of former Yugoslavia, Nobel laureate Ivo Andrić, spent his childhood. Višegrad is certainly most famous for the bridge on the river Drina, the endowment of Mehmed-pasha Sokolović. It was built in the 16th century (1557) and was the pinnacle of architecture at the time, and even today it is quite a sight to behold, with its 11 impressive arches. It is one of the most important cultural and historical monuments of Bosnia and Herzegovina, included in the UNESCO list of world cultural heritage.

Something new has recently been planted atop the beautiful canyon of the Drina river and Višegrad – Andrićgrad. The people whose headquarters are in Belgrade, who are advocating for the Serbian world of Aleksandar Vulin and Aleksandar Vučić, visit this „kitsch city“as though they are visiting Kaaba. There are many lovely monuments in Višegrad, but apart from the bridge the most important are the monuments to Mehmed-pasha Sokolović and Ivo Andrić.

At the start of the last decade of the previous century, the municipality of Višegrad, once a peaceful multinational community in Eastern Bosnia became troubled. As one citizen of Višegrad before the Hague Tribunal put it: “turmoil began, interpersonal relations were disturbed” …

During the spring and summer of 1992, the military and the police of “Republika Srpska” committed mass atrocities against Bosniak civilians. According to the documents of the ICTY, around 1,600 people were killed in and around Višegrad, among them 600 women and 119 children. According to the ICTY, the city was subjected to one of the most extensive and ruthless ethnic cleansing campaigns during the war in Bosnia and Herzegovina, and according to the data of the Center for Research and Documentation 1,661 Bosniaks were killed in the genocide in this municipality. This was all done under the orders of Radovan Karadžić and Ratko Mladić long before the atrocity in Srebrenica.

According to the 1991 census, Višegrad had 21,199 inhabitants, 62.5% Bosniaks and 32.6% Serbs. Today, the city is part of Republika Srpska. During the ethnic cleansing, Bosniaks were killed every day on the Mehmed-pasha Sokolović bridge, and their bodies were thrown into the Drina. A large number of Bosniak men and women were arrested and detained at various locations throughout the city. Serbian soldiers raped women, terrorized civilians, looted and destroyed properties as well as mosques.

Bosniaks were taken to former YNA barracks in Uzamnica, some 5 kilometers outside of town, or they were held prisoner in the Vilina Vlas hotel, or some other buildings nearby. Women and young girls were kept in the Vilina Vlas hotel, and many of them were not older than 14. They were raped there by police officers and members of the White Eagles paramilitary group, and Arkan’s and Šešelj’s men.

On April 6th 1992, units of the pro-Serbian YNA, the Užice Corps, occupied Višegrad after only several days of fighting. After that they took over the city, which was declared a Serbian municipality on May 19th. The ruling Serbian Democratic Party declared Višegrad a “Serbian” city, and all non-Serbs lost their jobs. Then the killing began. On June 10th 1992, Milan Lukić came to the Varda factory and arrested seven Bosniak men. He then took them to the Drina river, placed them in a single file and shot them, before the eyes of many witnesses, including the wife and daughter of one of the victims, Ibrišim Memišević.

On June 14th 1992, a group of 70 Bosniak civilians, mostly from the village of Koritnik, were detained at the Omeragić house in Pionirska Street. Some of the women were taken out and raped before being returned to the house. A bomb was thrown into the house and then the house was set on fire. Fifity-nine people were killed (53 according to the Tribunal). Only a few survived, and all of them testified in The Hague at the Lukić trial. The oldest victim was 75 years old, and the youngest (the baby of Senad Kurspahić) was only two days old.

On June 27th around 70 Bosniak civilians were held in one room in a house in Bikavac, near the city. After robbing the prisoners, the house was set on fire and everyone died. Zehra Turjačanin testified before the Tribunal about this case.

Milan and his cousin Sredoje Lukić were tried in The Hague in a joint trial, and their accomplice Mitar Vasiljević was tried separately. Vasiljević was sentenced to 20 years in prison, which was later reduced by a decision of the Appeals Chamber.

A witness in the Lukić trial, Mevsud Poljo, stated that in June 1992 his group pulled out some 180 bodies, of which he recognized about 50.

The monster of Višegrad, Milan Lukic grew up surrounded by Muslims. His first teacher was a Muslim, his first girlfriends were Muslim… In the Hague, he stated that he was a “born fighter” and that throughout his life he “always advocated for truth and justice.” My only struggle now is to uncover the real truth about the crimes committed in Višegrad against the innocent Muslim people, said the mass murderer.

Twenty years after the crimes were committed, a verdict was passed in the Lukić-Lukić case. Milan was found guilty of killing at least 132 Muslims, and the arson in Pionirska Street and Bikavac were proclaimed “the worst examples of inhuman treatment by man. In the history of human inhumanity, which is too long, sad and awful, the arson in Pionirska Street and Bikavac undoubtedly occupy a very high position,” said the judge of the Tribunal.

Milan Lukić was found guilty of crimes against humanity, extermination and violation of the laws and customs of war and sentenced to life imprisonment. Sredoje Lukić was also found guilty and was sentenced to thirty years in prison. Milan’s verdict was upheld on appeal, and Sredoje’s prison sentence was reduced by three years.

The War Crimes Chamber of the Court of Bosnia and Herzegovina sentenced eight individuals for crimes against humanity in Višegrad, of which four on charges involving sexual violence: Oliver Krsmanović to 18 years, Momir Savić (17), Željko Lelek (16), Boban Šimšić (14), Dragan Šekarić (14) and Nenad Tanasković to eight years in prison.

I don’t know if people still sing the song U lijepom starom gradu Višegradu (In the beautiful old town of Višegrad), written in 1936 by Dragiša Nedović from Kragujevac, and sung for the first time during the 1950s by Himzo Polovina.

I wonder if I will ever visit that town again. For the sake of memory, here are a few lyrics:

“In the beautiful old town of Višegrad

where the Drina runs deep for centuries

I am left with only a sad memory

when I loved my darling almost every night.

In the early morning I listen to the nightingale song

from Bikavac, the hill of Višegrad, wake up my darling

my blooming rose, the sun is rising on the sparkling Drina…”

I am ashamed, even though I did nothing wrong. I must repeat – 30 years ago 62.5% of Muslims/Bosniaks lived in Višegrad, and now less than 1%.

I keep hearing the words of Huso Kurspahić, who had been, as he told the Hague investigators, a “professional policeman” for twenty years before the war in Bosnia and Herzegovina. For Huso this was the most beautiful town in the world. This witness before the Tribunal in the Lukić-Lukić and Vasiljević trial, said that the criminals would still be “free to do what they wanted” if it hadn’t been for the International Court of Justice.

Dragan Banjac, journalist from Belgrade. He spent twenty-five years in Borba (correspondent from Dubrovnik and the Herzegovinian hinterland), and after the paper was shut down, he remained in Borba, and later in Naša Borba. He reported from the Herzegovina-Dubrovnik battlefield for a year, and after returning to Belgrade, he worked in the internal political newsroom, where he was also the editor. He is the first journalist to enter besieged Sarajevo, Mostar and Tuzla during the war in Bosnia and Herzegovina (via Hungary and Italy). He also reported from the battlefield in Slavonija, and later from Kosovo.

After Naša Borba was shut down by the regime, he worked as a corespondent for the Sarajevo news agency ONASA, the Podgorica newspapers – Publika, Vijesti and Pobjeda, he also wrote for Monitor, he worked for less than a year in Blic (Regions editor), was deputy editor-in-chief of Glas javnosti, correspondent for the Tagens Zeitung from Zurich, Oslobodjenje, Radio Sarajevo, Federal Television… and for the newspaper Republika (until it shut down in 2015). He writes comments for the Aljazeera Balkans portal. A year ago, he launched Forum, a portal for the citizens of Serbia. He is both the owner of Forum and the editor-in-chief.