Home Contact About
Home Filjana Koka: Emotions Remain in the Conflict Field, We Follow the Profession’s Call for Ethical and Professional Reporting 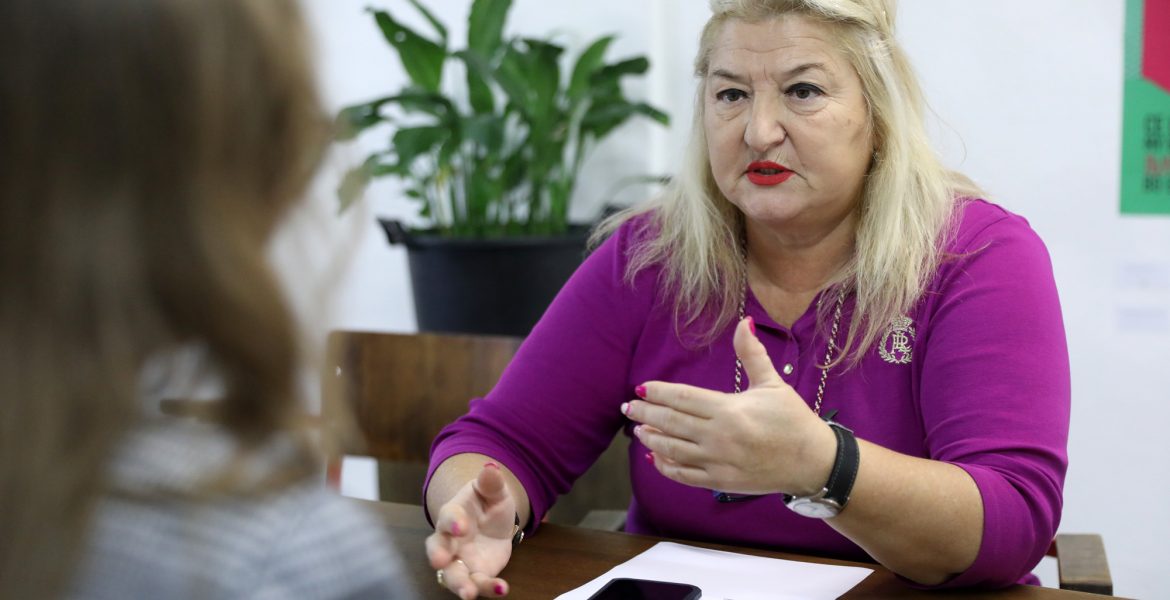 Filjana Koka: Emotions Remain in the Conflict Field, We Follow the Profession’s Call for Ethical and Professional Reporting

Journalists bear a huge social responsibility. In addition to reporting, they also contribute to “establishing the permanent peace.” Therefore, whatever they feel in the area of the conflict, they should “leave it” aside, and refer exclusively to the call of the profession for ethical and professional reporting, both during the conflict and after it ends. This is especially important if the journalist is returning to an interethnic environment, in which citizens from two countries that once had a conflict, now live. Journalist Filjana Koka says “that is very difficult” but that emotions must remain in the conflict field, for the sake of building a peace bridge through professional and ethical reporting.

Filjana Koka is a long-time journalist who works for the state TV station, MTV. She is Vice President of the Association of Journalists of Macedonia (AJM). She is a reputable journalist who has reported on the armed conflict in the town of Tetovo, which began in 2001 when the Albanian armed group, the National Liberation Army (NLA), attacked the security forces of North Macedonia, and on inter-ethnic conflicts in North Macedonia before that.

What emotions do journalists face when reporting from a conflict area?

Conflict areas are, in themselves, stressful for journalists. All the senses are tense, and the emotional response depends on their previous readiness to face such situations, primarily the experience they have and of course, their personality. When you go to such an area, you’re on a dangerous, unknown, and alien terrain. No one guarantees you anything there. So, you face the fear of danger even for life. Whether it’s a war zone or it’s an ordinary peaceful protest, the feeling is similar. Of course, you are much more at risk for your life when weapons rattle. However, journalists are exposed to intense psychophysical pressure on the one hand to see everything, to investigate everything, and to pass on to the audience prompt, accurate information, yet, impartially, objectively, and professionally, and on the other hand to preserve a living head, even if seemingly in a safe place while reporting. Additionally, their emotions are burdened by what they see in the field, whether they are injured, wounded, or – God forbid – killed. Or they hear aircraft, helicopters, gunfire, and explosions, all of which leave permanent traces on the psyche and mental conditioning of journalists. Statistics show many cases when colleagues who reported from such areas after returning from there had to undergo long-term treatments with psychologists, sociologists, and other professionals to return to everyday life and at least to a solid psychophysical state. But there are those who have not done so and remain forever in poor health. For the others, what were their reasons for not doing it, rarely anyone wants to talk, and that is perhaps the worst.

How difficult is it for a journalist to leave those emotions in the conflict field, and return to professional reporting in an interethnic environment, such as North Macedonia?

It is the hardest. But the sooner one overcomes oneself and rises above one’s belonging – be it religious, ethnic, etc., – the sooner the negative feeling and the inner image that the journalist has drawn by identifying with those to whom they affiliate will be overcome, and the quicker they will devote themselves to the calling of the profession, to report according to ethical norms and professional standards. Only by a professional approach to reporting can one contribute to not blindly serving the ethnic communities to which journalists belong, but only contribute to the truth and the public good, which implies the promotion of democratic processes, not the return of unilateral or prejudiced texts. Journalists must in no case fall under the influence of the emotional connection they have with a particular community, but on the contrary, to be its first corrector if they wish progress, and that is to report all harmful phenomena equally independently of who belongs to whom because that affiliation is irrelevant to the real democratic progress of society as a whole.

You reported on conflict situations of an inter-ethnic nature. What was the cooperation between journalists on both sides, and did you manage from that period to today to build a bridge of peace journalism?

I have reported from conflict areas in our country, and I can say that the restoration of trust has always been difficult. One can still feel like we’re all buried in our trenches and moving toward someone else’s trench, if I may say so. There are examples of individuals who are bolder, but such number is still small in terms of how much it should be. Of course, the bridge could not be built immediately, but I believe that although it may not have been completed, it still has the foundations, it has the structure and it only needs to be upgraded. The younger generation of journalists needs to be motivated and directed to overcome possible barriers between them, to remove all attempts and efforts of certain centres of power to use their positions so that they cannot achieve their goal which should be the sole purpose for them, and that is to make visible all deviant phenomena in society, such as corruption, organized crime and other phenomena that are present everywhere.

Sensitive reporting on a national basis

In a society such as the Macedonian one where, despite the prevailing co-existence between people of different nationalities, it is unfortunately easy to raise tensions, journalists are important stakeholders in building stability and peace, and as such, they play a pivotal role.

However, in the Republic of North Macedonia, there are certain media outlets that use headlines that emphasize nationality.

“Albanian and Macedonian pupils got into a fight,” one of the examples read.

Koka says these examples are bad because they run counter to the journalistic code of ethics and the principles outlined in the code, which apply to every professional.

In everyday journalism, we have individual examples where the media informs us with examples such as, “Albanians and Macedonians got into a fight”, instead of being “minors, students, or persons”. Why is such reporting wrong, i.e., what can it cause?

Such reporting is wrong because it is in contradiction with the code of ethics of journalists and the principles outlined in the code that applies to every professional. Reporting in violation of the provisions of the code may not be for the benefit of the public or the public good, which is at the same time the first and fundamental duty of journalists. The ethnicity of participants in fights, criminal acts, unlawful acts, etc., must not defocus the public who deals with the ethnicity of the stakeholders will not deal with how harmful the occurrences of violence, hatred, etc. are, regardless of affiliation. On the contrary, the perpetrators of those acts and their motives, and who and what is behind them, should be guided by the purpose of reporting and not from which affiliation they are. Defocusing in the sense of fuelling interethnic intolerance, for example, benefits certain powerful people, businesses, political or otherwise in order to achieve their goals, journalists should never be at the service of these goals of theirs, but to the public.

What is your advice with regard to this?

“In performing his/her profession, a journalist should adhere to respect for ethnic, cultural, and religious diversity. In doing so, strictly to strive for reporting, to care for respect for human rights or freedoms, it is important that even while dreaming he does not speak with the language of hatred. It is unacceptable for the journalist to incite violence and discrimination on any grounds (national, religious, racial, gender, social, linguistic, sexual orientation, political), something which is clearly outlined in the code. Why is it important to always respect generally accepted social standards? Simply because the public interest is the number one priority for this profession. If the journalist follows them zealously, he/she will never stigmatize or favour one at the expense of other citizens in the country, who, in turn, enjoy the same rights and the same obligations. The recipe is simple, it is reported in the public interest and not in the interest of individuals, or groups of certain centres of power.