Home Contact About
Home The Balkans and culture of remembrance: Murderers as model citizens 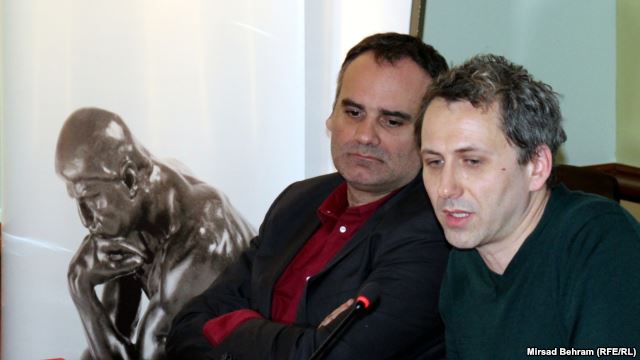 The Balkans and culture of remembrance: Murderers as model citizens

The renowned film and theatre director from Sarajevo, Dino Mustafić, believes that the very term culture of remembrance implies developing a culture of compassion. The societies of the region, however, are very far from it.

"Unfortunately, I have to say that we live in a society in which remembrance is all too filtered; it passes through a socio-political discourse and we mostly remember those dates, events or facts that make ‘our’ people a victim, and we refuse to remember or commemorate those dates, years and facts in which certain groups experienced a moral and civilizational fall", said Mustafić.

Oliver Frljić, the renowned theatre director, reminds that in Croatia various documents were adopted for the purpose of forcing the society to erase certain matters from their memory.

"In this respect, I very frequently refer to the Declaration on the War of Independence, which states that the war lead by Croatia was exclusively a defence war. The inhabitants of Mostar probably know this best, to what extent it was a defence war, what a state was doing on the territory of another state, destroying its cultural monuments and opening concentration camps at the end of 20th century", said Frljić.

A lot could be done by means of art, directors say, but works dealing with the topic of facing the past are not really welcomed with an applause. Oliver Frljić also gives an example when he was doing a play about Srebrenica in Subotica. "It seemed to me at the moment that it was the right way for the Serbian society to face the responsibility for that tragedy. This also caused a series of reactions. I was repeatedly accused that my plays were pamphletistic", says Frljić.

"I mean, what kind of culture of remembrance are we talking about when convicted war criminals are again the main TV stars? They are permanently on TV, they publish their books, promote these books, comment political and social events, they comment rulings of the Hague Tribunal. This does not happen anywhere else. It is insane. This does not exist anywhere else", emphasized the director Dino Mustafić while speaking during a gathering about the culture of remembrance held in Mostar.

Societies of former Yugoslavian states are divided into ‘we’ and ‘they’, so that it happens that war criminals are rehabilitated instead of being prohibited from performing important functions.

"Vesna Pešić wrote several days ago a text in which she stated that many war criminals were again on the lists for local elections and the recent elections in Serbia. This has already happened before, but I expect that this will also happen in our country", said Dino Mustafić.

A former journalist and editor of the political magazine "Dani" from Sarajevo,  Senad Pećanin, says that instead of a culture of multi-ethnicity we have a dictatorship of nationalism, and this is the reason why societies from this region are in such a state.

The culture of remembrance is important as a catharsis, if we wish well to our children, say artists and analysts and ask whether we will leave the world of murderers, who can again become role model citizens, as a legacy to our children.