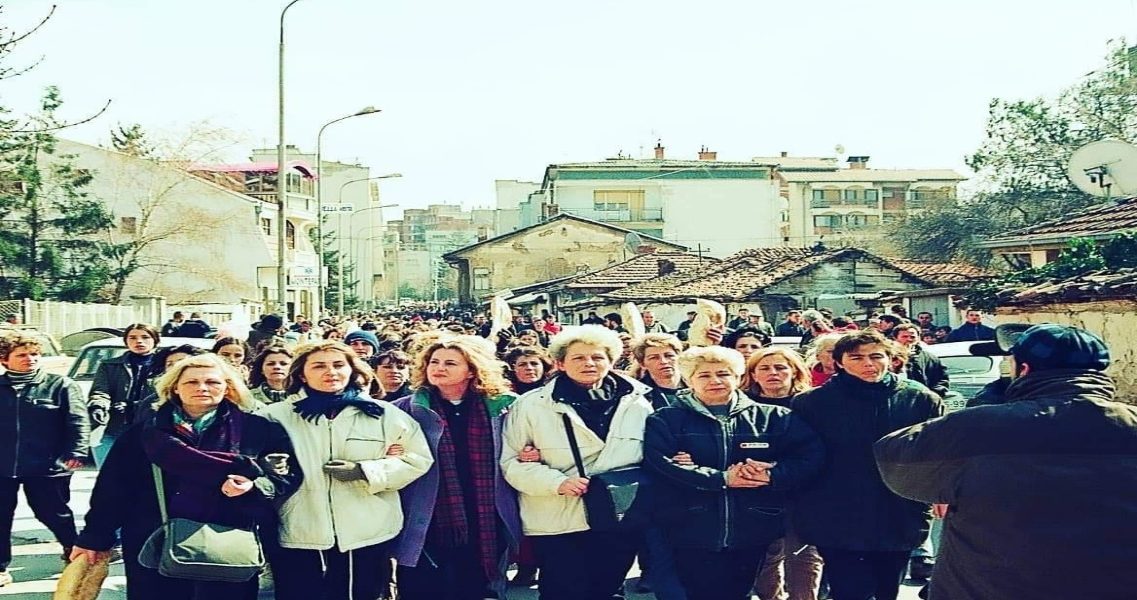 The Fulfilment of a Dream through activism and call for peace

In this interview Dafina Lata talks to Edita Tahiri, who was part of delegation at the Peace Conference in Rambouillet and Chief Negotiator of the normalization dialogue with Serbia in Brussels from 2011 to 2017.

Ms. Tahiri, we will first speak about times in the ‘90s. How do you recall that time?

Tahiri: The 1990s were a difficult time for the Albanian people of Kosovo. Through military occupation, Serbia aimed to prevent Kosovo from exercising its right to self-determination, freedom, and independence of the people of Kosovo and other federal units (including Croatia, Slovenia, Bosnia and Herzegovina, Montenegro, and Macedonia), in the framework of the processes that dissolved former Yugoslavia.

In this context, I become one of the founders and leaders of the Movement for Freedom and Independence. I fought for freedom and independence with my national ideals. I knew no fear or difficulty because I was decided not to back down at any moment from the road to freedom. My goal was to ensure that my people would never again experience violence, trauma, and atrocities, they had to go through during this time. Therefore, I often mention that we fought the war for a century for freedom and independence so that the young generations would not forget the difficult history of the freedom of Kosovo.

“The regime of Milošević, exercised state terror, murdered thousands of people, Albanians, women, girls, children and elderly, including the raping of over 20,000 women during the war.”

How difficult was it for you, as a woman, to face the events of that time?

Tahiri: Weorganized a people-wide resistance against the occupation by Serbia – we were decided and unwavering, we were ready to die for freedom. The people-wide movement for freedom and independence, known as the peaceful resistance, was led by the Kosovo Democratic League (LDK). It resisted for almost a decade by putting in place a parallel state organization and a diplomatic process with the world to internationalize the issue of Kosovo, which brought the establishment of the alliance with the USA. In the last two years, the military resistance led by the Kosovo Liberation Army appeared. Both types of resistance: the LDK and the KLA wrote the history of the liberation and independence of Kosovo, which we enjoy now since 1999 with the support of the USA and NATO that bombed Serbia.

“To me, it was a special and proud task to lead and serve the Albanian people, who refused to submit to the Serbian aggression, under any circumstance, despite facing murder, tortures, amongst other atrocities”

Being a vocal woman, how did you manage to face the stigmatization at that time, which unfortunately continues to be part of the society?

We were very much united around the national ideals, so there was no space for gender differences. Our fight was against the occupiers. However, I was the only woman in a leadership position of 15 men of the Movement for Freedom and Peace (LDK), led by President Rugova. I was respected and heard, I never noticed at any moment any gender differences throughout the years. Although the majority were men, I, as a woman, was entrusted with diplomacy. I was the Foreign Affairs Minister of Kosovo between 1989-1999, where my diplomatic role was to make international the issue of Kosovo and to persuade the Western allies, in particular America, to support Kosovo on its road to freedom and independence, something that we achieved.

When we speak about the ‘90s, how difficult was it for you to get active in Kosovo?

Tahiri: My dream was the freedom and independence for Kosovo. The goal to make that dream a reality is a force that keeps you moving in the face of many challenges. It does not let you give up, especially if your people are to be killed, then you are constantly searching for a way out, to make as much as you can for your own people. To help them, encourage them and take from the people. It is also important to highlight that my father had been in prisons because of his fight for the national unification of Kosovo and Albania. I was bred with that patriotism and receiving an education in the West and learning English at that time gave me sufficient knowledge and contribute to the freedom and establishment of the Kosovo state that today we all enjoy.

Was the voice of women in decision-making position heard during the 1990s, and do you think that women had an equal role with men in state-forming of Kosovo?

Tahiri: It is worth emphasizing that women have played an extraordinary role in the Movement for Freedom and Independence, and in the peaceful and armed movement. Also, the women of Diaspora have given their contribution because the Diaspora was a strong arm of the people of Kosovo in their path towards freedom and independence.

You did not stop even after the war, you continued your contribution all the way to the establishment of the state of Kosovo, and you are continuing to this day. You were the Deputy Prime Minister, a Minister of Foreign Affairs, and then Chief Negotiator in the Kosovo – Serbia talks in Brussels. From these positions that you have held, what was an event that made you feel prouder of yourself?

Tahiri: Thehistorical event for me is the participation in the Kosovo delegation at the Peace Conference in Rambouillet, which opened the path for freedom, stopped the war in Kosovo and the mass atrocities against Albanians. It left the door open for the Kosovo independence and prompted the bombing of Serbia by the USA and NATO forces.

During the Kosovo-Serbia talks, given that men mainly dominated at the talks table, how difficult was it for you as a woman to face all those talks, which were not easy?

Tahiri: As the Chief Negotiator at the Brussels Dialogue, it was not difficult for me as I had considerable experience, especially through my experience at the Rambouillet negotiations. In my opinion, the peace negotiations that define transition from war to peace are very difficult, because they take place under emotional pressure. On one hand, you have a people at war, and on the other hand, you must take a fair decision, so the war ends but the dream of freedom and independence is defended.

The Brussels Dialogue, namely the post-war negotiations are therefore easier. The people are in peace and you are a winner. In Brussels, Kosovo had the position of the winner of the war against Serbia. That is the position I held during the talks in Brussels, I reminded them of the violent history against us, while defending the state and national interests. The main success is that through the Brussels agreements we expanded the sovereignty of Kosovo in the northern part, and I did not allow at all Serbia’s tendency for division.

“The dialogue is at its final stage, the mutual recognition must be achieved through a final agreement. The Government should form a team of unity because the major topics are national and state ones, and the talks can and should be successful.”

What is your message to the women who seek to be independent?

Tahiri: I think that our fight for gender equality should be won by imposing a 50% quota for women’s participation in the central and local level government. By dividing the power equally, nobody can remove women from the table where decisions are made for the future and development. Also, we should work to transform the society towards a democratic mentality and to be released from patriarchy.