Home Contact About
Home The Ministry of Defense Revisionist Reader 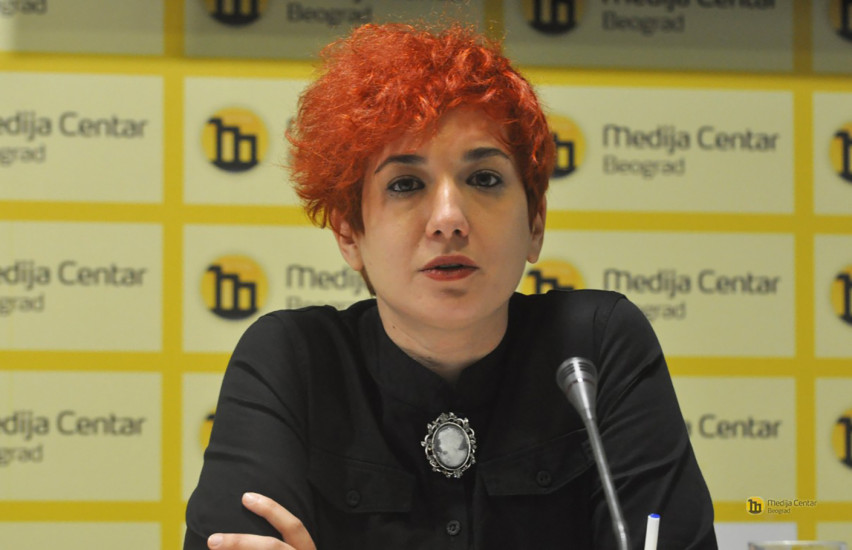 The Ministry of Defense Revisionist Reader

In March 2020, when the President of Serbia declared a state of emergency and, listing various “difficult moments for our country”, mentioned Srebrenica, it wasn’t really clear what an act of genocide committed 25 years ago has to do with the coronavirus pandemic.

The truth is – there is nothing connecting the two events.

Actually, the founder of Srebrenica as a “difficult moment for our country” was Defense Minister Vulin, and that “moment” has nothing to do with neither the genocide nor its acknowledgment. It in fact refers to an incident that happened in July 2015, when Aleksandar Vučić was hit in the head with a stone during a commemoration in Potočari. Thanks to the Defense Ministry, this is what Srebrenica has come to mean.

The Ministry of Defense, led by Aleksandar Vulin as its chief analyst, holds an important place in our interpretation of political reality. The Ministry’s webpage looks like a notice board where the Minister Vulin comments on everything: on elections in Serbia and other countries in the region, on EU integration, negotiations with Kosovo, on each and every media article critical of Serbia or its Supreme Military Commander – in short, on everything.

The Ministry of Defense has, therefore, become key to understanding daily politics.

In addition to analysis of contemporary political events, the Ministry of Defense also commits considerable attention, and budgetary means, to interpreting our past, writing down a new (or rehabilitating an old) official history of the recent wars – on the Ministry’s webpage, in official publications, and even through its own publishing and filmmaking efforts.

The project that began in 2015, when the previous Defense Minister organized an airport welcome for the general Vladimir Lazarević as he was returning from prison for war crimes, was further outlined by Vulin’s remark about a time of “silent pride”. This is the core of the new politics of remembrance – a “time“ when we have nothing to be ashamed of, not even of the crimes that were committed, and certainly not of those who have been convicted for them. These politics have been further materialized through the Ministry’s publications and through the output of the Military Film Center: through both documentary and fiction films about wartime victories, through printing of memoirs, wartime journals, notes and diaries of officers convicted of war crimes.

All Ministry’s publications, from the website and the magazine “Odbrana” (Defense), to its publishing and filmmaking outlets, serve to create a revisionist platform meant to solidify the myth of liberation wars, or wars that the country was forced into. The rehabilitation of war criminals has become an everyday (fighting) task.

The focus was initially on Kosovo. An imprint called “Ratnik” (Warrior) was founded, which published the wartime journal of the commander of Yugoslavia’s Third Army, colonel general Nebojša Pavković, who is currently serving a prison sentence for crimes committed in Kosovo. The same imprint saw the book „Prištinski korpus 1998–1999 – svedočenja ratnih komandanata“ (The Pristina Corps 1998-1999 – Testimonies of Commanders), which includes the memories of the Pristina Crops commander, colonel general Vladimir Lazarević, who has since served his prison time. The events at Košari and Paštrik also got their own publications, followed by movies coproduced by the Military Film Center “Zastava Film”.

This extrajudicial rehabilitation through publishing was entrusted by the Ministry to Miroslav Toholj, the wartime Minister of Information of Republika Srpska, who was named director of the Publishing Department of the “Odbrana” Media Center. Toholj’s background includes working as an editor in his wife’s publishing house, which published books by convicted war criminals Radovan Karadžić and Vinko Pandurović, but also Toholj’s correspondence with Karadžić while the latter was on the run, and even Minister Vulin’s novel “Mrak” (Darkness).

In the October issue of “Odbrana”, Miroslav Toholj announces new “Odbrana” publications. The first book by the new imprint “Svedok” (Witness) will be “Zrno rata” (The Pebble of War) by Dragan Vujičić, a journalist working for “Večernje novosti” known for“Srebrenički krug” (Srebrenica Circle), a book predictably committed to genocide denial.

On the other hand, the “Ratnik” imprint will be enriched by a book written by the recently deceased Chief of Staff of the Army of Yugoslavia Dragoljub Ojdanić, „Režiranje humanitarne katastrofe – Privremen odlazak Albanaca s Kosova i Metohije“ (Engineering a Humanitarian Disaster – The Temporary Exodus of Albanians from Kosovo and Metohija).

The Serbian public learned of Ojdanić’s death from an official notice by the Ministry of Defense. On the Ministry’s webpage, we could find out all about his schooling, his posts and medals, but nothing whatsoever about the judgment passed by the International Criminal Tribunal for the Former Yugoslavia that sentenced him to 15 years in prison for crimes committed in Kosovo. We could not even find that there was a judgment.

Following the prolonged effort to establish the recent wars as highlights of our history, and the oficers charged for war crimes as wise, decisive and unwavering military strategists, war chroniclers, and post-war analysts and lecturers, came the time to reestablish the politics which fueled the wars themselves.

For the first time this year, The Ministry of Defense marked the anniversary of the death of the former Minister of Defense of SR Yugoslavia, Pavle Bulatović, and the delegation of the Ministry, lead by Minister Vulin, laid a wreath on his grave in Montenegro. Pavle Bulatović was an important figure in the political life of the 90s, and he held leading positions in police and military structures of the country. Recalling the “life and death of a man who lived for the common country of Serbia and Montenegro”, Minister Vulin left out the fact that in early 1994 as Minister of Defense in SRY, Pavle Bulatović was in charge of coordinating the arrest and forced return of Serbian refugees from Croatia and Bosnia and Herzegovina to the warzone, and in Montenegro before that he was serving as Minister of the Interior, while the police there was arresting Bosniaks from Bosnia and Herzegovina and deporting them to the army of Bosnian Serbs. That part of Pavle Bulatović’s Ministry is not considered relevant.

The political work done by the Ministry of Defense is determined by the political orientation of the current authorities, and the primary goal of the Ministry’s revisionist hyperproduction is to solidify the narrative of the wars in the 1990s, and to exclude any notion of accepting Serbia’s responsibility. In addition, this revisionist interpretation of Serbia’s part in the war functions as a framework for social justificiation of increased armament and the expenditure of considerable budgetary means during an economic crisis. The past is therefore used as precaution – if we are not ready and armed, it will repeat itself. So armament becomes national interest, and whoever tries to question the justification of its cost will automatically be labeled an adversary to national interests.

Although the current authorities are nominally committed to “strengthening the relationships and cooperation in the region”, the basic tenet of Serbian political elite boils down to reinforcing the national identity, whether through the construction of a stadium or reinterpreting Serbia’s role in historical events. In order to create a new cohesive nation, they engage in reinvigorating the myths of Slobodan Milošević – the ones about defensive wars, forces wars from which we emerged proud, about heroic struggles of small nations against the world’s greatest powers, about one country for all Serbian people etc. In order for the nation and its narrative to persevere we need decisive, heroic battles, determined leadership and, of course, justified victims, dates and faces around which our identity is to be constructed. Košare becomes this government’s Gazimestan, and the President of the Republic of Serbia becomes the President of all Serbs.