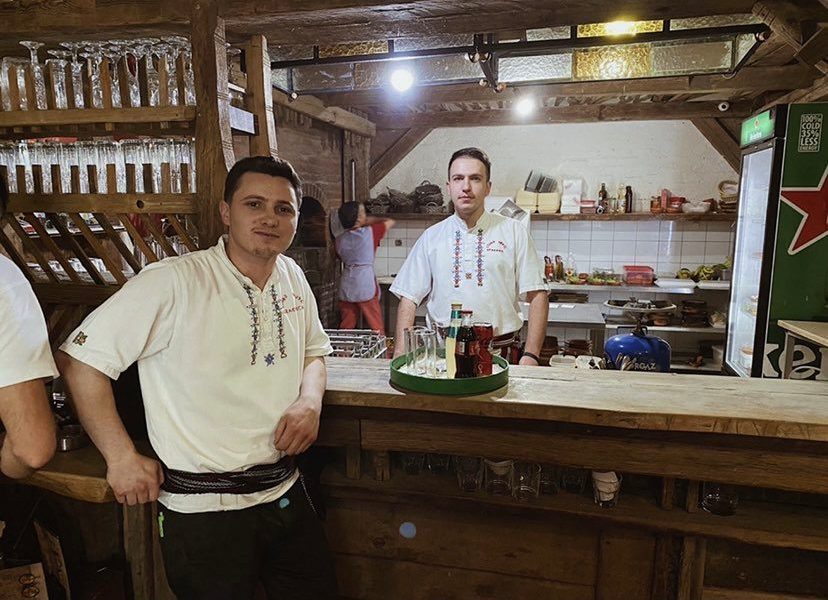 “Unfortunately, Mitrovica is still a city divided, in the human aspect,” is one of the most widely heard phrases since after the war.

Not only Mitrovica, but wherever Albanians and Serbs live, the place is divided.

However, not too far from the capital city, in the centre of Graçanicë/Gračanica, a Serb majority locality, there is a spot that brings both nationalities together.

It is a spot that based on its name and how it looks gives off the sense that it is visited only by the Serbian community but in reality, a completely another story unfolds in there.

A Serbian owner, Albanian and Serbian waiters, something that is rarely seen or heard.

Qëndrim and Uroš serve them all. This is their story.

History has divided the Albanian and Serbian peoples but these two young men are united by work.

To Milorad Nikolić, owner of the restaurant “Etno Kuća”, it was not at all easy to bring together workers from both ethnicities.

The owner of this restaurant said that rounding up the staff with Albanian and Serbian waiters was difficult, having in mind the past.

He said that currently, Serbs and Albanians have been working at this restaurant for many years.

Nikolić said that for over ten years now, ever since the restaurant opened, the Albanian and Serbian waiters never had any problems with one another.

“No, there have never been any grudges due to the past, I never had such cases and I never had any problems, they are close friends indeed. In fact, they have a lot of respect for one another, to the extent that I forget who is what. They have a good time together and the current situation or such problems do not bother them.”

Qëndrim Selmani, the waiter from Drenica, said that at the beginning, he hesitated to work there because of the past between the two peoples, and because of fear of prejudice from his friends.

“At the beginning, I thought about the Serbian owner and waiters, how it would go. It all turned out quite the opposite of what I had thought. The guys are hard-working, they are very nice, and so is the owner. The beginning was a little difficult as I was the first Albanian who started to work there, as before, there had been no other Albanians.”

Qëndrim said that he has very good relations not only with Uroš but with all other Serbs who work there.

Although, as he says, it was difficult to communicate at the beginning because of the language, he says that now he no longer has that problem.

“There have never been any misunderstandings or problems among us. In fact, I am the only one here who has earned all this respect. It was somewhat difficult to learn the language at the beginning, as I did not know the words, but after 3 months I managed to understand everything that was being said and now I have learned the language very well. If the Albanians and Serbs would get along with one another as well as we do here, it would have been perfect. Guests who come all the time know how well we all get along.”

The Serbian waiter Uroš Nedeljković said that for six years now he has never had any problems with the Albanian workers or guests, who visit this place.

He even says that there are no barriers between them, and that he and Qëndrim are very good friends.

Nedeljković, who speaks Albanian fluently, says he learned it gradually.

“I learned Albanian with the Albanian workers. I learned the words for fork, spoon, and knife, step by step as when I arrived I did not speak a work of Albanian. I understand the language entirely, even when Albanian guests put the order, I never need anyone to translate for me.”

Both communities live in peace for many years not only in this restaurant, where the Albanians and Serbs are known for warm relations, but in general in Graçanicë/Gračanica, a locality inhabited by a majority of Serbs.

The Deputy Mayor of Graçanicë/Gračanica, Leutrim Ajeti, said that undoubtedly the past has affected the relations between the two communities. However, he adds that in comparison with the frozen relations ever since after the war, this has changed over the years.

Ajeti emphasizes that there is a genuine cooperation between the Albanians and the Serbs in the Municipality of Graçanicë/Gračanica.

“Of course, the past has had a great influence as the first years after the war were challenging. However, we need to admit that time after time this has improved. I recall a time, right after, in 1999, it was very difficult, although I was just a child back then. I remember the challenges both communities faced. This has largely changed after 2008, so after the Independence of Kosovo. Progress in this aspect is noticeable, although it would be better if collaboration deepened further. Our municipality is calm and institutional collaboration between us as Albanians and the Serbs, who are in the majority, is very good. In fact, the heavy workload of the day makes us forget the barriers that existed before. So, I can state that in the professional aspect, our collaboration is good.”

Unlike in Graçanicë/Gračanica, the Albanians and the Serbs in North Mitrovica do not have good or close relations.

According to Veroljub Petronić, who leads the non-governmental organization “Humanity Centre Mitrovica” in North Mitrovica, it is difficult for the Albanian and Serb youth living in Kosovo to live and work together due to the numerous problems that were not their fault.

Petronić says that one of the key factors that penalizes these youth is the fact that they do not know the language, culture, and tradition of both peoples.

“Of course, the linguistic barrier is significant but not the most important, i.e., it is not the primary one. First and foremost, it is the total lack of knowledge about culture, tradition, habits, understanding, concept, and acceptance of ‘the other party different from us’. The Albanian and Serbian youth know nothing about each other. They do not accept one another in a global sense. They are ready to deprecate one another due to imposed antagonism, charged with historical and quasi-historical examples, to consider one another as stupid, evil; to make fun and threaten one another especially in social networks. There is a very small number of Serbian and Albanian youth who sincerely communicate in a friendly and neighbourly manner without any problems. Some would want to do that but they cannot for fear of rejection by friends and neighbours of their own community. Some do it in secret.”

Although 23 years have passed from the war between Kosovo and Serbia, the relations between the two states remain tensioned due to the past, whereas a permanent solution to normalize relations seems difficult to attain.