Home Contact About
Home The Museums of Kosovo: A Case Study on the Museum in Remembrance of the Berisha Family in Suhareka 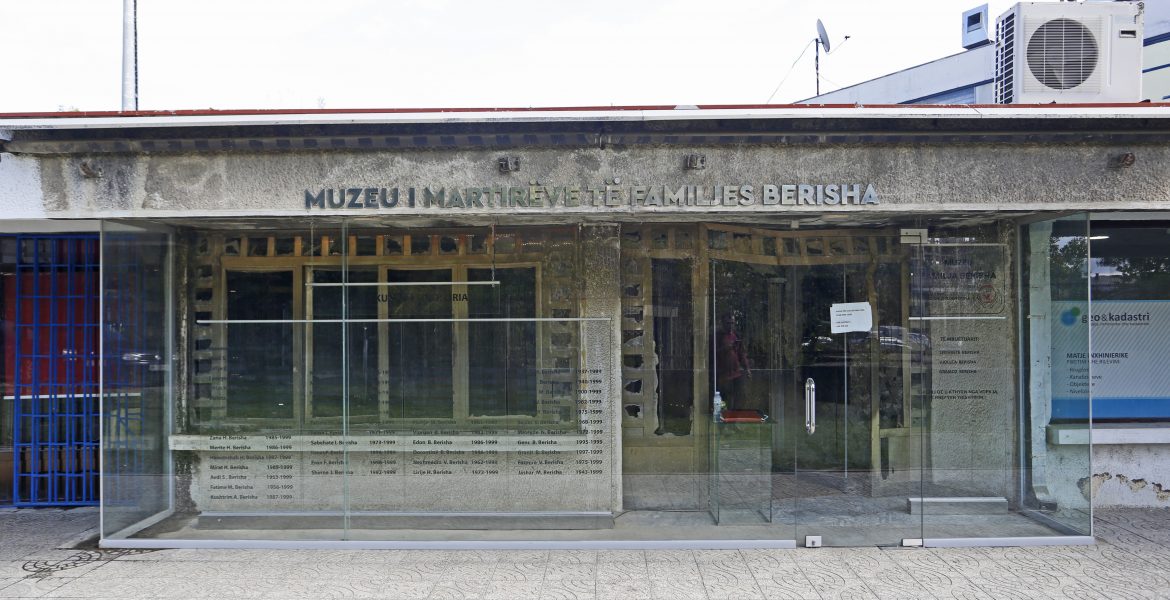 The Museologcial Landscape of Kosovo

During the war in Kosovo in 1998-1999 there were grave violations of the international humanitarian law among the Kosovo Liberation Army (KLA) and the Serbian and Yugoslav police and military forces: massacres, murders, forced disappearances, rapes, arbitrary imprisonments, demolition of houses, health care centers, factories, religious buildings (churches, mosques tekkes), historical monuments, violent expulsions (within and outside of Kosovo), lootings and so on. Unfortunately, almost no important monuments that were destroyed during the war of 1998-1999 have been preserved. Even those which have been preserved have not been conserved or transformed into a museum. Unfortunately, attempts to present this important period of our history in museums has resulted in unprofessional and non-objective representations.

The research, documentation, museological and methodological approaches on this period and the accompanying narratives regarding the war and its impacts on Kosovo were done in an extremely superficial manner, and consequently, representation of narratives, groups and communities has been entirely poor, the texts are poorly drafted, without being reviewed, edited, proofread, or corrected. Furthermore, the texts are mainly in Albanian only, very rarely in Serbian or neither in English. Although when the content of the texts in Albanian is not appropriate, there is no way how the English and Serbian translations be appropriate either. The collection and selection of photographs, video material, and artefacts was done in such a hasty manner, and let us not even talk about the design that seems to have been done by entirely novice enthusiasts.

Both largest communities in Kosovo – the Albanians and the Serbs – and both countries involved in the war in Kosovo in 1998-1999 – Kosovo and Serbia – present only the violations of the international humanitarian law by the other party, even exaggerating those and using hate speech. Thus, the parties not only are not cultivating the spirit of reconciliation among the younger generations but instead are further deepening the animosity. None of the museums in Kosovo, either at the central or local level, when presenting the crimes during the war in Kosovo in 1998-1999 do not commemorate the victims of war in Kosovo without ethnicity, language, religion, gender, political orientation or such distinction. The way in which these events are represented does not do honor to the victims of war in Kosovo during 1998-1999 and does not serve either as an educational-informational tool for the future generations, or as an informational tool for journalists, diplomats, politicians, scholars, and tourists

A Case Study: The Berisha Family Museum in Suhareka

Once the OSCE observers left Suhareka on 20 March 1999, and especially after NATO bombing against Yugoslav police and military forces started on 24 March 1999, the latter intensified violence against Albanian civilians. Thus, at noon of 26 March 1999, Yugoslav police forces surrounded the house of Nexhat and Faton Berisha, where OSCE had been staying until a few days earlier; brought all family members outside and murdered five men and one woman in front of the house. They forced the others to leave, however, when they reached the Shopping Centre, some tens of meters away from the houses of the Berishas, some 40 members of these families, mostly women and children, were brought inside ‘Calabria’ cafeteria.

Then, the Serbian police force members emptied their machine guns in a barrage on the civilians inside the cafeteria. The police left but retuned a little while later, likely they heard the voices of some of the injured so they threw inside some hand grenades. Later, they decided to load their bodies on a truck. Three people among the murdered pretended to be dead. Somewhere half the way to Prizren, the three wounded – Shyhrete Berisha, and later her sister in law Vjollca and her six-year old son Gramoz jumped from the truck. Inhabitants in the area where they were found offered them medical assistance and took care of them, and, a few weeks later, aided them to cross over into Albania.

The police forces buried the bodies of the people who were massacred at ‘Calabria’ cafeteria in the shooting range of the Yugoslav Army, in the vicinity of Prizren, known as Kroni i Popit (Priest’s Fountain). However, in the beginning of April 1999, workers of the cleaning enterprise ‘Higijena’ of Prizren, acting on Ministry of Interior orders, exhumed and transported them to a mass gravesite in Batajnica, Serbia, from where, in 2001, some of them were exhumed.

According to HLC data, on 26 March 1999, the Serb police forces in Suhareka murdered a total of 49 persons from the Berisha family. Of the murdered, 24 are male and 25 female; 15 are under 16 years of age, and the youngest of them all, Eron Berisha, one year old; three are over 65-years old, with the oldest, Hatixhe Berisha, being 99-years old. All are Albanian. To this day, 20 of the massacred of Berisha family are in the list of the missing.

Shyhrete Berisha, one of the three survivors, testified at the ICTY against the President of the SFY, Slobodan Milošević, and later against the main Serb and Yugoslav political, military and police leaders. The ICTY established in one verdict that none of the executed of that massacre had been armed or had participated in the armed conflict, and that the only reason for being murdered was because they were Kosovo-Albanian.

A Rare Place of Remembrance in Kosovo

I do not know of any other space where war crimes or crimes against humanity were committed in Kosovo in 1998-1999, to have been preserved and placed under protection or care of local or central state bodies. Fortunately, the building of ‘Calabria’ cafeteria has been preserved as it used to be, with all the marks testifying the massacre against the Berisha family, and it has been placed under ownership of the Municipality of Suhareka, which transformed it into a museum a few years ago. Recently, thanks to the financial support by the ‘Golden Eagle’ company, on the 20thanniversary of this massacre, the space was conserved.

The names of all murdered persons are written at the Museum of Martyrs of Berisha Family in Suhareka. Artefacts, mostly items of clothing belonging to the massacred, found in their graves in Kosovo and Serbia, and photographs mainly made by family members during the exhumations and reburials are placed there. Although a great deal has been done to protect the building and all the marks in it, and to place the entire space under municipality ownership and conservation, a lot more remains to be done still.

To complete the museum, it would be good if the Municipality of Suhareka and the Ministry of Culture, Youth, and Sports, in collaboration with the Berisha family, to assign a team comprising of war crime investigators, historians, lawyers, psychologists, architects, designers, photographers, and so on. This team would be tasked with collecting from local, regional, and international photographers all photographs related to this massacre; video-materials from Kosovo, Serb, and international televisions; articles published in local, regional, and international newspapers; reports from human rights non-governmental organizations in the country, the region, and worldwide, and the decisions of the judicial authorities of the War Crimes Tribunal in Serbia and the International Criminal Tribunal for Yugoslavia at The Hague.

The massacre against the Berisha family at ‘Calabria’ cafeteria in Suhareka is almost the only one for which there are decisions by the justice bodies in Belgrade and in The Hague, data from which should be presented at a museum like this. In February 2009, the ICTY established beyond grounded doubt that Sreten Lukić, commander of the Serbian Police in Kosovo during 1998-1999, was responsible also for the massacre in Suhareka, and sentenced him to 20 years. Likewise, in February 2011, the ICTY found that Vlastimir Đorđević, head of the Public Security Department at the Ministry of Internal Affairs of Serbia was guilty of the murder of Kosovo Albanians, among others, in Suhareka, and therefore sentenced him to 27 years of imprisonment. Furthermore, on 25 April 2006 the War Crimes Prosecutor in Serbia filed an indictment against eight Serb police officers for this massacre. After three years of trial, the War Crimes Tribunal in Belgrade found guilty four of the accused and sentenced the Serb police commander in Suhareka, Radojko Repanović, to 20 years, and the three Serb police officers, Slađan Čukarić, Miroslav Petković and Milorad Nišavić, to 20, 15 and 13 years respectively.

Such data create the conditions for a comprehensive narration about the massacre at ‘Calabria’ cafeteria in Suhareka on 26 March 1999. This narration should be accompanied by photographs, video, and artefacts, all curated with plenty of care and professionalism. Additionally, the entire text, apart from being in Albanian and English, should be made available in Serbian too. Not only because Serbian is legally an official language in Kosovo but also because the Kosovo and Serbia Serb visitors to this museum would learn what has happened in this space.

Shkëlzen Gashi studied Political Sciences at the University of Prishtina, and Democracy and Human Rights on the joint study programme of the Universities of Bologna and Sarajevo for his master’s degree. He is the author of numerous publications (books and articles). In 2010, he published the unauthorized biography of Adem Demaçi (available in English). Demaçi has spent 28 years in Yugoslav prisons. Recently, he has published numerous articles about the presentation of the history of Kosovo in the history textbooks in Kosovo, Albania, Serbia, Montenegro, and North Macedonia. He is currently writing a biography on Ibrahim Rugova, the leader of the Albanians in Kosovo from 1989–2006.